America's story to become "a more perfect union" is a struggle for rights and acceptance for groups that are outside the norm of white, Anglo-Saxon men. These include, women, African Americans, wounded veterans, the physically handicapped, the mentally challenged, and gays and lesbians. Each of these groups have made progress and become more integrated into society. Their emergence always started with stories that make others see them as people.

There's something about the written word that levels the playing field, especially when it comes to hearing the voices of people who are often deemed "other." There are no distractions. The reader doesn't see the writer's limitations or physical differences that might provoke bullying or mockery or distancing. Words have a life of their own and, skillfully crafted, can illuminate dark corners filled with prejudices and biases. 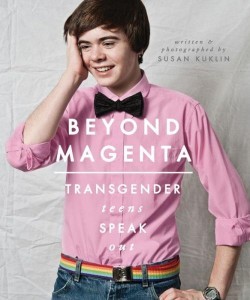 Susan Kuklin's book for young adults, Beyond Magenta: Transgender Teens Speak Out captures the voices of six young people who have struggled with their gender identity, a different issue from sexual orientation. For those of us who have no ambiguity when it comes to one's personal psycho-sexual identity, this book is an eye-opener. It is so easy to dismiss people who appear to be "other;" to ignore how much we have in common with them because we're so focused on the differences. Through extensive interviews, Susan Kuklin has captured the thinking and personalities of each subject in this book. Her sensitive photographs shows them as interesting people who have struggled to understand themselves and how they each, in their own unique way, differ from the norm. Here's Christina: 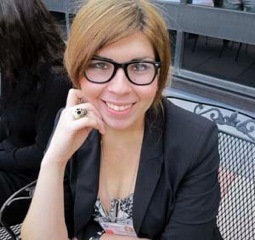 What comes through loud and clear is their humanity, the depth of their suffering, and their courage to embrace their differences and show the world who they really are. The teen-age years are a tumultuous period for even the most "normal," well-adjusted and secure human being. Now imagine feeling as if you are in the wrong body; that even the most basic categories of "male" or "female" don't apply to you. Thanks to Beyond Magenta you no longer have to imagine. Susan Kuklin introduces us to some extraordinary people you just might want to know. They expand and enrich the spectrum of individuals who belong to the human family.

Beyond Magenta is written for ages 12-up. You can read stellar reviews here and here.