When my son Harry was in second grade, I used to joke that I was sure in another life he'd been a passenger on the Titanic. That was in 1997, and his near obsession lasted more than two years. He just couldn't get enough of the people and the story of the doomed luxury liner. 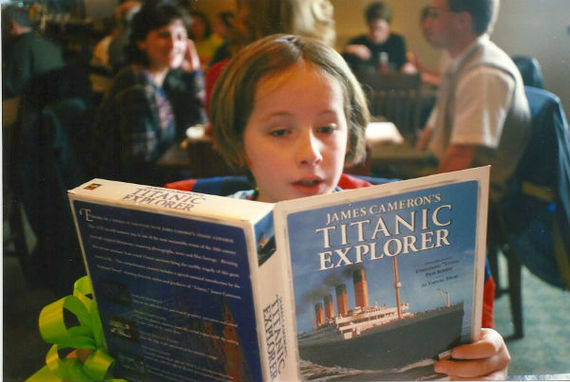 His love of all things Titanic began with the non-stop promotion of the James Cameron movie, released that year at Christmastime. Between then and the fall of 2000, when I took Harry and his friend Nik to see the touring Titanic exhibit at Chicago's Museum of Science and Industry, my son read every book our local public library offered on the subject. He studied the passenger list, the deck plans and the facts. He knew a ton of Titanic trivia. And he drew full-figure portraits of the two most notable women on board: Molly Brown and Madeleine Astor. Maybe he had been one of them, I thought.

Something my now-24-year-old son said at dinner Saturday night got me thinking about his childhood interest in the ladies Astor and Brown. I wondered if I had completely misunderstood his focus on the women of the Titanic.

We were out with his boyfriend and our pre-cocktail topic was Orange is the New Black. Harry's boyfriend had just finished an OITNB and Scandal marathon.

"Have you watched Scandal, Mom?" Harry asked. "I think you'd really like it."

"I've seen a couple of episodes," I replied, "but I forget when it's on. And I don't like watching movies or TV on my computer."

Then to shift the subject from my old-school viewing habits, I remarked on the 12 Emmy nominations snapped up by OITNB. "Maybe it's going to be the new Breaking Bad and win best of everything for the next four years."

Harry and his boyfriend had never watched Breaking Bad. I admitted I hadn't either. I just wasn't into a show about a meth dealer, no matter how good it was.

"I never watched it because there are no female characters," Harry said. "I mean, why watch a show when there's no one to relate to."

And then it dawned on me. The handsome, bearded young man sitting next to me at the restaurant didn't just idolize female characters, he related to them. He identified with them. And I don't think I'd made that overly obvious connection until this week. That's when I remembered Harry's fascination with Titanic actress Kathy Bates. But it wasn't Kathy Bates at all. My 9-year-old had identified with her portrayal of Titanic heroine Molly Brown.

He'd told me that when he was a toddler. Not in so many words, and without mentioning Molly Brown, of course, Harry was only two when he told me that "inside" his head he was a girl. But I didn't know much in 1992. I was a mother with limited experience and few informational resources. Sex and gender meant the same thing to me, and both referred to the two boxes on my passport application. I sometimes felt confused by my son in those days.

Even if Harry as a toddler and growing boy couldn't articulate with the terms and language of gender identity and expression that exist today, he knew instinctively that in his head was where his true identity resided. While he was happy being a boy, he felt more girl than boy on the inside.

I'm hopeful every child is allowed to acknowledge his or her inner self, regardless of when it happens or how long it takes. And I like to think now of gender identity itself as a head-of-the-fleet luxury liner, one that deserves to be launched in celebration and revered by all.