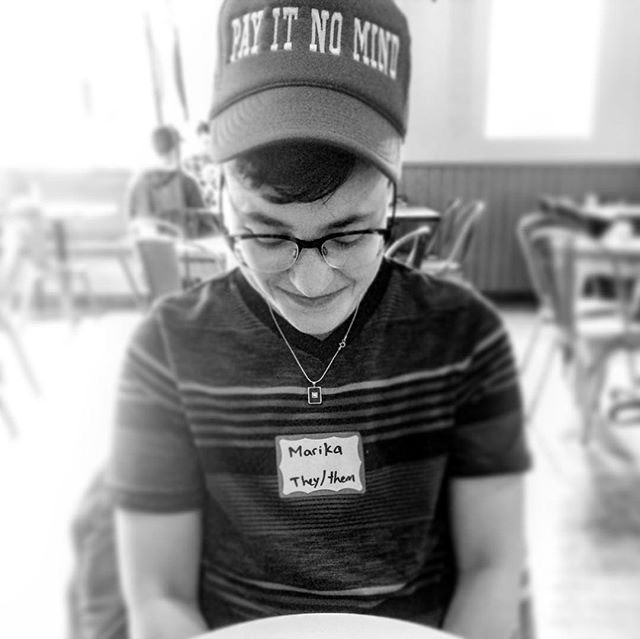 I came out as a tomboy at 4. Bisexual at 17. Lesbian at 18. Queer around 22. Genderqueer/non-binary at 24-ish. I'm wrapping up my 26th year and only 3 people out of my 959 Facebook friends --  this data seemed to get my point across --  use the correct pronouns for me, which is the singular they/them. I'm having this pep talk with myself because this is my declaration to change that number.

Backing up a little bit.. the first time I realized something different about my gender identity was sometime in college when I was filling out an application online and came to the drop-down section labeled 'Gender.' I clicked on it and could choose from either 'Male' or 'Female.' I just stared at the two options for a minute and felt troubled by what I was seeing -- neither one really represented me. It wasn't like this was the first time I was coming across this question, but all the sudden what I felt inside was not an option to choose from. This wasn't me trying to be profound or creative, this was me trying to quickly get through the monotony of filling out basic information on an application but then coming up against this massive road block. At the time I didn't fully understand what I was feeling was that my gender identity wasn't actually what I thought it had been for my entire life. I was not 'female': what I had been assigned at birth and what I had thoughtlessly identified as for so many years. I was experiencing firsthand that gender was a spectrum; and some people fall on one side or the other, and then there are some people who fall somewhere in the middle. I fell somewhere in the middle. I had already experienced what it was like to discover my sexuality, but this felt like an entirely different revelation because there were no precedents for this in my known world. This was the very beginning of me learning and growing into the non-binary person I am today.

Now I'm ready to publicly say, 'This is me, and I feel really secure and happy to share this side of me with you. You mean a lot to me and I want to connect with you on personal level, which requires you to see me for who I am.' I consider this a pep talk to myself because even though I'm beyond ready to incorporate this into my daily life (a.k.a. go to battle everyday trying to get the outside world to see me as neither female nor male), there's still some fear and anxiety around asking people to change their language for me. I'll feel more confident, and at ease, facing the world if I've openly communicated my thoughts and done my best to try and educate those who aren't familiar with the idea of gender as a spectrum.

There's still some fear and anxiety around asking people to change their language for me.

My initial fear of asking people to use gender neutral pronouns was about how I felt like it would get in the way of communication. When someone is getting newly acquainted with using the singular they/them in conversations there are a lot of slip-ups. The conversation continues but there's a lot of internal thought around the pronouns being used and then everyone, including myself, is dividing our focus on pronoun usage and whatever the conversation was actually about. The problem I keep running into is that I'm not asking everyone to use they/them for me, and therefore when I'm referred to with female pronouns no one thinks anything of it but me. I temporarily check-out from what the other person is saying, even if it's just for a second or two. I'm the one feeling a little shaken, isolated, and unseen in that moment. My personality is one that doesn't want to make you uncomfortable, and furthermore I don't want you to go out of your way for me. However, after feeling the effects firsthand of being accurately identified (by those 3 wonderful people), I've concluded that this really isn't about asking people to go out of their way for me, but it just comes down to respecting each others' gender identity and supporting the humanity that's all around us. 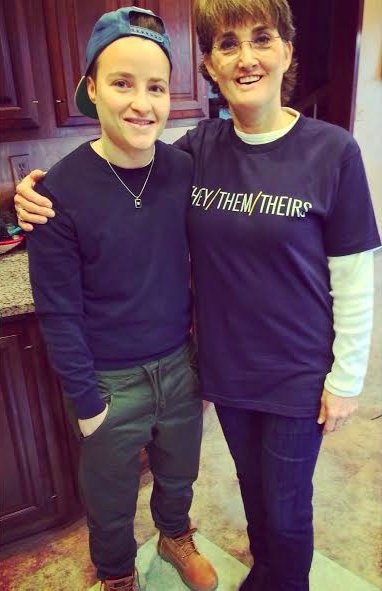 There are responses I will inevitably, and understandably, hear when I ask people to use gender neutral pronouns for me. I have now taken some time to write out my replies to these responses.

"It's difficult to use a plural pronoun when talking about one person."

Yes, it throws you off at first. It's hard to get used to. We grow up learning the grammatical rules of singular and plural words, and now I'm deliberately asking you to expand your association with these known words to make me more comfortable. Our brain has been trained in a certain way and it feels like we're going against the grain to use they. I can't exactly tell you why it's become an accepted, and common, pronoun among non-binary folk, but it has, but I can tell you that it feels right for me. They fits nicely because it's a familiar word and it doesn't have any gendered connotation. When people place me at one end of the spectrum by using she I feel a cascade of societal associations dumped on me in that moment, associations that I do not feel like I actively chose, but rather other people chose for me. Whereas when people use they I feel like they're seeing me as I present myself, which is as a non-binary person.

"The other person in the conversation won't know who I'm referring to."

Some people might not understand who you are talking about if you are using non-gendered language when referring to a specific person. Sometimes an easy solution is just to use the person's name to avoid any confusion. However, if you are using pronouns it might puzzle the listener, and as a result you'll probably find yourself in the teacher's seat. One thing that gets exhausting for people, of any minority, is the need to constantly educate. I'm someone that really believes in sharing this part of my life in an open way to not alienate but rather unify. With that said, feeling like you're always needing to educate the person you're talking to can be tiring. Just like me you'll have to decide when to educate and what words you're using to inform your listener. OR you might decide to skip the educational moment -- and just by using the correct pronouns in the conversation you're giving respect to the person you're talking about and visibility to the notion that gender is not just black or white.

The "change is hard" response:

"We've always known you as a girl and it's hard to switch."

I hear you, change isn't easy. I knew myself as female for a long time too, and over time I evolved and learned that what I knew was just what I was taught. Our gender is in the spotlight before we even come out of the womb -- so it definitely takes time to undo all those learned societal expectations and associations to then begin to think about who you are at your core without those norms and stereotypes blurring your view. Now that I've investigated and drawn my own conclusions about my gender I'm taking the steps to live freely and openly, and asking my world to support me as I go.

Some people cut their hair and it takes a little while for both them and the people seeing them to adjust; other people realize the gender they were assigned at birth doesn't actually suit them and they have to face the world with a lot more than just shorter hair. I understand that the people who have known me the longest have a very clear idea of who I am to them; but I am constantly learning and growing, and I hope that the people I include on my journey will only want to support my evolution.

Practice makes perfect. It does. Trust me. Before I identified as non-binary I had a friend who requested we used gender neutral pronouns for them. I messed up all the time. I felt awkward about it. It was a hard transition. But eventually I got so accustomed that anything but they/them felt incorrect for this person. It was just a matter of re-training my brain. It was eye-opening to understand and feel how gender neutral pronouns have no relationship to gender stereotypes, and how my thoughts about that person were then free of any preconceived associations. Instead of subconsciously having certain boundaries for them based on our learned ideas of femininity and masculinity, their lack of an assigned gender became a blank slate, an open forum to let their expression dictate their own identity. Ultimately the idea that gender is a spectrum began to take shape and I started to see people and their expression as fluid. This fluidity led to less overall judgment of other people, which led me to intrinsically experience more acceptance of the world around me.

Sometimes we slip up and use the wrong pronoun --  and that's ok! Messing up isn't what hurts. What hurts is the repeated misgendering and a lack of commitment. No one ever expects you to flip your vocabulary overnight. Flubs are totally understandable. I still occasionally will mix up pronouns for someone that has asked me to use they/them. If you do make that mistake, just correct yourself in the same sentence and move on. Nobody wants to linger on pronoun usage -- trust me -- there are numerous conversation topics out there that are a lot more interesting than pronouns. People just want to be seen as who they are.

"Messing up isn't what hurts. What hurts is the repeated misgendering and a lack of commitment."

It can be a scary thing for us to ask our friends, and furthermore our families and coworkers, to use language that makes us feel acknowledged and accepted when, in a lot of cases, these people have never been asked to do this before. I am reminded every time someone uses female pronouns for me how there is this slight interpersonal disconnect between the person I'm talking to and myself -- and that's what I am trying to change. I want to be able to openly and confidently share myself with others because, for me, this is the foundation for genuine communication, and moreover, deeper connections with people. I know this public declaration -- for the use of gender neutral pronouns -- is a necessary step in my personal progress and in strengthening all the relationships in my life. What's the point of having all those Facebook friends if only a few actually know me anyways.