My son is over 2 years old now and he's never had his hair cut. His hair is quite long and very curly, and as a result strangers occasionally mistake him for a girl.

The first ten times it happened, I was annoyed. But eventually it got me thinking: Would my son make a good-looking girl? And how would my life be different if I had a daughter instead of a son?

The answer to the first question is an unequivocal YES. He would be a beautiful little girl. He has perfect skin, gorgeous hair and absurdly long eyelashes. Pretty sure he'd be walking runways, if he were a she.

The second question is more complicated. I only have the one kid, so obviously I've only done the son thing. But even without having a daughter, I'm pretty sure the early stages of raising a girl aren't all that different from the early stages of raising a boy. The first few months are a total wash (literally -- you'll be doing laundry NONSTOP for the first year, at least). Once the personality starts to emerge, it starts out pretty gender neutral and likely remains that way until about the year-and-a-half mark. That was when my son started doing more boy-centric stuff.

He's barely over 2 and he's just now really getting into cars and trains and playing catch, etc. But he also loves his stuffed animals and plays with my wife's makeup brush and occasionally wraps things around his neck, like a boa. So while he's been gravitating towards more stereotypically male interests, there's still a bit of overlap. Which is totally fine -- he's 2! And my wife and I try not to stifle any instinct he may have, one way or the other. He'll figure himself out, eventually, and we're not going to stand in his way. After all, I'm at home all day, so what right do I have to limit his choices?

So when he seemed to really enjoy a friend's play kitchen, despite objections from some traditionalists in our circle, we got him one. And when he wants to play catch with his little football, we let him. Maybe he likes trucks and fire engines more than the average girl, but it also seems like he likes to dance more than the average boy. Parents seem to agree that boys are dirtier and more rambunctious, which may be true; my son is certainly a bit of a spaz these days. And he is usually pretty filthy. But he also HATES when his hands get dirty, whether it's from eating or playing in the sand or picking his nose, and begs us to clean them off immediately. I'm not actually sure if that's a gender-based thing or just common sense. Sticky hands are nasty!

The TV shows and music he likes are pretty gender neutral too, or so I assume. Every kid likes Elmo, right? And "Yo Gabba Gabba" is pretty devoid of any gender signifiers, unless you want to have a discussion about the geometry of Moono. I do not.

I really feel like the only thing that would be significantly different about having a 2-year-old daughter would be the clothes she would wear, and that wardrobe would be largely be under my wife's control (and full of dresses and hats and sparkly things). I'd also guess that a little girl might be more into princesses than superheroes, but that needn't be the case. To be honest, I'd make damn sure my daughter liked Superman, regardless of whether she liked Cinderella too. The same way my wife is going to make sure my son enjoys musicals, even though "Die Hard" might end up being his favorite movie. These things needn't be mutually exclusive.

We really don't care about our child's gender; we just want it to be happy. If that means veering outside the lines of stupid, often arbitrary gender assignations, so be it. It's not our job as parents to decide who our son will be; it's our job to help him become the best version of that person he can. So he'll get exposure to a whole world of interests, regardless of what gender they're typically associated with, and then he'll get to choose what he likes best, without judgment. Odds are it will be a mix of boy stuff and girl stuff. And if strangers want to keep mistaking him for a girl, that's their problem. Hopefully we'll instill in him enough self-confidence to be himself, regardless of what a still-largely-traditional world may think.

We won't go so far as denying his gender, or pretending he's something he's not. We'll let him decide for himself, somewhere down the line. But we will probably get him a haircut soon. He looks like a mad scientist when he wakes up. 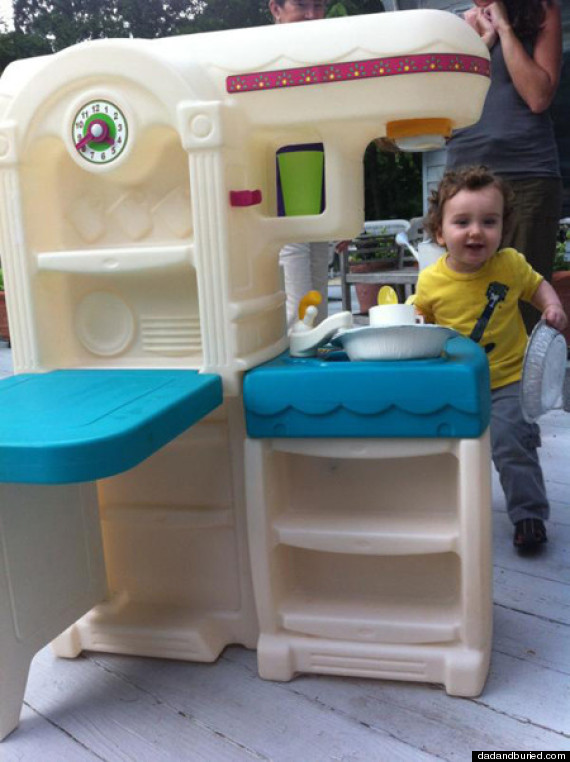