One topic that spawned plenty of conversation during the race for the presidency, was the
role of gender. Last week, New York Women In Communications presented The Spin Room: Gender, Politics & Media in the 2008 Election. The panel of four, Geraldine Ferraro, Arianna Huffington, Lesley Jane Seymour, and Marie Wilson -- with moderator Carol Jenkins at the helm -- dug into a range of issues navigating territory that has been well-trod, albeit without resolution.

Jenkins, President of the Women's Media Center, kicked off the dialogue with the question, "Was the reaction to Palin of 'Sarah, be quiet' the same dynamic that had happened with Hillary?" Ferraro, the first female Vice-Presidential nominee (1984) jumped in to field the question. "What's going on with Sarah didn't go on for me," she said. "She's in a different place. She's come out with a lot of negatives." Despite her ideological differences with Palin, Ferraro stressed, "She has to speak up. She's a sitting governor."

The inevitable topic of the $150,000 wardrobe surfaced, along with the unattributable quotes that surfaced about Palin's aptitude and behavior. Huffington offered, "The media has a responsibility not to repeat stuff that is anonymous and can't be validated. But let us not forget
the reality about Sarah Palin. She's an arrogant know-nothing. She must take responsibility for the negative stuff she said. That is who she is." Huffington added, "We don't have to defend her because she is a woman."

Wilson, Founder and President of The White House Project -- which works to get women into leadership roles -- steered the discourse back to the press. "We're here to discuss the media's role," she said. Wilson saw the press as "enabling" Palin through it's "chivalrous" approach, which she equated with "paternalism.' Wilson pointed out, "People think because she [Palin] is a leader, she is a feminist." She continued, "What I feel didn't get focused on in the media was Sarah Palin getting people revved up around race, especially in a time [when] we need to make connections."

Editor-in-Chief of More Magazine,
Lesley Jane Seymour, spoke about Palin in the context of politico-tainment. "She is the people's version of politics. She can connect." Seymour acknowledged to the room full of women in the communications field, "We live in a bubble. [Palin] is a post-feminist feminist. I would put her on the cover, because I am interested in any woman over 40." She referenced the empathy factor for Palin, and that women could identify with her. Suggesting a converse aspect to the outrage about Palin's clothing allowance and make-up artist, Seymour offered the premise that the McCain campaign had been "dressing her like a little doll." Hadn't the McCain advisors in essence diminished Palin with their own sexist treatment?

The general consensus was that Palin had to be separated from her views, in order to accurately assess how the media treated her. Ferraro, who believes there was pervasive sexism during the primary debates, repeatedly stated that there needed to be an "independent," non-partisan study on sexism during the 2008 election. Wilson suggested, "Numbers matter." While there was a net gain of four women in the Congress, American women still rank 69th in government representation compared to women globally (Rwanda is in the top position for the highest percentage of women representatives).

Huffington singled out Campbell Brown's contributions to mainstream media as "very significant." Coming from an online independent media point of view, Huffington appreciated Brown's approach of "challenging the concept of journalism" -- from the tradition based model of "telling a story" to "ferreting out the truth." Ferraro disagreed. "What is happening in this country?" she asked. "When you are writing news, you should be reporting." She reflected on how the tone of articles and opinion columns has become indistinguishable, and proposed that was part of the underlying problem.

"This is about the culture," Wilson flatly stated. "It's bigger than the media." She continued,
"You can't talk about gender and race without examining class. The base in the Republican Party is about abortion and gay rights. The Palin choice was about the base and recouping it."

Questions from the audience reflected a hunger to examine a wider range of issues. One frustrated attendee prefaced her query with, "Look how much time we're spending on Sarah Palin, and what does it say with her as a choice?" The composition of Obama's future cabinet came up, specifically the consideration of Larry Summers. "We're all scanning Obama's choices," said Seymour. "We have to make our voices known." Wilson noted that seven out of ten members of Obama's transition team were women. "We need to put out the name of two or three women who should be in the job," she said.

Ferraro stressed, "I believe every time a woman runs, we win. It's a pebble falling into a lake.
If we get nothing else out of her [Palin's] candidacy and Hillary's, we may have gotten a little bit of sensitivity." When I spoke with Ferraro on the telephone to find out more about her concerns, she reiterated the need for a study and mentioned the work that has been done by the Shorenstein Center at Harvard. Nancy Palmer, the Center's Executive Director, referred me to the conference that had been held in November 2007 entitled Women and News: Expanding the News Audience, Increasing Political Participation, and Informing Citizens.

There is still much more that needs to be done to rectify gender bias. "We've got to give a heads up to the nation," Ferraro said. "Women have to be treated the same as the guys." 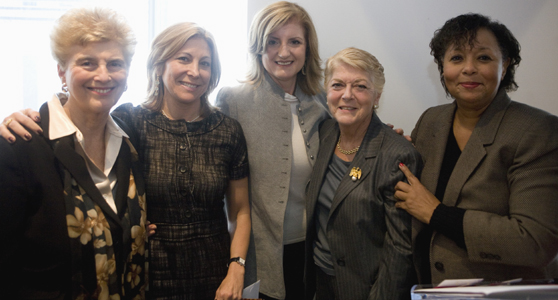