Marc Choueiti and Kate Pieper contributed to this post.

Think back five years ago -- 2007, to be precise. Pre-Obama White House, pre-Half the Sky, pre-Anne-Marie Slaughter, pre-Sheryl Sandberg's Lean In. Given the advocacy and activism we've seen since then, the host of books, documentaries, articles, and speeches designed to push girls and women forward, things should be getting better for females across the board. Right?

Our new study, released today and featured in the LA Times, demonstrates that there's still work to do for girls and women, at least where popular films are concerned. We examined five years, 500 top-grossing films, and more than 20,000 characters, and concluded that the number of female characters in popular entertainment fare remains steady at around 30 percent (see Table 1).

In 2012, we saw the lowest percentage of female characters across the years studied. Just 28 percent of the more than 4,000 characters on screen are female. We also examined the age of characters -- women are younger than male characters, with the number of female characters over age 40 hovering around 23 percent (see Figure 1). Perhaps this is good news for aspiring female actors in their 20s, but it confirms the notion that women "of a certain age" have a sell-by date when it comes to the big screen. 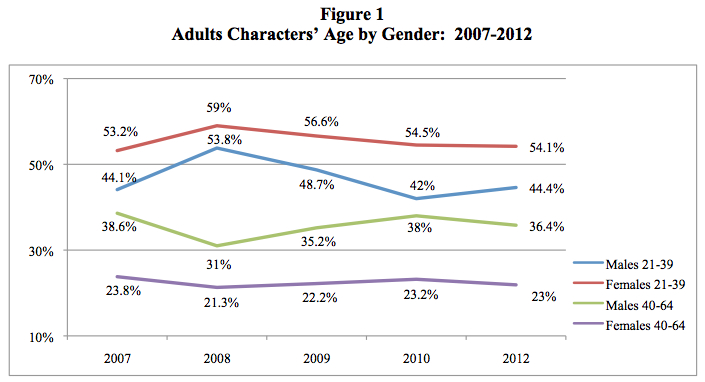 The young women we see populating these films are not presented in the same way their male counterparts are, either. We saw a rise in the hypersexualization of teen girls in particular. Compared to women aged 20 to 39 and women over 40, teen girls are more likely to be shown in sexually revealing clothing or with some exposed skin in the mid-chest to high upper thigh region of the body. This is what the five-year trends for partial nudity look like for women in these three age groups (see Figure 2). 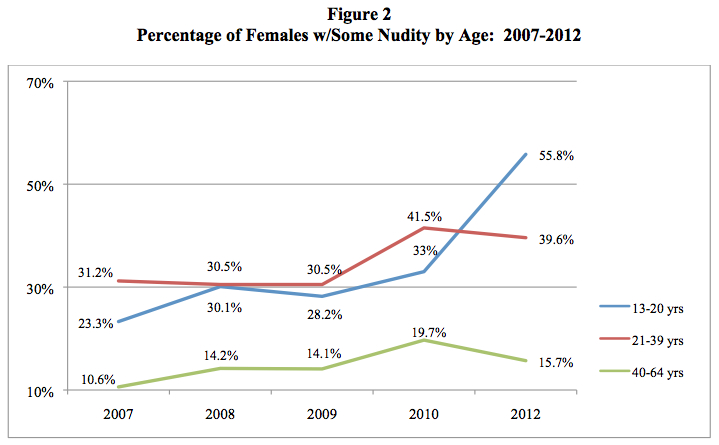 Women in front of the camera are dramatically outnumbered by men, but the story is even more unfortunate for women behind the camera (see Table 2). For the last five years, the percentage of female directors varied from 2.7 percent (low) to 8 percent (high) across the 100 top-grossing films each year. Female writers fare slightly better -- less than 15 percent of the scribes in popular films are female across the five years. Even when we included producers, women were outnumbered 5 to 1 behind the camera in 2012.

When we release studies like these, or like the one we released in January, people often ask why these numbers matter. Why does having a female behind the camera make a difference? Why should we have more women on screen? 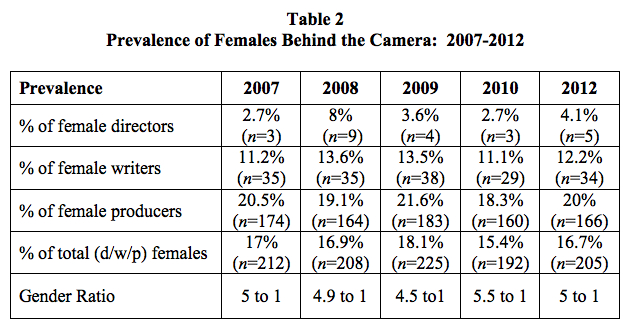 We typically tell people: half the population is female. Half of moviegoers are female, according to the latest MPAA statistics. There's a clear disparity between the number of women in the seats and the number on the screens. 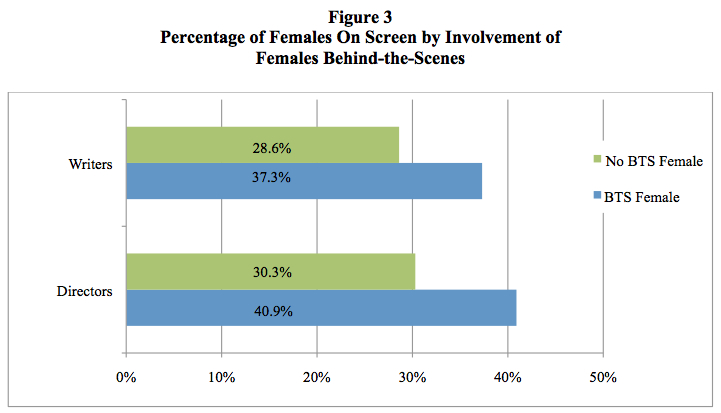 This is the first time our team has examined hypersexualization in relation to content creators across a large, multi-year longitudinal sample, and we intend to investigate it further. In the meantime, we think there are a few explanations for these findings, including that the typical fare females are given or choose to direct or write may be different than what males are hired to helm or craft.

Explaining the noticeable consistency in the number of female characters is also important to us. This type of study -- examining content -- doesn't allow us to make any causal statements about why females are underrepresented, though. It may be that entrenched industry perceptions and beliefs about market forces and male audiences contribute to perpetuating the status quo. Unconscious cultural or traditional stereotypes about occupations and sex roles might unwittingly seep into characterizations and fictional, even fantastical, realms.

As researchers, we often spend our time looking backward -- at trends and patterns that illuminate how far we have or haven't traveled toward equality on screen. Looking forward, there are a few things that might make the next five years look different than the previous five. Putting more women behind the camera as directors and writers is a start. Thinking about female audiences as something other than part of the four-quadrant or niche is another. Lastly, the simplest solution is to populate mediated worlds to match the world we live in -- a world where half the people on the street, in the hospital, at the coffee shop, and in the theater are females.