Sugar, spice and everything nice is what little girls are made of. So, what are little boys made of? I never actually thought to ask myself this until I went to BIL 2012 this weekend. I found myself at a talk entitled "Act Like a Man: Masculinity & Sexuality in Modern America" by Charlie Glickman, Ph.D. Charlie Glickman Ph.D. has been a sex-educator for over 20 years. He runs the education programs at Good Vibrations. Being a man in today's world is not an easy job these days. 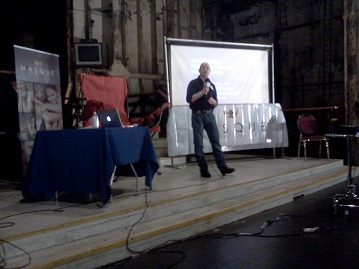 For as critical as women are of men's "caveman" behavior, let's take a step back and look at where it stems from. Men are encouraged to be aggressive, macho, and abrasive. They are often criticized if they don't conform to that stereotype. If a boy is sensitive growing up, then he is a sissy or a baby. Anytime men show vulnerability or emotion they are often punished for it.

As much as we want to progress as a society, men are not given enough room to behave simply how they want to. How many times have you heard someone say "Be a man" or "Man up"? I have found myself saying these things throughout my life. As much as we discuss the troubles women have, we don't ever look at what men have to contend with. God forbid they show any femininity. Then they are a "faggot," "pussy," and all these other gender-negative stereotypes. During the conference I had the pleasure of hearing Dr. Glickman speak on this topic.

"For the last few decades, there have been more and more conversations about feminism and gender roles. Most of the conversations about men and sex have actually come from women. While it's valuable, it's simply not enough to understand the spectrum of masculinity," says Glickman.

Men should be given more room to express themselves in our society. According to Glickman, it starts at home with mom and dad. Our language has a huge effect on behavior. Little boys shouldn't be raised with the same gender-negative stereotypes.

I think that a lot more men feel this way than they admit. Dr. Glickman teaches a workshop on this very subject, called "Act Like A Man: Male Gender Socialization." Despite the increasing dialogue about gender roles in modern society, there is little understanding of how masculinity is defined, taught, and enforced. The more we explore these dynamics, the easier it becomes to address them, find new ways of moving through the world, and bring a sense of both compassion and accountability to our lives. This workshop can be adapted to meet the clinical needs of non-profit service providers and professionals.

Honestly, men have a whole set of societal expectations that we don't take into consideration. Men are not allowed to experiment with their sexuality, show femininity, or not fit with what is the typical picture of what a man is supposed to look like. Next time you find yourself using the term "Man up," think about it. I did. You could just say, "Be an adult." Why does a gender need to be assigned to it? Times are a-changing, and hopefully attitudes will as well.