The gender pay gap is alive and well everywhere in America, but it's more alive in some states than in others.

It will take 144 years before Wyoming women working full time and year-round make the same as their male counterparts on average, according to an analysis from the Institute for Women’s Policy Research, a think tank focused on women’s economic issues. By contrast, women living in Florida should see the gender pay gap close there in 23 years.

This chart from IWPR shows when the gender pay gap is projected to close in each state: 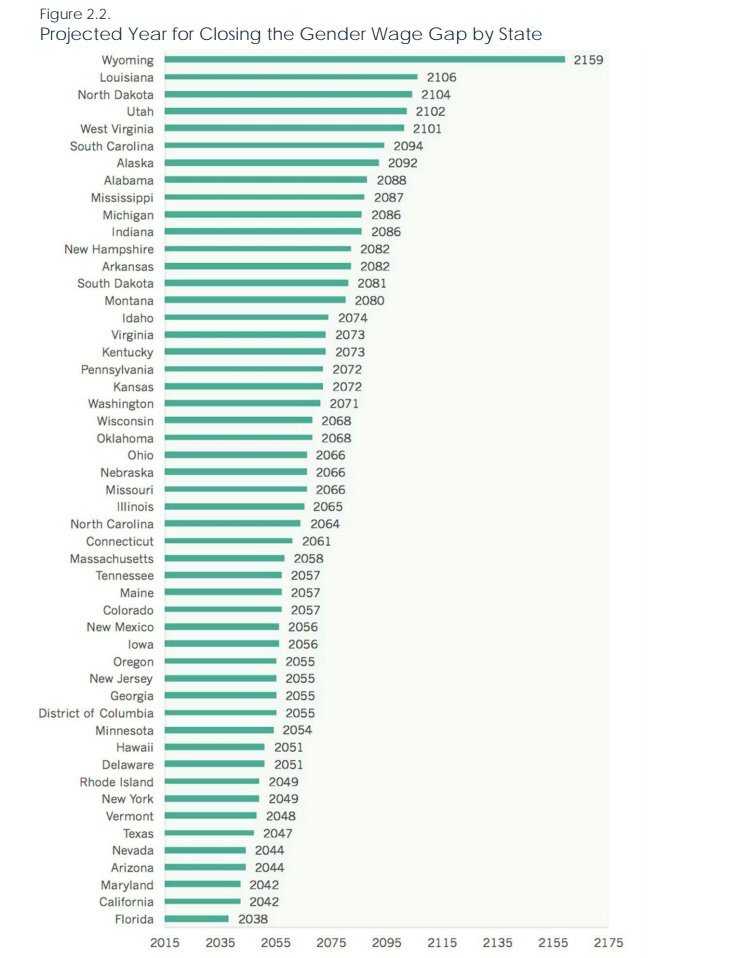 The researchers’ projections are based on each state’s rate of progress at closing the gap since 1959. American women overall shouldn’t expect to see pay equity until 2058 if progress continues at its current rate, according to the analysis. Progress on closing the pay gap actually stalled in recent years because the earnings of both women and men have stagnated.

There are a variety of reasons why the gap persists. For one, the jobs that are more likely to be female-dominated -- think education, social work and child care -- also tend to pay less. It’s possible that’s precisely because these jobs are female-dominated. As Hanna Rosin, author of The End of Men: And the Rise of Women, wrote in an August 2012 Slate piece, "Is it that women are choosing lower-paying professions or that our country values women's professions less?"

Women’s careers are also more likely to be interrupted when they have kids, which can derail their job trajectory and earnings growth.

But even when you control for things like education, career and number of hours worked, women still earn about 5 percent less than their male colleagues, according to a 2011 analysis from the Federal Reserve Bank of St. Louis.

That’s likely due in part to subtle forms of bias. When women act assertive or decisive, qualities that are often necessary to succeed in the workplace, they’re judged more harshly than their male colleagues, research shows.