Not only does the gender wage gap have real staying power, but it's alive and kicking in all 50 states.

According to a new report released earlier this week by the American Association of University Women (AAUW), the gender pay gap -- which had significantly narrowed since the 1970s -- has slowly plateaued in recent years.

Compiling data from the Census Bureau, the Department of Education and the Bureau of Labor Statistics, AAUW calculated the median salaries for full-time employment in all 50 states and the District of Columbia. In the U.S., women are paid 23 percent less than men on average. Although down from a 2012 figure of 91 percent, Washington, D.C. maintains the smallest wage gap in the U.S., with women earning 90 percent of what their male counterparts do ($66,754 vs. $60,116). Also consistent with last year's results, Wyoming came in last with women taking home a shocking 64 percent of men's average earnings ($51,932 vs. $33,152).

While it remains important to note that geography and local industry have a large influence on differing salaries, there are other major factors that come into play -- namely education level, race/ethnicity and age.

AAUW analyzed the pay gap by looking at full-time, year-round workers over the age of 15. Beyond comparing salaries of all men to salaries of all women, the report broke down wage imbalances between the sexes along three additional demographics: race/ethnicity, education level and age.

Race/Ethnicity
Asian-American women had the largest gender wage gap while Hispanic or Latina women's earnings were most comparable to their male counterparts. 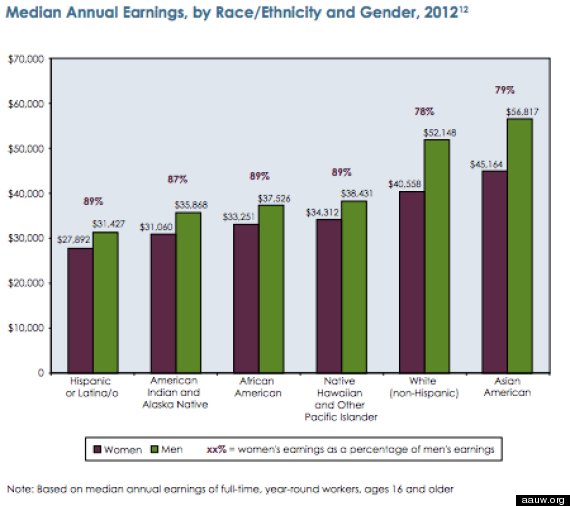 Age
On average, women are paid 90 percent of what men are paid up until the age of 35. From 35 years-old to retirement, women typically earn 75 to 80 percent of what men earn. It's no coincidence that this is the age many women start families, and studies show that working women's upward mobility may take a hit when interrupted by maternity leave. 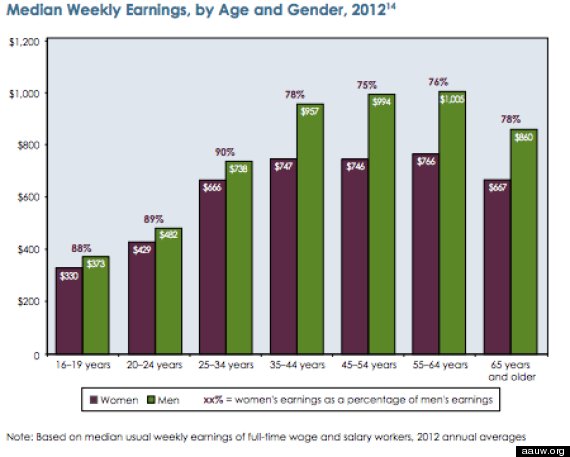 Education
While greater education does increase women's overall earnings, it does not significantly close the gender wage gap. At every academic achievement level, women's median salaries are less than men's by at least 21 percent. 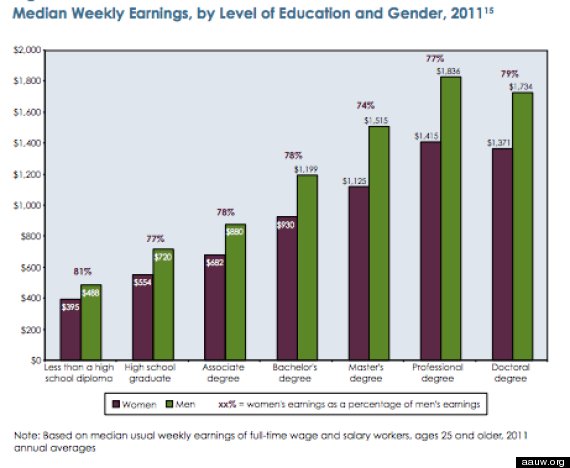 While the pay gap is partially due to factors such as college major and type of job pursued after graduation, there is still a large part that cannot be explained by individual choice. In a 2012 analysis, AAUW found that even after controlling for occupation, industry, hours, work experience, college major, religion, race/ethnicity, GPA, education, number of children and marital status, women are paid only 82 percent of what their male peers are earning just a year after college graduation. Ten years out of college, the gap widens with women earning a mere 69 percent of what men earn.

At this rate, we'll probably send a woman to live on Mars before women earn as much as men do here on earth.