Why does the world hate genealogists? Or, to rephrase, why are the masses of people around the world who are engaged in questions about their family's past often dismissed by those who aren't? When I started writing The Invisible History of the Human Race, a book about what gets passed down, I met many people who were deeply engaged in the very popular hobby, but there was a lot of negativity as well.

"Oh, it's a real American thing," one person observed. Others said it wasn't "real history." Critics with more existential concerns argued that even if you had access to this or that document from someone's past, you could never determine from it what he or she was truly like.

The Guardian columnist Zoe Williams wrote that genealogy "conveys a silent prejudice that never has the guts to announce itself. Ferreting about for antecedents in parish records says, effectively: 'I attach a certain value to having always come from Suffolk or wherever. Oh, no, no, no, I don't mean being foreign is bad; I just mean it's so much nicer not to be.'" Another journalist wrote about explaining to his teen daughter, a genealogy buff, that "nothing in her genealogy defines her."

Really? If a person's genealogy is the series of individuals whose coupling eventually produced that person, then it's hard to see how this is plausible. Surely some part of our identity has come down to us through our parents from our grandparents and from their parents. What we inherited needn't be physical, and it needn't be direct. The way people think about themselves is, to some extent, a reaction to the ideas about identity that were transmitted in their families. If you take genealogy to include all the qualities of the people in your lineage -- not just their biology but also their unique history (their culture, choices, personalities and the significant events they lived through) -- then the influence that these factors had on them, and in turn had on you, is an open and interesting question.

So why would anyone argue that we shouldn't ask it? Is it telling that the consensus against genealogy, against looking back oneself, is an educated one? In fact, if you tap a little on the argument's brittle surface, its origins are revealed. People who dismiss genealogy aren't just afraid that it's about classism or self-indulgence -- they're afraid that it will license the return of one of the worst ideas in the world: eugenics.

In the early 20th century, Paul Popenoe wrote extensively about America's great eugenic future, in which genealogy would play a crucial role as nothing less than the "handmaid of evolution." The traits recorded in a pedigree were not just "personal matters," he argued -- "upon such traits society is built; good or bad, they determine the fate of our society."

In addition to birth and death dates, names and relationships, Popenoe advised that genealogies should include notations of traits, talents and flaws. Americans should send their genealogies to a central office, where researchers could use the material to learn more about heredity and apply their findings to medicine, law, sociology and statistics. "The alliance between eugenics and genealogy is so logical that it can not be put off much longer," he wrote.

Genealogists understood themselves better, experienced broader outlooks and led worthier lives, claimed Popenoe. Society could use genealogies to make decisions about the education of children, who could be directed based on their inborn abilities. Genealogy helped people gain perspective, he wrote, on "the sacred thread of immortality, of which they were for a time custodian." Unfortunately, some threads were more sacred than others, and if the great warp and woof of the human fabric was tattered at its edges, Popenoe advised trimming those edges off. He considered the extermination of dysgenic people.

"Between 1907 and the 1970s, at least 60,000 Americans were judged inadequate and forcibly sterilized by their states."

Ultimately, Popenoe advocated segregation and, as a useful next step for special cases, sterilization. That remedy was taken up by many states, beginning in Indiana in 1907. The first American to be forcibly surgically sterilized was seventeen-year-old Carrie Buck, who was described as belonging to the "shiftless, ignorant and worthless class of anti-social whites in the South." Buck had one child, who had been conceived as a result of rape. Despite this and the fact that her first-grade school report revealed a B average, she was described by the men who decided to sterilize her as promiscuous and feebleminded.

Others subjected to the process included criminals, the blind, the deaf, orphans, the very poor and people who were institutionalized. Between 1907 and the 1970s, at least 60,000 Americans were judged inadequate and forcibly sterilized by their states. The consequences are still playing out. In 2014, residents of North Carolina who had been sterilized by the state between 1929 and 1974 were able to file for reparation from a state fund.

Eugenics was taken up with great enthusiasm in Norway, Austria, Denmark, Finland, Belgium, Russia, France, Mexico, Brazil and Japan. Many nations sought to bureaucratize human breeding and control heredity by establishing federal offices to track genealogy, like the Eugenics Record Office (ERO) in the United States and the Swedish State Institute for Race Biological Investigation. Sterilization policies were implemented throughout the world, and science and eugenics were presented at American state fairs and in other countries as a combination of education and entertainment. Women competed in eugenic beauty contests and attended hygiene exhibitions.

"Genealogical magazines sold well, as did books such as 'How Do I Find My Ancestors: A Guide to Quick Proof of One's Aryan Ancestry.'"

In Germany, the tangled threads of genealogy, heredity and evolution developed along similar lines. Today, people in the West tend to think of the impulses that led to World War II and the Holocaust as quite distinct from the character and preoccupations of people in the rest of the world. In fact, there was much in common on both sides, especially as regards ancestry and its significance. Before World War II, toxic beliefs about kinship, heredity and race hygiene had led to mass sterilization of unwitting or unwilling people all over the world. In Germany, the Nazi regime took the process to its horrifying extreme.

Nazi genealogy was a way to not only bureaucratize the social categories that mattered to anti-Semites; it was an enormous social machine that reinforced, as well as recorded, the racism and eugenic ideals of the Nazis. In Germany, tens of millions of people were caught up in a documentary maelstrom. Germans lined up at registrars and before other government representatives to produce documents establishing their ancestry. "Businesses gave away genealogical tables as marketing devices, much as present-day companies give away pens and calendars," wrote Eric Ehrenreich, author of The Nazi Ancestral Proof: Genealogy, Racial Science, and the Final Solution. Genealogical magazines sold well, as did books like How Do I Find My Ancestors: A Guide to Quick Proof of One's Aryan Ancestry.

It didn't end with the Nazi's either. Even today, in North Korea's songbun system of social organization, party and local administration officers track the ancestry of all citizens. Although they don't share that information with the country's people, who may well have lost personal knowledge of it. A family connection to a dissident -- be it a close relative or a distant ancestor -- may block a person's access to some jobs, education, party membership and even to food.

But the problem with conflating curiosity about the past with evil intent is that such logic could be used to justify destroying such information. Indeed, some regimes have specifically targeted historical and family information for destruction. In 1924, when communists were in power in Mongolia, they destroyed family trees that had been kept for generations and banned indigenous surnames. For more than seventy years, locals simply called one another by their forenames. In 1998, the government decreed that Mongolia's citizens must rediscover and register their surnames and their fathers' names. But by that point, many people no longer remembered them.

In Mao Tse-tung's China, the leader's view of genealogy was initially benign, until he began to feel threatened by the established power of traditional clans. In order to survive the violence of the Red Guard, thousands of families destroyed their jai pu -- documents passed down over many hundreds of years that tracked family.

"Totalitarian power thrives when it alienates people from basic information about themselves."

Totalitarian power thrives when it alienates people from basic information about themselves. When European slavers abducted people from Africa, they essentially took away their history as well. In Canada and Australia in the early to mid-twentieth century, many indigenous children were taken from their communities and raised in settlers' families or group homes. These acts have since been described not just as abduction but as cultural genocide.

There's another problem with dismissing the questions that people quite naturally ask about what is passed down. Big data and DNA are telling us more and more about the past and its dynamic flow -- about what each generation passes on to its replacement. The shuffle and mix of DNA over the generations tells us about not just biological history but social history as well. It's a basic truism that men and women combine their DNA and pass down a unique mix to their children, yet this fact allows us to reconstruct the populations of the past -- their meetings, conquests and migrations.

Words get passed down too, and economists have shown compelling correlations between events from the very distant past and the attitudes of the present. Distrust, it seems, can be passed down in families. Africa today is afflicted by many problems related to under-development, much of which has been attributed to the legacy of the slave trade and also to the colonial period (1885 to 1960). Until recently, no one had attempted to quantify that damage. Economists Nathan Nunn and Leonard Wantchekon compared different economies in modern Africa and found that the countries that lost more people to the slave trade were also the poorest countries today.

How could the slave trade shape economies and affect lives in Africa over a century after it ended? Nunn and Wantchekon discovered that the legacy was passed on not only in the materials and institutions from the past but also in the way people thought about one another.

This is the kind of truth genealogists have been tracking down for years. And it's why it's not okay to just look back -- it's important to do it with all the modern tools we can use, the digitization of documents, the data and the DNA. While it is true that dark currents once flowed through our questions about who we come from, darkness is not integral to the activity. Today, we see the difference, and it frees us to deal with the dark and still ask questions.

This is a modified excerpt from Kenneally's new book, The Invisible History of the Human Race.

PHOTO GALLERY
Science That Changed The World In 2014
Download
Calling all HuffPost superfans!
Sign up for membership to become a founding member and help shape HuffPost's next chapter
Join HuffPost 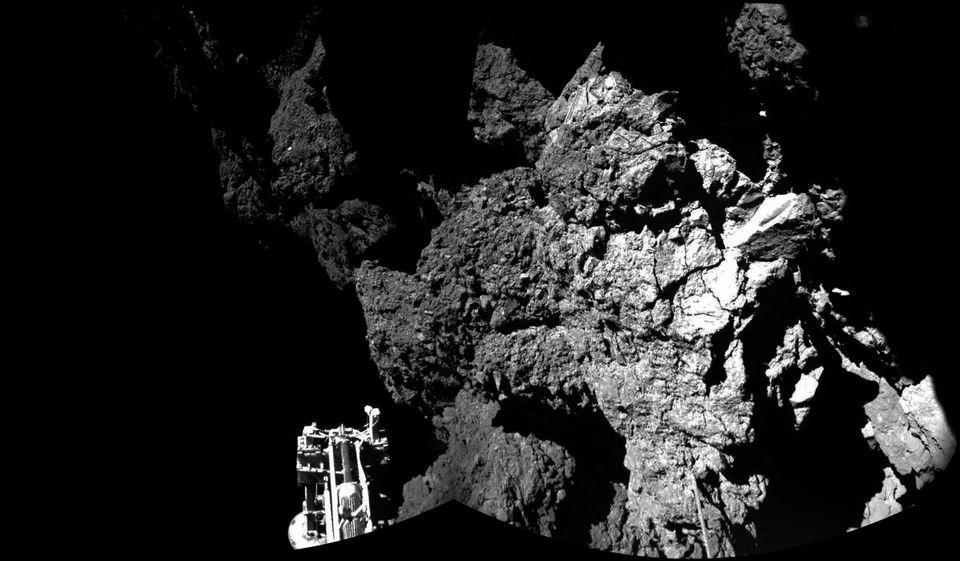