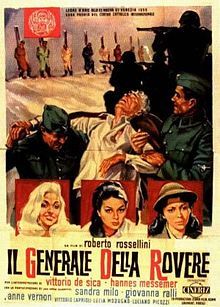 Roberto Rossellini's General Della Rovere (1959), which was recently revived as a part of Vittorio De Sica retrospective, currently playing at Film Forum, is a chance to see the great Italian director (Bicycle Thieves, 1948, The Garden of the Finzi-Continis, 1970), act. The role would be a plum for any thespian due it's marvelous conceit. De Sica plays the part of Vittorio Emanuele Bardone, a fraudster who exploits the misery of occupied Italy and in particular those whose relatives have been imprisoned by the Nazis. Bardone gets caught up short by his fascist counterpart, a savvy S.S. colonel named Muller (Hannes Messemer) who outdoes him at his own game. The mixture of rivalry and admiration that forms the basis of the relationship between Muller and Bardone is reminiscent of that between von Rauffenstein (Eric von Stroheim) and de Boeldieu (Pierre Fresnay) in Jean Renoir's Grand Illusion (l937). General Della Rovere is based on a novel that apparently had some basis in fact, but there's a disconnect. The contrived theatrical quality which sets the stage for De Sica's tour de force is almost at odds with Rossellini's stark neo-realism. It's as if the intrinsic melodrama of the narrative were being mollified by the director's signature style. An unforgettable scene where resistance fighters hover in a snowy piazza recalls the gritty Rossellini masterpiece Rome, Open City (1948). But then there are also the shots of the prison with its futuristic lines of black cell doors complemented by a soaring interior whose Beaux Arts style is as duplicitously high-minded as the film's final con--where Bardone impersonates the title character. Has Bardone finally undergone a conversion and become a hero? You might admire De Sica's acting, but it's hard to believe the figure Rossellini creates has finally seen the light.

{{This was originally posted to The Screaming Pope, Francis Levy's blog of rants an reactants contemporary politics, art and culture}