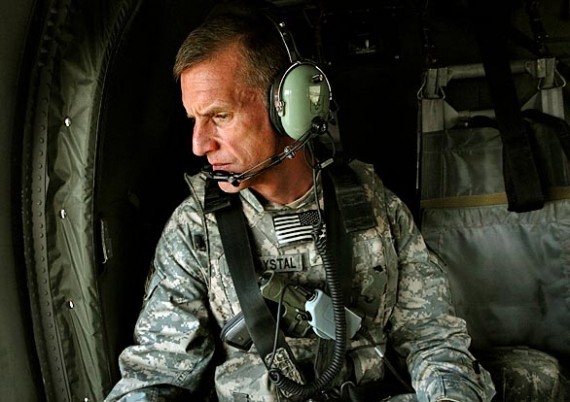 Contrary to the pundits on Fox News who've built a media empire espousing the virtues of patriotism, General Stanley McChrystal today articulated a deeply held conviction in the U.S. military. Responding to whether he would have made the deal that freed Sgt. Bergdahl, the former commander of U.S. Forces in Afghanistan stated, "We don't leave Americans behind. That's unequivocal." He also advised against rushing to judgment by saying, "We're going to have to wait and talk to Sgt. Bergdahl now and get his side of the story ... One of the great things about America is we should not judge until we know the facts." Whereas people like Donald Trump have made grandiose statements like, "Every soldier and every American is at risk now," General McChrystal has brought some much needed clarity to the Bergdahl debate.

Why should we listen to Stanley McChrystal and not people like Trump or Fox's Brian Kilmeade? An aptly titled section on his TED biography, labeled "Why you should listen," highlights the tremendous accomplishments of the Four Star General:

With a remarkable record of achievement, General Stanley McChrystal has been praised for creating a revolution in warfare that fused intelligence and operations. A four-star general, he is the former commander of U.S. and international forces in Afghanistan and the former leader of Joint Special Operations Command (JSOC), which oversees the military's most sensitive forces. McChrystal's leadership of JSOC is credited with the December 2003 capture of Saddam Hussein and the June 2006 location and killing of Abu Musab al-Zarqawi, the leader of al-Qaeda in Iraq. McChrystal, a former Green Beret, is known for his candor.

Unlike the Fox News team, the former Green Baret has helped capture Saddam Hussein and killed al-Qaeda's second in command. Also, unlike all of the people condemning Bergdahl, McChrystal possesses the knowledge of a former Commander in Afghanistan. His words have reminded the country that a cherished value system shouldn't be jettisoned simply because a soldier allegedly deserted his post.

Too often in a country where only 2.5 million men and women defend over 317 million citizens, pundits on radio and television evoke the virtues associated with patriotism only when it suits them. Their recent accusations of Bergdahl's alleged desertion (possibly aiding the enemy, etc.) are particularly troubling, especially since we haven't heard his side of the story. What we do know is what certain fellow soldiers think of him, and their viewpoints cover a wide range of opinions. As for Bergdahl's role in the deaths of soldiers who went to find him, Evan Buetow, a sergeant in his platoon recently shared the following thoughts:

"Those soldiers who died on those missions, they would not have been where they were ... if Bergdahl had never walked away," he said. "At the same time I do believe it is somewhat unfair for people to say, 'It is Bergdahl's fault that these people are dead.' I think that's a little harsh."

Whereas Fox News will pick and chose the statements from soldiers that suit their political ideology, few pundits have quoted Beutow's view that labeling Bergdahl a murderer would be "unfair" and "harsh."

As for what Bergdahl did as a prisoner of the Taliban, the real question to ask is: "Where were you on June 30, 2009, when Bergdahl was reported missing in Afghanistan?" If you were in the military, or you're a veteran, then you have the right to say and view this saga in any manner you wish. You've fought for this country while the rest us, over 317 million Americans, stayed home. But if you've never risked your life for the country and have the audacity to condemn a man who at least was in Afghanistan while you were watching Keeping Up With The Kardashians, take a moment of pause. Relax and get off your high horse long enough to realize that you haven't been in Bergdahl's shoes, so before calling him a traitor, start to question why you never chose to enlist in the military. Then, read the words of Nathan Bradley Bethea, an infantry officer in Afghanistan who recently wrote an article about Bergdahl:

I believe that Bergdahl also deserves sympathy, but he has much to answer for, some of which is far more damning than simply having walked off. Many have suffered because of his actions: his fellow soldiers, their families, his family, the Afghan military, the unaffiliated Afghan civilians in Paktika, and none of this suffering was inevitable. None of it had to happen. Therefore, while I'm pleased that he's safe, I believe there is an explanation due. Reprimanding him might yield horrible press for the Army, making our longest war even less popular than it is today. Retrieving him at least reminds soldiers that we will never abandon them to their fates, right or wrong.

Bethea's viewpoint, like General McChrystal's words, is that even if Bergdahl's actions were less than honorable, he was still an American soldier. Unlike the millions of American's (who would never even think of enlisting but are quick to judge), Bethea states that, "Retrieving him at least reminds soldiers that we will never abandon them to their fates, right or wrong." These words are coming from a veteran who wrote an article discussing the soldiers who lost their lives searching for Bergdahl.

Sgt. Bergdahl might have made a huge mistake while in Aghanistan, but he's not the first American whose misguided actions might have led to the death of soldiers (think about all the pundits who vehemently called for two wars, or the lawmakers who made mistakes that led to the surges). If politicians get a free pass for their failures because of the fog of war, then a soldier who possibly deserted should at least be given the courtesy of defending himself before being convicted of a crime. America is in bad shape when a POW's release is met with more fury than all the failed foreign policy decisions of pundits and lawmakers. Citizens, and especially media pundits, should pay attention Gen McChrystal's words and remember that America does not leave soldiers -- even ones who make mistakes -- in enemy captivity.