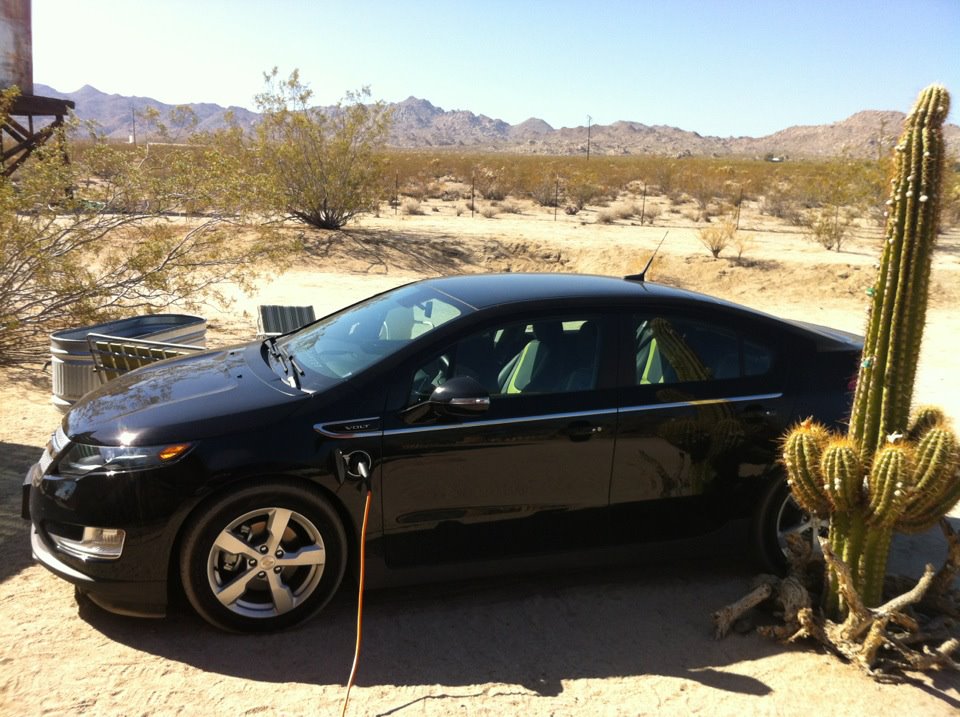 $4.79 a gallon reads the sign at the station. That's it, I've had it! In April, I finally broke down and decided to get a Chevy Volt! I finally sold my beloved Porsche Turbo Cab and am ready for a new ride.That's right folks, time to kiss the pump goodbye. I'm getting a true electric car. This will be great! I didn't really mind when despite the daily television ads for the car, that not a single dealer in Southern California had a Volt in stock. What was even more alarming is that most of the dealers barely knew what the car was. Moreover, they were not at all eager to sell me one. "How about a Chevy Cruz, Sir? We have excellent deals on Camaros. " I heard over and over again. This can't be! I thought. Don't they know this is the car of the future? Chevy and the American people have invested millions in making this thing happen. How is this possible?

But I am a fighter! I called, made threats and finally with the help of their corporate office I located a dealer in the suburbs of Los Angeles that apparently had a single Volt in stock. Well, not exactly, they managed to secure one from a dealer in Illinois and would have it in LA upon my order. Fine. I paid a deposit with a credit card over the phone. I didn't even negotiate. " Green flowery panels on the inside? It's your only one? Fine! I'll take it! Just get me the fregin car in the ad! " I said determined to get my electric super-car of the future.

Showing up at the dealership was interesting. They had the new Camaros and Corvettes all shiny and on pedestals. When I mentioned that I'm there for a Volt they looked at me like I was a flower pushing, granola eating, pyramid worshiping hippie that was there after some alien object. It felt like now they were going to have to get that punished child that had been hiding in the attic for years. After their obligatory push to try to sell me anything but a Volt and my insistence that the Volt was the only GM product I was interested in, they finally caved and reluctantly sold me the car. I have never seen a sadder bunch of car salesmen in my life. My refusal to purchase one of those gas guzzling monstrosities was somehow a personal assault to them. How I resisted the shiny bright orange convertible Camaro perplexed them all.

It's over 6 months later. Gas is near $6 a gallon. The volt is the greatest car I have ever owned. I rarely have to fill it up with gas. It plugs into my home wall outlet. It is perfectly designed with very few flaws. It drives great. It has tons of cargo space. It hasn't broken down once since I got it and is virtually maintenance free. I'm in automobile heaven.

It has occurred to me that GM may not be interested in selling Volts. It seems clear to me that what they portend and what they do are two very different things. There is a clear disparity between the butt kicking, gas guzzling muscle car "Chevy" that we know and the green, technologically-advanced and intelligent "Volt" that is clearly the future for America.

The two personas and so far apart that no one can believe it when Chevy says "Hey, we care about the environment and want to reduce America's oil dependence" while there is a 10 mpg muscle car in the background. We just don't believe it anymore. With that said after over a decade of disastrous design and shamefully bad products, the Volt is truly excellent! It is a truly a marvel of modern technology. Every car should live up to this standard both in quality and fuel economy. The Volt is what every modern car should aspire to be. It is as close to perfect as I have seen a car be.

GM can't fail because we can't let it. The Volt is too good. If GM keeps punishing the Volt and sticking it in the proverbial attic it will fail. Not because it's not a great car or an answer to high gas prices but because they have other "more profitable" cars in the long term for them to sell you and their infrastructure will lead to selling the gas cars over the electric ones every day of the week.

In my opinion, a clear separation between the Volt brand and the Chevy brand is required. GM needs to make Volt its own company and with its own dealerships. The Volt is not just a car. It may be the revival of the "Great American Car" and the rebuilding of Detroit as a great American city. It can mean millions of more jobs here in the U.S. For this to happen, in my opinion the Volt can't be dependent on GM in any way. I want to see one in every color on a new exclusive and futuristic Volt lot and a smiling salesman that is eager to take my money and to "even throw in some floor mats" if I buy today. Until then,especially after election season goes away and fuel prices go down a bit we may see a slow and gradual cancellation of the Volt product. The cars will surely disappear into the past. The echo of the future may sadly end up being heard from the back of a Camaro or Chevy truck " Remember the Volt? It was awesome. Whatever happened to that? "