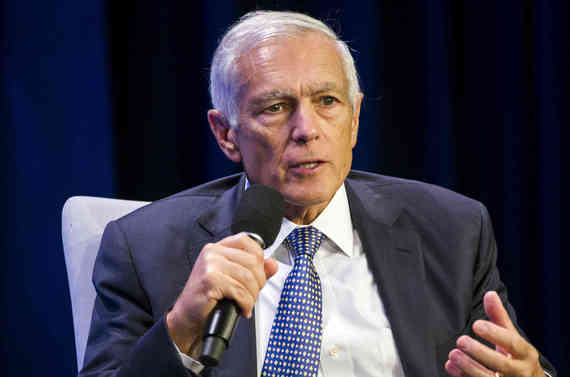 Retired US Army General Wesley Clark, former NATO Supreme Allied Commander, Europe, has campaigned since 2014 to convince Western governments to provide lethal aid to Ukraine to fend off Russia's occupation of 9 percent of its territory.

In a wide-ranging interview, he talked about why this hasn't happened and about Russian President Vladimir Putin's war against Ukraine and Europe, his Syrian strategy, and his overall game plan. "We should have given defensive lethal weapons to Ukraine," he said. "If we'd given them defensive weapons, many lives could have been saved. There are major human consequences here."

Overall casualties now mount to 9,100--up from 6,200 in spring 2015--according to a United Nations report issued December 9. Russia denies direct military involvement but no one believes that. Moscow claims separatists are in charge, but NATO, Clark, and the UN have evidence to the contrary. Russia's involvement is direct and murderous.

As matters stand, Clark said, Russia could invade Ukraine with a few brigades, but it won't for two reasons. The current strategy of harassment and destabilization serves Putin's overall purpose, and, second, by not overtly using military troops Putin believes he can get the Europeans to ease sanctions.

"Ukraine is a work in progress by Putin. He has multiple channels to attack Ukraine, economically, politically, diplomatically, militarily," he said. "He wants to get sanctions lifted, so he's not deepening his [overt] military activities into Ukraine. But every day there are shooting incidents."

"He has a big game plan and that is to break up the European Union, a weakened NATO, restore Russia's defensive area [Warsaw Pact] and control Ukraine and Belarus," he said. "He's doing this through covert ops, sabotage in Ukraine, military aggression, the separatist movements, economics, diplomacy, buying people in the EU, and putting FSB money toward environmental groups to protest against fracking to keep Europe dependent on Russian oil and gas."

For instance, Putin friend, former German Chancellor Gerhard Schroeder, has gotten wealthy working for Gazprom, the Russian state gas company. He's not alone. Many other prominent politicians in Germany and throughout Europe have similarly been co-opted. "Russia uses money to buy influence," he said. "Russian business deals involve I'll do this and you do that. Putin is working a web of influence."

Clearly, Europe has been compromised. Europe had to be dragged into sanctions and Germany and France bungled things by largely accepting Russia's terms concerning a ceasefire agreement, then allowing Moscow to flout the agreement without major consequences. "The United States has done its best to empower its allies to get involved," commented the General.

Why hasn't the United States gotten more involved, given that Putin with his arsenal of nuclear weapons is perhaps more dangerous than ISIS?

"Our government is worried but not solely focused on Europe," he said. "The administration has multiple foreign policy objectives. It has responsibility not just to the overall strategy, but also to American public opinion. Foreign policy reflects domestic politics. The President decided it was important to get Iran to sign the deal and he needed Putin for that."

"The President knows what Putin is all about but he was right to get the Iranian deal," he said.

Putin's pivot into Syria to help Syrian President Bashar al-Assad is another tactic, quite separate, to meet his overall objectives.

"If there's a way to use Putin to control Assad fine. There is no solution to ISIS without a political solution. Sunnis from Saudi Arabia and Turkey must accept some role for Iran (a Shia nation). Iran has got to accept it cannot control all of Syria," he said.

Sunnis and Shias must unite to start fighting ISIS, he suggested.

Was Ukraine put on a policy back burner because of ISIS?

"You must keep these two things [Syria and Ukraine] separate," he said. "Ukraine must have the ability to defend itself and a political process must take place to destroy ISIS. Neither Ukraine nor the United States can give in on the legal status of Crimea, as part of Ukraine. I was happy to see Vice President Joe Biden repeat that. We've got to support Ukraine. But the administration must work both to support Ukraine and to lead the coalition to destroy ISIS."

Should the fact that Turkey, a NATO member, shot down a Russia military jet without military retaliation, embolden the West to properly arm and encourage Ukraine to push Russia out of its territory? "Turkey gave multiple warnings to Russia about its jets. It was a test by Putin. He shoved and wanted to see how much gumption Turkey had," said the General. He found out that the Turks would stand up to him.

It's time for the West to do the same.