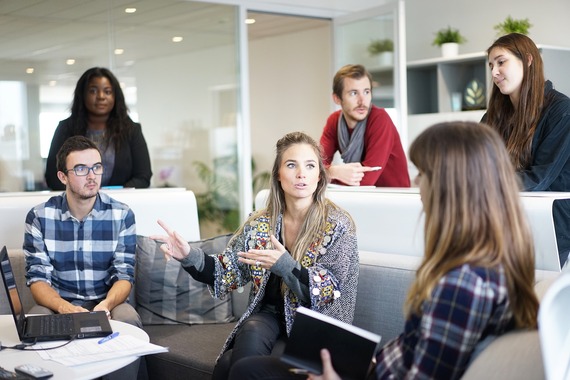 Back in the day, when I had big plans of becoming a writer in the film industry, a friend already writing in LA gave me a piece of insight that always stuck with me --

"In this industry, you'll either have to forego creativity to make money, or you'll fight to keep your creative freedom..to make no money."

This claim was a real awakening for my planned career path and, most importantly, the development of my side hustles. And I am not alone.

"The hustle" isn't just a name of a song. The millennial generation is hustling. In part to stay within reach of their creativity, to keep hold of that response you gave to "what you want to be when you grow up" while simultaneously still managing to be an adult able to pay their bills on time through their full time, real paying job.

Thus, rather than being defined as the over-privileged millennial generation, I believe the more valid description is this - We are Generation 1099. The term that perfectly describes the generation that no one else can seem to wrap their heads around. While maintaining the full-time status quo, we have found a way to also maintain that part-time drive. Most people assume the side hustle is purely financially motivated. After all, research has proven that more millennials are living at home than in any other living arrangement. With 32.1% of millennials living with their parents, it is the first time that the age bracket (ages 18 to 34, as defined by the Pew Research Center) have lived with their parents in all of American history.

While the research is true, millennials aren't living at home solely because they can't afford not to. Rather, if they're able to save the money, why not? The need to be financially stable is not the sole rationale behind the side hustle, at least not for everyone.

Overall, the side hustle offers something worth more than money. The side hustle represents the hobbies and activities you did for free when you were still in school, simply because it was something you craved. It's a type of defense millennials have established for themselves against feeling claustrophobic, stuck, and bored in a rudimentary 9-5 corporate lifestyle. This psychological benefit is the real rationale behind Generation 1099.

You might say, "That's the problem with millennials. They've barely scratched the surface of their careers and they're already claiming to feel stuck and bored? They're never satisfied."
Correct, we're hardly ever satisfied. In part, because we were brought up to believe that "you can be whatever you want to be" paired with the fact that employment is harder for workers between the ages of 25 and 34 than it is for any other age bracket. Add that to the initial claim of "losing creativity to make money, or losing money to be creative," and that's where you find Generation 1099 and the need for the side hustle.

The generation that refuses to give in to the corporate structure that prior generations built and mandated we follow. In reality, it's the fault of these past generations that we've been forced to side hustle to begin with. We had no part in the financial crisis, the creation of Corporate America, or the high unemployment rates. Rather than claiming us to be a "me, me, me generation," we should be looked up to for still having the motivation to bring that side hustle home day after day.

Based on my friend's jarring insight, I pivot my dream of being a writer in the film industry, into a side hustle of being a writer to feed my creativity. For me, writing continues to be my outlet, rather than something I depended on to pay the bills - something I assumed I'd eventually learn to resent. While I don't live with my parents (anymore) writing is now my side hustle. My entry into the land of 1099.

To be fair, we treated ourselves as 1099's before we were even old enough to know what 1099 was, largely in part to the evolution of the Internet. The Internet gave millennials the opportunity to truly become whatever they wanted to be, and sometimes all it took was a Google search to find someone to pay them (albeit a minimal amount) to do what they loved.

Sorry parents, while we may still be taking over your home, "a secure career" is not the goal for Generation 1099. We're determined to have it all and, for now, we'll have the side hustle. It may not be what pays the bills, but it's what gets us out of the bed in the morning. And until we figure out how to have creative freedom and get properly compensated for it, we're forced to utilize your Wi-Fi and our free time in order to have it all.