Americans has been obsessed with success since the country's earliest days. Americans have also historically associated success with taking chances and overcoming risk -- and indeed risk-taking became recognized as part of the national culture. But America is no longer a Wild West, and we're looking for some order in making it here against all odds. The holiday season is traditionally a good time for reflecting, both as individuals and collectively as society. With that in mind, let's take a look at some factors that have been helpers, or hinders, in our drive to success.

Writing a book about top achievers of Generation FF (the first generation of female immigrants) gave me some ideas to share, with the New Year's resolution -- of how to further our success -- to recommend.

First, it's important to understand that challenges that reduce our chances/odds of success today get amplified by several factors: slowing upward mobility; a deepening income gap leading to lack of investment; the glass ceiling and daily chores (for many women); and a bias/stigma against those who "don't look like me," i.e., minorities and immigrants. Second, while all American success-seekers need to crack the success code, or learn the socioeconomic rules of the game, the immigrants need to additionally crack the immigration code, or integrate culturally.

We need to keep these dynamics in mind when designing our path to success or studying the success of others. The above cumulative challenges are tough, but there are many American women who face even more trials -- enough to kill a samurai.

Generation FF is diverse in biological age, but unified in having a double -- bicultural -- work-life perspective, an enormous advantage and disadvantage at the same time. Of all American generations, they have the most odds lined up against them, because:

1. Among those in power, they face an ever-present glass ceiling

2. Among some U.S.-born people, they face a stigma and suspicion for outsiders

3. Among immigrants at large, many women have the added expectations of motherhood plus traditional home-making responsibilities

4. Although the U.S. is allegedly the most self-promoting nation in the world, there's still much talk about women's "gap of confidence", as compared to men. Against this background, Generation FF is at the lowest of the low on a confidence scale.

So, it's unsurprising that big achievers are far and few between Generation FF as a new demographic constituency (now 51.4 percent of all immigrants and over 12 percent of the American female population). Their potential, however, is huge: 11.6 percent of immigrants hold a master's, professional, or doctorate degree vs. 10.8 percent of native-born U.S. residents, and immigrant women are more likely to start their own businesses than those born in the U.S. (9 percent to 6.5 percent, respectively). With all this potential, multicultural women need more role models to infuse them with the American success mentality. I've interviewed one who naturally stands out.


The social entrepreneur and CEO of Jersey City-based nonprofit Rising Tide Capital, Alfa's living the American Dream and helping others do the same. She empowers entrepreneurs to start their businesses -- making it her business to help them succeed. She was named one of the 5 Most Powerful Women Changing the World with Philanthropy by Forbes magazine and recognized as a CNN Hero in 2009, all for good reasons.

Since 2004, her organization is educating entrepreneurs through its 12-week Community Business Academy and on-going intensive Business Acceleration Services program. Coupled with a year-round coaching and mentorship, this program equips marginalized entrepreneurs from poor areas with the ability to better operate their small businesses. To date, they have assisted more than 1,000 small and micro business owners, focusing on women, minorities, and immigrants -- thus building the economic potential of the communities from the ground up. 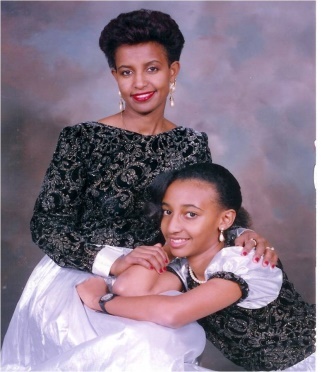 This success went a long way in the making. When Alfa turned 2, her mother had to flee Ethiopia to escape the ravages of the Red Terror -- and worked hard for nine years to bring Alfa to America (pictured). The initial culture shock and integration travails didn't deter the talented teenager from aspiring to higher things. Today, sporting a Harvard degree, a novel-approach company and national-international recognition under her belt, Alfa is certainly not your average immigrant. She represents those Generation FF leaders who are outliers and worthy models for many.

Remarkable for her pursuit of fairness for all, critical thinking and idea-to-implementation track-record, Alfa has beaten all odds to achieve American success (picture 2). 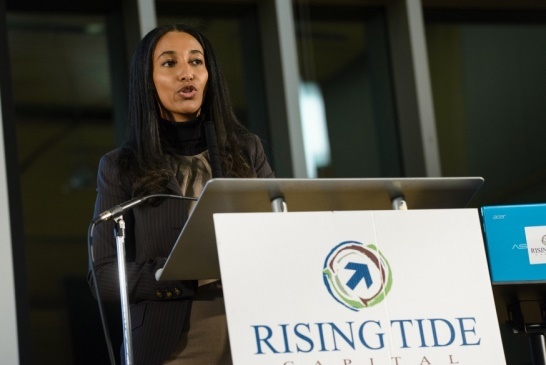 Alfa's contributions to America's well-being go way beyond her personal accomplishments or the reach of her non-profit. Why? Because, if taken to masses, the tried-and-tested Rising Tide Capital approach can initiate the sweeping changes in the U.S. economy. Now more than ever, America needs to sustain hopes of a faster growth for its economic grassroots organizations -- as they can feed the economy at large.

It took an immigrant with her fresh, creative thinking, enhanced by the Ivy-League education, to lay down the foundation of a sure-fire approach/methodology to nourish our economy's roots: lending-plus-training-plus-coaching. And while the worldwide inequality is definitely becoming more and more entrenched, we cannot just watch it happen. Morality aside, letting the poor people sink would pose a systemic risk to the U.S. market economy, our holy cow -- which calls for balanced bipartisan deeds, not words.

So, here's the bottom line: a Generation FF woman discovered the right way to give the American economy a boost. This method is now out there, for all those who seek success for themselves and the country: for the majorities, minorities, immigrants and Americans-to-be. Please make it a New Year's resolution to sponsor this approach -- or do it hands-on -- and let the odds be in your favor!