One of my nieces, a precocious, bright, and interesting teenager visited recently. In the course of conversation at dinner one night, I made a joke using a quote from a Michael Jackson tune, and I was surprised that she got the joke and knew the reference. She then said how much she loves Michael Jackson, which surprised me even more. When she was born in 1997, Jackson was already long past his prime, and into the "better living through chemistry and surgery" phase of pop stardom. Then I did the math and got even more confused.

Jackson's greatest success came after the Jackson Five era, beginning with his solo album Off the Wall (1979) and reaching its high point with Thriller (1982), and the also very successful Bad (1987). He's been a pop culture icon ever since, and deservedly so. If we use the median year (1984) of these three albums as representing his year of greatest popularity, it means my niece has deep knowledge of a pop star whose height of popularity occurred more than a decade before she was born.

I find that odd. When I was 13, I may have had some knowledge of pop stars from a quarter century earlier, but I certainly didn't like any of their music. I was listening to pop music of the time -- Elton John, Led Zeppelin, Hall and Oates, but mostly others in the progressive rock genre like Genesis, Pink Floyd, Emerson, Lake, and Palmer, and King Crimson. My friends and I simply didn't listen to the pop music of the decade before we were born, much less that of two decades prior.

My niece isn't anomalous in this regard. Since the mid-1990s or so, I've noticed similar trends with many college and high school students at institutions in different states and countries, and I've heard similar comments from colleagues around the country. This week, my nine-year old daughter asked, "Who plays the harmonica solo on Elton John's 'I Guess That's Why They Call It The Blues?'" How does she even know who Elton John is (he hasn't had a hit for decades)? She sings along with groups like Heart, Eurythmics, George Michael, Tears for Fears, and others from the '80s hit parade but she also likes Adele, Lady Gaga, and a few other modern pop acts (she hears all of them on the same radio stations, which is curious in and of itself). But how different are those artists from their predecessors? Well, they're different, but the differences are not like those between, for example, Bix Beiderbecke and Herb Alpert, or Ella Fitzgerald and Janis Joplin. (In contrast, the stylistic similarities between Lady Gaga and Madonna are fairly obvious, and have been discussed at length.) There's nothing inherently wrong with artists whose roots are showing, it's just odd because it's impossible to find a pop star from the '60s, '70s, or '80s who sounds and acts so much like a pop star from the '30s, '40s, or '50s (nostalgia or retro groups notwithstanding).

The converse is also true. Older adults are also listening to Lady Gaga. At the 2012 Jazz Education Network Conference, during the Q&A in one of many presentations on building jazz audiences, someone made a disparaging remark about Lady Gaga being "just entertainment," rather than "serious art." This met with loud disapproval from the mostly middle-aged (and older) jazz people in attendance. One man seated a few rows ahead of me responded with a repeated one-word utterance while shaking his head angrily: "Disagree. DIS-A-GREE!!" And I have to admit that I'm part of this phenomenon -- here are the last three concerts I attended: jazz trumpeter Nicholas Payton (I walked out), the Jupiter String Quartet (outstanding concert, one that I will not soon forget), and the german industrial metal band Rammstein (an overwhelming experience, one that I will also not soon forget).

What is going on here? Why are teenagers listening to music that their parents were dancing to 25 years ago instead of rebelling against it? Was the music back then better than today's pop music? This trend is also noticeable in film, where it seems that soon every TV show, cartoon, and comic book from the '60s, '70s, and '80s has been (or will be) made into a feature film (usually a poor film at that).

It seems as if popular music has achieved some kind of unholy inter-generational equilibrium that is, as far as I can tell, unprecedented. In any case, it is highly disconcerting to me. I would understand if the object of affection was Beethoven or Miles Davis or the Beatles (timeless music outside of the brief pop culture time-span), but that is not the case -- it's Michael Jackson, singing "beat it" or "the kid is not my son." (Both are excellent pop/dance tunes to be sure, but the contrived macho gangland chest thumping and a paternity suit sob story are not likely to wear as well in the decades and centuries to come as, say, Beethoven's 9th Symphony, Miles Davis' Kind of Blue, or the Beatles' Abbey Road.)

Was Francis Fukuyama right about the "end of history" but wrong about which history it was? I fear that might be case, but I hope I'm wrong. 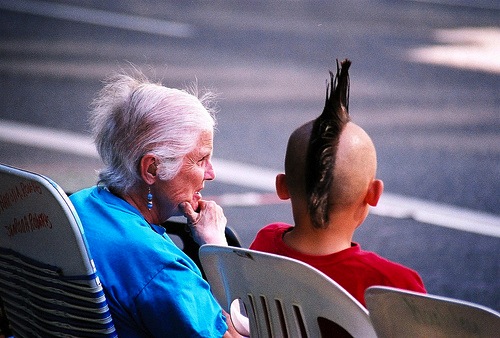