Earlier today, I was wondering what mattered most in terms of rates of volunteerism in America: having spare time or spare money. I would have thought that time was the critical factor. Turns out I was wrong. A look at the data shows an inverse relationship between unemployment rates and volunteerism. You can read about that in my other post "Volunteering and Employment: the surprising inverse relationship."

I also got to wondering this morning if these changing rates of volunteerism look different for different age cohorts, given that a stinky economy affects each differently. So I grabbed some more data and played around with it using MetricMash. As expected, the rates of volunteerism among retired people are stunningly stable over the past decade. But if we look at who is volunteering less among the working-age population, the picture is really quite interesting. 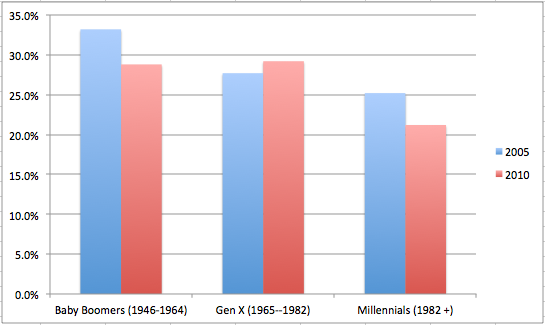 It seems that the Millennials are hit hardest by rising unemployment rates - they have the least experience. It seems the Boomers are also getting it a bit rough as some are induced to an early retirement - they cost the most to keep employed. But the Gen-Xers seem to be losing their jobs at a slightly slower rate than these - again, in the prime of their working years.