A 100-pill package of CVS-brand aspirin costs $1.14 on the company's website, while pharmaceutical giant Bayer's version sells for $6.99.

Yet time and time again, the typical shopper chooses the pricier brand-name drug, even though it's essentially the same, according to a recent study by Dutch economist Bart J. Bronnenberg and three University of Chicago professors.

The researchers, whose findings were published this month by the National Bureau of Economic Research, estimated American consumers are spending an extra $44 billion a year on brand-name drugs, health care items and pantry goods that are no more effective than cheaper, generic equivalents.

Not everyone gets duped, though. Nurses, pharmacists and other shoppers who know that generic drugs and brand-name equivalents have nearly identical formulas more often bought generic aspirin over Bayer, acetaminophen over Tylenol, and ibuprofen over Advil or Motrin. The researchers found similar results for other health care products, such as cold remedies, adhesive bandages, vitamins and contact lenses.

The researchers reached the conclusion that informed consumers are more likely to buy a generic product after analyzing Nielsen data from more than 77 million shopping trips by 124,114 households. They also conducted two surveys with more than 160,000 individuals.

They then grouped those surveyed by profession and income bracket and compared each occupational group by the percentage of generic drugs they purchased.

In the chart below, released in June with a preliminary version of the study, health care professionals are labeled red. As you can see, people who know things more often buy generics, so why don't you? 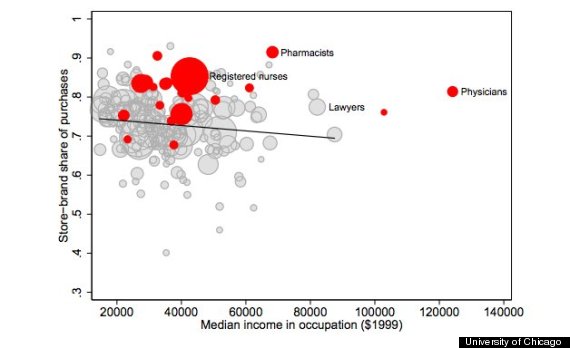 “The pharmacists are about 90 percent more likely to buy generics,” Jean-Pierre Dubé, one of the University of Chicago professors who conducted the study, told The Huffington Post. “If you take somebody with similar income, they’re 30 percent less likely to get the store brand.”

But regardless of occupation, survey respondents who knew all the active ingredients in a medication were 19 percent more likely to buy generic pills than a shopper who could not name one ingredient.

The U.S. Food and Drug Administration has strict rules for both over-the-counter and prescription generic drugs. The manufacturing and effects of generics must basically be identical to their brand-name equivalents, which is why about half of generic drugs are actually made by the companies selling brand-name versions in different packaging.

In a second case study to test their findings, researchers discovered that professional chefs spent 20 percent more of their purchases on store-branded pantry staples such as salt and sugar than non-chefs in similar income brackets.