Multnomah County Animal Services (MCAS) would like to extend its sincerest gratitude to 88-year-old Bessie Elliott. In July, after noticing many of the same pets, still needing homes on the Multnomah County Adoptable Pets page, Elliott decided to action. 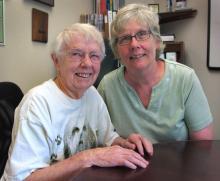 "She reached out to us," said Interim Shelter Director Ann Potter. "And she had this great idea and helped pay for as many animals as she could."

Elliott and her daughter, Linda Elliott-Iverson presented a check to MCAS in mid-July, which paid for the adoption fees and food supplements for some of the shelter's longest-term residents. Fifteen dogs and 19 cats' adoption fees were paid for in advance. Today, the only two pets remaining are the cats Charlie and Koda.

Elliott is one of many faithful fans whose support has helped local animals. As Portland's only open door shelter accepting all animals, Multnomah County Animal Services accepts all lost, stray, abandoned and abused animals throughout the county. The shelter does not pick and choose based on age, breed, health or behavior and 100% of the animals are local. MCAS cares for some of our community's neediest and most challenging animals. Thanks to the often unexpected generosity and support from community members like Elliott, MCAS is able to maintain one of the highest live release rates in the nation.

Elliott has made donations since 2012.

"She often writes their (pets) names down to see who gets adopted, who's gone and who's got a new home," said Linda Elliott-Iverson.

"I have two cats and a dog, who died last year," said Elliott. "I love animals and I feel sorry for them when they don't have a home. I'd like to see them get all adopted," said Bessie Elliott.