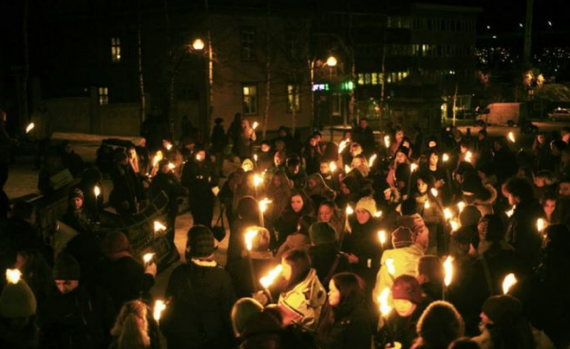 Today, on the 25th of January, thousands of people in Sweden and other countries around the world will light their torches and walk the streets of European cities to remind the world of the genocide that happened in the shadow of World War I. An attempt to wipe out our nation, which has not stopped till todays date.

Every time I leave Turkey, I get a knot in my stomach. It was here that I was born and maybe where I should have been raised. I have many friends here; I love the food, the music, the language and the culture. But my parents didn't want their children to live in a country where we would be treated like second-class citizens; therefore they took us to Europe when I was a little child. As I reminisce, I fall asleep on the floor of Istanbul's airport.

A stewardess that didn't want me to miss my flight woke me up. She asked where I was from. "Sweden", I spontaneously answered. "But you don't look like a Swiss?" I responded that I'm Swedish, not Swiss, and that there is a difference. She looked ashamed. I felt bad, so I told her that I was born in Midyat in Southeast Turkey. "Well, why don't you speak better Turkish then?" she reacted.

I'm Assyrian, a nation that is also called Syriac or Chaldean, and I speak my mother tongue at home, also most of the people where I was born nowadays speak either Kurdish or Arabic. She raised her eyebrows. "I don't understand, are you a Kurd? Or an Arab?"

This was on the January 3. The same morning, Turkish newspaper published reports that Turkey would allow a church to be built in the country for the first time in more then one hundred years.

Meanwhile, it has been exactly one hundred years since the decision was made to annihilate my nation. "Not a stone over the other" was said, so to destroy everything that came in their way, including churches, in the Jihad (Islamic war) against non-Muslims of that time. Another slogan was "no heads should remain on bodies."

It's been 15 years since I produced my first documentary film, A Cry Unheard; it was about "Seyfo," the word for sword in Assyrian, which the genocide of 1915 is called. We interviewed about 30 survivors. Many of them died shortly after that, two of them told us that they felt relieved, now they could leave this life. Now, when they were nearly one hundred years old, they had the chance to give their testimonies. At last, someone was ready to listen to and document what they had experienced.

Over two million Armenians, Assyrians/Chaldeans/Syriacs, Pontic Greeks and Yazidis were slaughtered. Those who survived were deported.

"Stupid media in the west, Turkey has succeeded with another PR-coupe worth millions of dollars. Of course they come up with a bluff like allowing a church to be built, everything to steal attention from the hundred years memory of Seyfo. The press ran the Turkish government's errands, continuously or not. They gave it free advertisings by publishing the news about the church, but we who fight for recognition of the genocide will probably not be given one written line," said an upset friend while we were having breakfast in Taksim in central Istanbul.

Turkish intellectuals, like author and Nobel Prize winner, Orhan Pamuk, have shown great courage and mentioned the genocide and asked Turkey for recognition. Some Kurdish tribes were also involved in the massacres and many Kurds, like the prominent politician, Osman Baydemir, have publicly asked for forgiveness for the atrocities committed by their ancestors. But Turkey, the government, still goes on with it's revision of history.

Another friend, a Kurdish freedom fighter, who also was with us at breakfast that morning, linked Seyfo with the ethno religious cleansing that has been going on in Iraq the last decade.

"It's important not to forget that Turkey is involved in today's Jihad, Islamic terrorist's genocide against non-Muslims like Assyrians and Yazidis in Iraq. Turkey has been a transit land for many of those thugs that are fighting for Islamic State in Iraq and Syria, there is even evidence that the Turkish secret service has helped them with equipment. The same awful mentality as in 1915."

My Kurdish friend also reminded me about IS trying to take over Kobane, a city in northern Syria.

"Islamic State, the brutal terrorists, also kills moderate Muslims like Kurds, for example in Syria, and Turkey is involved in that, too. When Kobane was attacked by IS we begged the Turkish government to help us stop massacres of the city's Kurdish inhabitants, but the Turkish president, Erdogan, refused to help. Hundreds of thousand of Kurds demonstrated their disappointment in southeast Turkey, more than ten people were killed in the clashes between the Turkish police and the Kurdish demonstrators."

Every time a Turk tells me they have not heard of Assyrians it feels like a punch in my stomach, like if the perpetrators succeeded with Sefyo, at least with some of it. Part of the plan was to wipe us out of the history books so that people would never know about our existence.

But we will also succeed. That's a promise to my grandmother, Meyyo, who was found alive in a well, together with the lifeless bodies of her family member who were murdered. And to you my great-grandfather, Sha'e: I bow my head, you saved hundreds of people and gave your life for strangers.

Today, I light my torch so that one day history books will tell your stories and no one in Turkey will say they have not heard of my people.