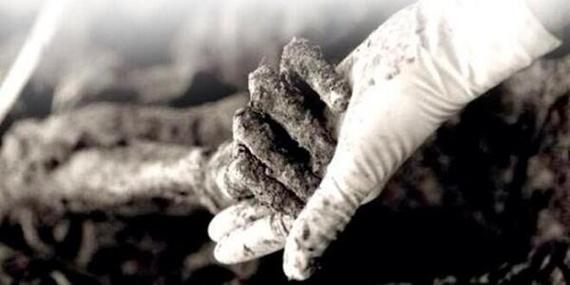 "Syria's future is in the hands of those who must demand the rule of law and accountability for mass graves still consuming today's innocents." (Official photo of Tomasica mass graves)

The U.S. government has issued a statement accusing ISIS of genocide, which coincides with the guilty verdict for the leader of another "Joint Criminal Enterprise" by an international tribunal, (ICTY). If the judgment of Radovan Karadzic, "President of Republika Srpska," will have precedent, then the urgent question is not about the culpability of an individual but to what degree such has effect on the consequences of the crime for which convicted, the remedies available to victims, and indeed the very capacity of the Joint Criminal Enterprise to survive and perpetuate beyond the assignment of guilt for its leader(s). ISIS has similarly been defined as a Joint Criminal Enterprise and beyond the promise of punishment of its leader(s), what are the consequences now in confronting the criminal deeds and what measures will be undertaken to remedy the ethnic cleansing of Christian, Yazidi, Shia Muslim, Turkmen and other minorities who have been targeted and/or resisted ISIS's reign of terror in Iraq and Syria? The "Genocide Convention," to which the U.S. is party, carries with it the affirmative obligation to confront the crime while still ongoing and not just to punish the perpetrators after the fact. Without remedying the consequences of the crime, can we conclude that the rule of law has prevailed or justice served, particularly if the Joint Criminal Enterprise, (JCE), survives or perhaps is even given legitimacy?

Obligation to Actively Confront Genocide, Particularly the Veto 5 on Security Council and WITHOUT EQUIVOCATION:

During the genocide committed against Bosniaks -- Bosnian Muslims -- over two decades earlier, the UN Security Council obfuscated and delayed in order to deflect its obligations and avoid action, particularly those who are vested with privilege and responsibilities of being veto-wielding UN Security Council members. Instead of simply employing the term "genocide" to describe the plan and deeds of the perpetrators, the veto powers imposed semantics as "acts of genocide" or "ethnic cleansing" thus implicitly drawing a distinction and presumably relieving themselves of the obligation to confront.

Washington was perhaps more sympathetic toward the Bosnian Muslim, Bosnian Croat (Catholic) and "the other" victims but unfortunately still evasive in directly confronting the crimes. Those accused of genocide, crimes against humanity and other war crimes as General Ratko Mladic, Serbia's despot Slobodan Milosevic, as well as the now convicted "President" of the self-proclaimed Republika Srpska continued to be characterized as negotiating partners. This resulted in a flawed Dayton Accords which still reflects the fruits, divisions and spirit of genocide. Worse, it arguably encouraged perpetrators to commit the Srebrenica genocide, years into the conflict after women, men and children were systematically murdered in the first few months from multiple ethnically diverse cities as Foca and Prijedor. Those responsible for the ethnic cleansing have perpetuated a scheme of ethnic/religious delineations including renaming ethnically cleansed towns and denying the crimes. Most recently, the current "President" of Republika Srpska, (now a legitimized entity within Bosnia and Herzegovina), dedicated a student dormitory to be named "Radovan Karadzic" even as the international tribunal was convicting the first "President" of RS for genocide, ethnic cleansing and other crimes against humanity. What lessons are to be drawn by would-be despots and bosses of other JCE's as well as future students housed in the "Radovan Karadzic Dormitory"? 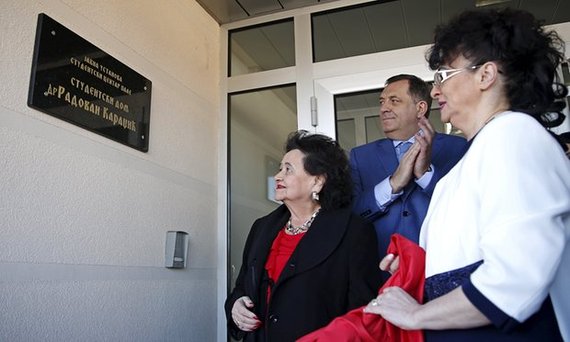 Putin's Moscow has aligned itself with Republika Srpska, in spirit and deed. Mercenaries from the war 20 years earlier have joined Putin's war in Ukraine and the annexation of Crimea. The conflict, more accurately the ethnic cleansing, have been employed as inspiration and model for its own adventurism. From the self-proclaimed ISIS Caliphate leader al-Baghdadi to lesser recognized JCE bosses to Vladimir Putin, wrapping oneself in religious and/or nationalist rhetoric has become the avenue for legitimizing the JCE and rationalizing its crimes by theology, ideology, fear and/or warped morality. The failures of some previous government and even bigotry of some its political leaders has fed the counter narrative of the inevitability of religious and ethnic conflict. (See: "Dayton Accords Defined the Past not the Future?") ISIS employs the Bosnia genocide to attract disaffected and isolated Muslim recruits from western democracies. As with other JCE's, revenge and strict obedience are espoused as pillars of its shrine. 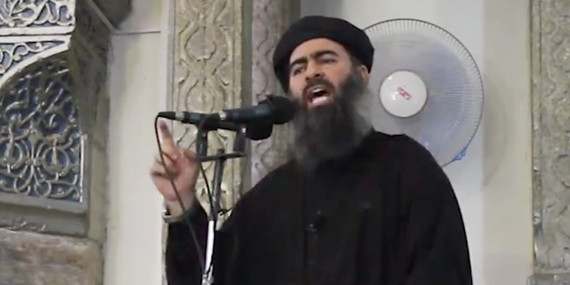 The new Europe is no longer defined by its original inspiration, indeed necessity: to minimize borders between states and peoples as means to douse the embers of centuries old rivalries and conflicts. Ethnicity and religion are employed as foundation for an ever more divided Europe by aspiring populist bosses seeking political legitimacy, whether Ukraine or western Europe, (See: "Construction According to Putin's Model,") or perhaps even in the US.

"Never Again" as Commitment to Act and not Mere Rhetoric?

As then agent of Bosnia and Herzegovina before the International Court of Justice in its genocide case versus Milosevic and the government in Belgrade, I have personal responsibility to seek justice for Bosnian victims but also press the international community to act in any ongoing grave violations of international humanitarian law, whether Ogaden, Ukraine, Myanmar and Syria/Iraq. The Genocide Convention was adopted in the aftermath of the Holocaust and other grave crimes committed during WWII. BiH, as well as I in my duties on behalf of victims, had the support of those representing peoples previously victimized, including the activists from "Jews Against Genocide." They intended to translate "never again" from a historic meaning to an active commitment and call to action on behalf of all victims. Their example has only re-enforced the commitment of most Bosnians to speak and act in the face of similar crimes and their perpetrators.

The leadership of the BiH Islamic community is particularly welcome, not only because it has buried and comforted so many victims, but because Muslims must speak out against those would hijack their religion for intolerance, authoritarianism and an assault upon diversity. (See: "Bosnia's Muslim Community Urges Safety and Release of Hostages") When Washington and European politicians speak of partnering with other Muslims to counter ISIS, BiH has both the unfortunate experience of being the victim of genocide and being a historical model of diversity.

Crimes Demand Remedies for Victims and not Just Punishment for Perpetrators!

The crimes committed by the JCE advanced by Karadzic and his cohorts reminds very much of the grave violations of international humanitarian law now committed by ISIS. As the International Tribunal (ICTY) summarizes in convicting Karadzic: 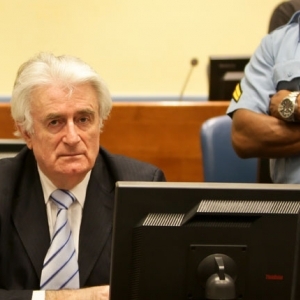 The Chamber found that Karadžić committed these crimes through his participation in four joint criminal enterprises (JCE). The Overarching JCE, which existed between October 1991 and November 1995, included a common plan to permanently remove Bosnian Muslims and Bosnian Croats from Bosnian Serb-claimed territory through the commission of crimes in municipalities throughout BiH (Municipalities). The Chamber found that a vast number of Bosnian Muslims and Bosnian Croats in the Municipalities were forcibly displaced from their homes by Serb Forces. Other victims were arrested, detained in detention facilities, often under inhumane living conditions, subjected to torture, beatings, rape and other acts of sexual violence, and then transported out of the Municipalities. Serb Forces also killed many Bosnian Muslims and Bosnian Croats during and after the take-over of the Municipalities, in mass executions or following attacks on non-Serb villages. (See: "Tribunal Convicts Radovan Karadzic for Crimes in Bosnia and Herzegovina")

Washington's now designation of ISIS as being culpable for mass rape and efforts to eliminate a defined group from its homes, as was the case in BiH, also constitutes genocide as referenced by U.S. Secretary of State John Kerry in his more substantive statement: "One element of genocide is the intent to destroy an ethnic or religious group, in whole or in part... The U.S. has vowed to deliver the evidence as well as perpetrators to the "competent court or tribunal." (See: US State Dept. "Remarks on Daesh and Genocide")

As a signatory to the Rome Statute, I would urge that trial(s) before the International Criminal Court (ICC) would best serve the interests of justice, the rule of law, victims and delivering an impartial judgment based on shared our shared values and civilization. There are also several other questions though that should be raised beyond this immediate first step:

1. Will the U.S. and international community take further actions not only to "defeat Daesh" but also protect the targeted communities?

2. What efforts by the U.S. to urge the UN Security Council to formally refer the conflict(s) in Syria and Iraq to the ICC?

3. Will the U.S. advance to become member of the ICC, and thus give further credence to calls for the rule of law?

4. The Assad regime and potentially others (including Putin's military forces) within Syria culpable for grave violations of international humanitarian law are no less deserving of investigation and prosecution for such crimes -- what accountability there or will the Assad regime in effect be reconfirmed by expediency through the rationale of gaining a signature on a presumed peace accord?

5. Most critically, will the victims of ISIS be enabled to return to their ancestral homes or will the fruits of the crime be allowed to root them out, something that unfortunately still haunts Bosnia? This also helps address the refugee flow that now overwhelms Europe.

Contrary to the despair or cynicism that the experience of the Bosnia genocide may nurture, we have to be even more resolute in the face of today's crimes and the omnipresent indifference or rationalizations. Some Serbian political leaders have sought to explain the conviction of Karadzic by accusing the ICTY of bias against Serbs. While the Tribunal has not been always to the satisfaction of Bosnians, it is probably more accurate to suggest that as a whole bias has been a more negative factor against Muslims including European Muslims, as well as the failures to respond in timely and adequate manner to the genocide committed upon the Bosnians. Regardless, our courage and character is best realized when we do not shrink from the truth of what smears our identity but rather confront it. The presumed injustices, current or historical, done to Muslims can in no way justify or mitigate the crimes committed by ISIS. We honor the Serbs (Christians), Muslims, Jews, Buddhists, Hindus, atheists who seek to root out the evil committed in their name.

The conviction of Karadzic was not a judgment upon Serbs as the indictment of ISIS is not of Muslims. Perhaps though there is now a clearer legal and ethical pronouncement on the past compromises of western democracies and the international community with something that is now both defined and convicted as a "Joint Criminal Enterprise." There is also an ever greater responsibility, whether Muslim, Christian, Jewish, Buddhist, Hindu, etc. when a JCE hijacks our religions or usurps the narrative of patriotism and commits such grave crimes in our name. They seek to make us by our identity complicit in their crimes, and we must ask if our silence or failure to challenge is an acquiescence and a stain?   @MuhamedSacirbey