Breaking up is hard to do -- and it's even more difficult when the ex gets stuck in your chimney.

Genoveva Nunez-Figueroa, 30, was arrested Sunday morning after police say she spent a few hours stuck in a chimney of a home of a man who had recently ended a relationship with her.

A neighbor heard the suspect crying at about 5:45 a.m. and called 911. The Ventura County Fire Department's search and rescue squad came to the scene and found Nunez-Figueroa stuck in the chimney about eight feet from the top. 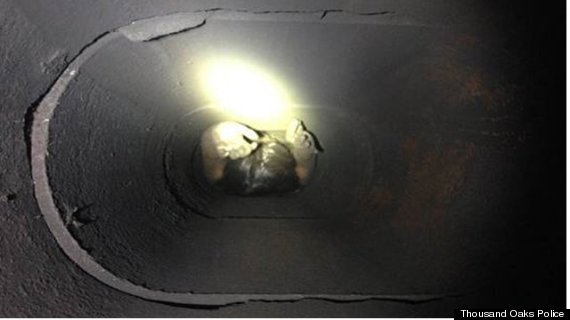 She had been there an estimated two hours, Capt. Renee Ferguson of the Ventura County Sheriff’s Department told KTLA TV.

In order to free Nunez-Figueroa, the rescue crew had to dismantle the chimney and lubricate her with dish soap.

The suspect was finally removed from the chimney around 8:15 a.m. and was transported to a hospital to be evaluated, according to KABC TV.

After the evaluation, Nunez-Figueroa was arrested on suspicion of illegal entry and giving false information to police, NBC Los Angeles reports.

The homeowner, who only gave his name as "Lawrence," was away from the house when the incident happened.

He told CBS Los Angeles that he knew Nunez-Figueroa.

“It wasn’t Santa Claus, for sure,” Lawrence told the station. “Having someone in your chimney is like kind of a weird thing you wouldn’t expect to come home to."

Lawrence told authorities he had met the suspect online and went out with her six times before ending things recently.

“It’s actually the second attempt for her trying to access the inside of my house, from the roof,” Lawrence told CBS Los Angeles. “Which just goes to show you,” he said, “you have to be careful who you meet online.”

Although Lawrence now has to deal with a dismantled chimney, Nunez-Figueroa's family has offered to pay for the repair, saying the suspect is a good person.