I say, "I'm from Brooklyn," like there's a grenade exploding from my mouth.

I walk different after saying it. My step is a little harder, my shoulders more square, nose held higher in the air. It's a momentary self-assuredness that follows me for a spell.

I feel it rise into my jaw when I see her approach across the water as I'm crossing the Williamsburg Bridge; when the train doors close on First Avenue and the L snakes under the East River.

The thing is, the Brooklyn I'm from isn't the Brooklyn of today. It's not that funky Brooklyn that I keep in my back pocket in case somebody tries it. (You don't wanna mess with a girl from 1980s Bushwick.)

My Brooklyn is the Brooklyn of the Domino sugar factory and rubble. Nostalgia can be a confusing thing. It isn't always for the neat and pristine. It's sometimes a longing for something you know wasn't always pretty, but was always home.

When people speak of the old Brooklyn, when they refer to it in articles and essays, the Brooklyn before the organic markets and food co-ops, before there was a trash can on every corner and community gardens -- they talk about it like it was all bad, like all there was was poverty and crack and single moms (because you know, we're the bane of existence, right?) violence and high school dropouts.

When I discovered my seven year old self in a picture in an exhibit by Meryl Meisler, I hesitated before reaching out to her. I was far too familiar with the images of my old neighborhood from way back when. Yes, there was drugs; yes, there were addicts and there was violence and the blaring sirens from the fire trucks were so common that they became white noise -- but you know what? There was also love, there were people who thrived in that and loved in that, and raised families in that. What I loved about Meryl's work was that that's what she focused on. There's no images of the crack vials in the gutter or the mother pulling hard on her pipe while her child looks on. There's none of that. Why? Because there was more than that, and that's what Meryl documented. 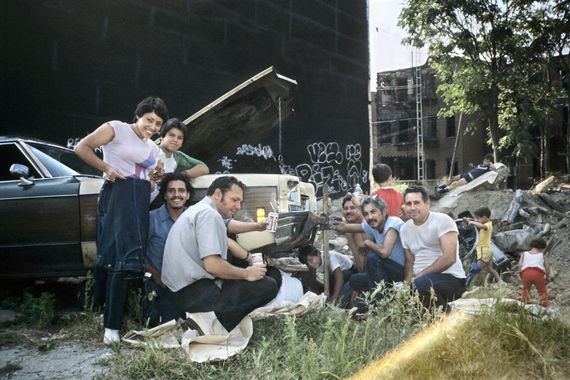 So when people talk about gentrification like it's something that saved the neighborhood, that saved my people, it's real reminiscent of the defense of colonization and the idea that the white man came to the new world to civilize the savages. There's something insidious about that mindset. It's called Columbus-ing.

When I think of Brooklyn, the first word that comes to mind is home. But my home isn't today's Brooklyn. Those quaint cafés and yoga studios were not built for me. My Brooklyn isn't the Brooklyn where a townhouse just hit the market with an asking price of $40 million dollars.

There's something about losing our homes that's particularly grating. Humans have a natural pull to where we're from, like umbilical cords that keep us linked to a maternal figure, a patria, something greater than ourselves; a place of where we felt safe and welcome, where we could be our full selves. To have that taken away and be made to feel like strangers in our own land is jarring and painful in so many ways.

I miss the sense of community of the old neighborhood. I miss the intrinsic Latino flavor that signaled that I was home as soon as I stepped off the L train on Myrtle Avenue. The piragüero on the corner who knew me by name and always asked for my mother. The borinqueña waving in the wind from every other window. The bodeguero Miguel who gave us credit when the food stamps ran out. And our Boricua neighbor from next door who gave us a tembleque during the holidays and mom gave her tamales.

We all need to feel like we belong somewhere, and that's what Bushwick gave me, especially after I left for boarding school at 13 and found myself rootless in the world. Nostalgia is strange like that. Sometimes it's a longing for the gritty and profane.

My mind goes to that woman who came to the Bushwick Open Studios Exhibit I co-curated with Meryl Meisler (Defying Devastation: Bushwick Then and Now) and read my work on gentrification. She shifted uncomfortably as she read, breathing heavily, her leg started shaking and she folded her arms over her chest, folding and unfolding several times. "But Nyssa's white," she told me, as if I hadn't notice this fact about Nyssa, the owner of The Living Gallery. "What's your point?" "Well, you're talking about us." "Is that all you got from the piece?" She rolled her eyes, shrugged and walked away.

She didn't want to understand where I was coming from, or at least I didn't see her making any attempt to. I heard the defensiveness in her voice, the "us versus you" in her tone. It didn't matter that the exhibit was an attempt at a dialogue about gentrification and how we can possibly connect those who have been here for a long time and those who are fresh arrivals, new to the city and this neighborhood that has so much history, so much life, where so much existed before even this woman was born. I wanted to tell her that before she came to this earth, I'd had my first kiss less than a mile away in the hallway of 365 Palmetto Street. Across the street and three blocks down was where I started to come out of my shell and saw that maybe I did have a knack for this writing thing. And a block over from there was where I practiced for months before hopping on a plane to Turkey in April of 1989 to represent the U.S. at the NATO Children of the World Festival. The irony does not escape me that a group of brown and black kids from Bushwick were chosen to represent the U.S. at this festival all those years ago.

These days, when I go back to Bushwick what I remember isn't what is. The corriente that ran through the neighborhood is gone. There's no Jerry Rivera blasting from passing cars. La doña who never left her spot at the window of her second floor apartment on Grove Street, is gone. She took her PR curtain flag with her. The cuchifrito spot on the corner is gone too; there's a $5 cappuccino spot there now. When I went in to order a café, the barrista said, "You mean coffee?" "No," I said, "I mean café." I almost slapped him when he charged me $3 for an eight ounce cup. The café wasn't even good.

I read on Twitter that on her desk writer Tayari Jones has "a tiny jar containing a few spoonfuls of earth from Lorain, Ohio. This is how much I love Toni Morrison." I thought of that junk yard next to our building at 383 Palmetto Street, and that backyard where I'd climb up the plum tree. In those connected yards was where I started telling myself stories. There are the roots to this writing life I created for myself. In that junk yard, among the debris, the lumber with rusted nails sticking out at all angles, the piles of car tires and license plates, the feral cats that nested beneath all that rubble, there I started telling myself stories, I started imagining a different life, I imagined myself the female Indiana Jones and that I was a dancer like Leroy and Coco in Fame.

If I could, I'd have a tiny jar containing spoonfuls of that soil. The soil from back then. The soil that fed mami's garden those two years that she planted her tomatoes and peppers and eggplant, before she brought her plants inside because there she could protect them, outside she could not.

That soil didn't need anyone to save it. That soil is what did the saving. That soil is what molded and saved this girl, who is now writing this essay at her desk, living this life that she started imagining way back in the Brooklyn people denigrate.

The other day at a reading in Greenpoint, an audience member asked, "Where are you from and how does that shape your work?" I said, "I'm from Brooklyn," like I had a grenade exploding in my mouth. I survived boarding school and Columbia University and those people that said I couldn't and I shouldn't because I'm brown and woman and poor, I survived all that because I'm from Brooklyn. Nearly 40 years old and that's still true.