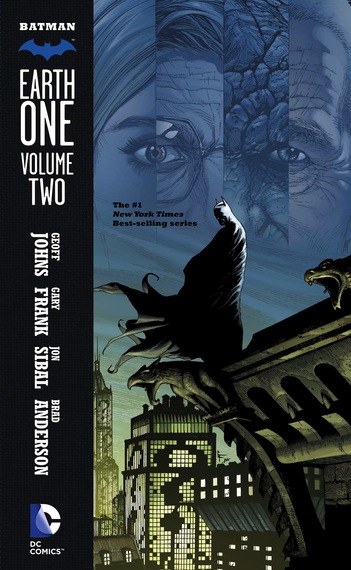 Batman is one of the most iconic characters of all time. You know everything about him, about his origin, what makes him tick. Everyone does.

So how does one make all of that fresh again? DC Comics' Chief Creative Officer Geoff Johns and artist Gary Frank set out to do just that with Batman: Earth One. The second volume just came out in hardcover and they've managed to take a character that is so thoroughly known and have made him surprising and fresh.

Batman: Earth One: Volume Two picks up some time after the first left off. This version of Bruce Wayne is still trying to find his way and Alfred Pennyworth, his war veteran of an assistant, chides him for not killing the criminals he beats up.

This story gives us a look at Batman facing off against a reimagined version of the Riddler, who might be more like Bruce than you might realize, and it's a thrilling story, told in a completely self-contained graphic novel. The art, as you can see below, is stunning. They've truly taken their time to craft something that will stand alone on the shelf, both as a story and a work of art. 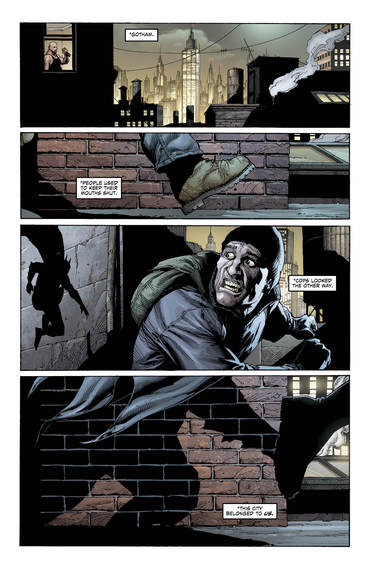 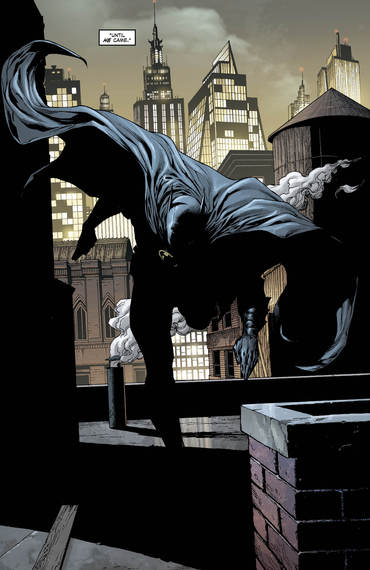 I was able to talk to Geoff Johns and Gary Frank about their process work on the book in honor of the its release:

Bryan Young: As you were working on this, how did you go about trying to differentiate this from the first one? The first one is very much an origin and this one is Bruce and Alfred already settled into that routine. The costume changes a little bit over the course of the book. I'm wondering, what was your process in advancing the story and the look?

Gary Frank: In terms of coming on the previous book we decided at the beginning of the whole thing since it was the development of Batman and Bruce becoming Batman, that the costume was also something that should be developed. In the beginning we start out with quite an amateurish attempt at a costume, so we have the laces and stuff. It feels like something the guys' put together. Later Lucius Fox comes aboard and he gets access to more ideas and more stuff. We have to give the costume the look of Batman becoming more and more refined along with the idea of Batman in Bruce's mind, how he sees Batman developing. The exterior needs to reflect that. So that was something that was decided right at the beginning, that this would be a series of progressions.

BY: As far as the Riddler, who is sort of the big bad guy, it's pretty easy to draw some parallels with Riddler and Bruce. Maybe it wasn't intentional, but it seems like we know very little about the Riddler but as things unfold we realize he might not be so different from Bruce or Bruce's ideas or maybe Alfred. How did you decide to tackle the Riddler this way?

Geoff Johns: All of the characters have in common a question of identity, of who they really are. There are a lot of misconceptions about them and on the surface you might think the Riddler is something and Croc is something and Batman is something and ultimately you learn they are someone else entirely. And the question of identity is a theme we put through this a lot. The Riddler suggests he is somebody that is a vigilante like Batman. Is he a mad man? Or a vigilante taking out the what he perceives as the corrupt influence on Gotham? There is that question of who the Riddler is and why he's really doing this. And what we find out through this book is, conceptually, it's more about the secrets behind identity and masks and preconceived notions of who people are in Gotham that really permeates this story and it's value. And that's what the Riddler represents, those questions.

BY: It's very much layered through there. Not just the identities of who his victims might be but who his identity is and what he means and who Bruce is and who Alfred really is too. It was a really fascinating piece and if feels there is a lot more to it than you get just reading it on the surface.

GJ: I'm hoping were doing something that people can read multiple times and get more out of it. We really worked hard to have a pretty exciting story but also an emotionally complex one and one to make you think a little bit more about these characters than you might initially.

BY: With the design of the book: as you are going through and designing things are you getting in the head of the character who would be designing them, trying to design from their perspective?

GF: With the whole thing, when we start in volume one, there's the scene in the alley, where Batman reaches into his utility belt and produces some money for a homeless person. We're dealing with a Batman that hasn't read 75 years of Batman books, he hasn't seen Batman films, he doesn't know what Batman's supposed to be as most of us do. From that point of view, the costume and everything about it, he's choosing those things for his own reasons, but he's not trying to make a superhero costume. It's utilitarian. He's assembling the things he needs and he thinks this costume and the bat thing, we've got the vague silhouette because the bat scared him as a child so these things are canon across every Batman story that's ever been done, in every universe, and in every variation. These things need to remain intact, but he's not making a superhero costume. Everything needs to based on what the man, what Bruce Wayne, what our Bruce Wayne would do, what he would wear, how he would choose to look.

GJ: I love all of the design work Gary's done, it's so true to the characters. If you look at them you recognize them. But they're still uniquely of this Earth One world. Well grounded. He's finding his own way and we're really trying to create our own Batman here.

BY: There are a lot of character moments in here that seem like they will pay off in future books. You obviously wanted to maintain this as a stand alone, but how did you balance that with setting things up for the future?

GJ: When Gary and I started the first volume, it was all about laying the foundation, and then we suggested at the end that the Riddler would come in and be an antagonist in our second volume. We always planned on doing a Volume Two and making it Riddler. We have a beginning, middle and end for our entire Batman: Earth One saga told in a series of graphic novels. Although each one is suppose to be a cinematic experience that stands on its own, they do build to a big picture of hopefully an organic tapestry that is Gotham City. Our Gotham City is a very different Gotham City than the Gothams we've seen before. There is an innate madness inherent in Gotham through what the Arkhams put into it in a big way. And that carries over and is personified by Bruce Wayne, who is a product of both the Wayne and the Arkham legacy. He's kind of the last man standing. We continue to explore that through Bruce and that is going to be a big part of the series. We know that certain aspects and characters and revelations we have coming up for this bigger story, looking across all we plan to do, some of the seeds are planted in each one of these and they will grow as we move forward. You can see there is already a lot of different things we've set up in volume two that can be carried off into volume three and beyond.

GF: We talk a lot about the characters and about their backgrounds and a lot of it may never see a page. Thinking about Alfred, we've talked a lot about Alfred, where he comes from, what his past is about. So even though we might not necessarily do some Alfred backstory at some point, there are still little things that come out.

GJ: We actually have an entire backstory on Alfred and characters and everything that, you know, we may or may not get to it. But we really fleshed these guys out. We know where they come from and where they're going and how we execute that with the future volumes is what we are working on right now.

BY: If you were making a pitch to a reader who doesn't read a lot of comic books, why would Batman: Earth One be a good entry point?

GJ: You can pick up Volume One or Volume Two or both and get a whole story in one sitting. You don't have to read any other comics. You don't have to know anything. And it's going to take a familiar character and hopefully supplies you with some changes you don't expect. I don't think you'll find a better art team anywhere. It's just a beautiful book. As much as people have read Batman, we're hoping they check this out because it is refreshing and new and emotional and you're going to be on the ground floor with a new kind of Batman for 2015.

GF: Also, the fact it's a book about a character. You don't necessarily need to be a Batman fan or anything, though hopefully people who are Batman fans will get that as well. Geoff's great skill with the character is to script them back to their essence and kind of understand why they were great characters in the first place.

BY: Should I hold out hope for a Robin in this universe?

GJ: We're exploring a lot of characters and we've got a lot of plans and a lot of ideas. We're going to get to a lot of them. We don't want to say just who yet. But I wouldn't count anyone out just yet.