In 2012, Republicans won control of the House of Representative despite Democratic candidates winning a combined 1.5 million more votes than Republican candidates. How is this possible? The aggregation of votes into single-member districts through redistricting is the cause. It has happened before. Similar anti-majoritarian outcomes occurred in the 2000 presidential election -- where Gore won a half million more popular votes than Bush but lost the Electoral College -- and it previously happened in the House of Representatives in the 1996 election.

A popular claim among some is that Republicans were innocent in partisan gerrymandering in the most recent congressional redistricting. When one draws congressional districts, Democrats are at a disadvantage because of where they live. Pro-Republican maps naturally result.

The scholars most cited for this claim are Jowei Chen at University of Michigan and Jonathan Rodden at Stanford University. In an article recently published in the Quarterly Journal of Political Science, they examine post-2000 census Florida redistricting and find Democrats are "unintentionally gerrymandered" whereby "one party's voters are more geographically clustered than those of the opposing party due to residential patterns and human geography" (p.2).

This claim has appeared in numerous places, including most prominently The Money Cage, Harry Enten at The Guardian, and the New York Times, among many others.

That Democrats gerrymander themselves by where they live is attractive to those familiar with urban centers like New York City and San Francisco, where few Republicans can be found. However, California and New York have relatively fair congressional redistricting plans drawn by a non-partisan commission and a court, respectively. Republicans effectively used partisan gerrymandering to their advantage in places where they controlled redistricting, such as Florida, Michigan, Ohio, Pennsylvania, and Virginia. It is here where the claim should be evaluated, which is why Drs. Chen and Rodden's Florida analysis is compelling.

Advances in information technology have enabled the public to verify the claim that Democrats gerrymander themselves by where they live. In the most recent round of redistricting, the public could draw redistricting plans through their web-browsers using Dave's Redistricting App; the open-source DistrictBuilder software created by myself, Dr. Altman at MIT, and our software development partner Azavea; or commercial or internally developed applications distributed by redistricting authorities.

Geographically compact plans that are also politically fair -- drawn by the public -- serve as counter-examples disproving the contention that Democrats gerrymander themselves. In some cases, these plans were drawn by college students, showing that students teach can something to professors at the top universities.

Upon some reflection by anyone who has drawn a redistricting plan -- and I've been a redistricting consultant in 14 states -- geography is not really constraining on congressional redistricting. Congressional districts are very large. In moderate- to large-sized states they consist of over 700,000 persons. It is easy in all but the most densely-urban areas to combine urban, suburban, and rural voters within a compact district. And again, the plans implemented in the states with the largest urban centers are not responsible for the current partisan imbalance among the congressional plans.

Furthermore, compactness is a value that is not legally required for redistricting in many states. Even where compactness is required, it is rarely enforced by the courts. In a series of rulings in the 1990s regarding North Carolina's congressional redistricting, called the Shaw cases, the Supreme Court indicated violations of compactness are relevant only when race is the predominant factor of the drawing of the districts. State courts have been reticent to enforce compactness requirements when they are found in state constitutions. I am aware of only one instance of an Illinois state Senate district being overturned in the 1990s for a state constitutional compactness violation.

In sum, compactness is not functionally required, and even it were, it is not constraining to the creation of fair maps. I next turn to in-depth analyses of what can be learned from redistricting plans produced by the Florida public that provides evidence for my latter claim.

A Case Study of Florida

In 2010, Florida voters adopted Amendment 6, which provides for redistricting criteria including that "no apportionment plan or individual district shall be drawn with the intent to favor or disfavor a political party..." Democrats and public interest groups are currently challenging in state court the congressional redistricting plan adopted by the Republican state government in a lawsuit, known as Romo v Scott.

In 2010, Florida's legislature deployed a web-based redistricting tool, which members of the public used to draw redistricting plans that were submitted to the legislature for consideration. Twenty-two of these congressional plans were legal, in that they were compact, contiguous, assigned all geography, and had nearly equal population deviations. 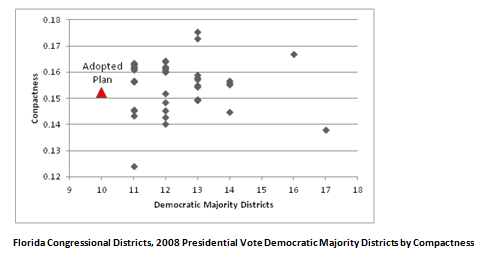 I plot of the number of Democratic-majority districts and their compactness for all 22 public plans, 19 legislative plans, and two plans submitted by plaintiffs in the litigation. A brief word on compactness: There are many ways to measure compactness. Here, the average ratio of the perimeter to the area of the districts is reported -- also called the Schwartzberg measure. The compactness scores are normalized such that larger numbers indicate more compact districts.

(As an aside, only two of the 13-district Democratic-majority plans were proposed by Democrats in the Florida legislature, suggesting that the public approaches redistricting much differently than even Democratic politicians, who may be motivated both by partisan advantage and to protect their incumbents.)

The scholars most often cited for the claim that Democrats gerrymander themselves by being overly concentrated where they live are, as stated above, Drs. Chen and Rodden. These scholars have written a recently published article in QJPS where they create an automated redistricting algorithm to generate thousands of redistricting plans, and note specifically in an analysis of post-2000 census Florida data that finds "not a single simulated plan produces at least as many Gore-leaning districts as Bush-leaning districts' (p. 18).

Tellingly, even though Drs. Chen and Rodden claim that Democrats gerrymander themselves by where they live, they never calculate the compactness of their automatically generated plans. They simply claim that their algorithm produces compact districts. It is incumbent for rigorous scholars who produce new methods to validate the correctness of their methods before drawing inferences.

The difficulties of automated redistricting are laid bare in an expert report by Drs. Chen and Rodden for plaintiffs in the state court litigation challenging the adopted congressional plan. In their expert report, they re-apply their analysis to post-2010 census data and find, contrary to their QJPS article, that:

"Our analysis concludes with 95 percent certainty that a non-partisan redistricting process produces a districting plan that contains between 12 and 16 districts in which McCain voters outnumber Obama voters (p.9)."

Perhaps new census and election data revealed new residential patterns in Florida. Perhaps the algorithm itself has some hidden flaws that confound the analysis. We will never know the real cause of the discrepancy between the Chen and Rodden QJPS article and expert report because automated redistricting in the U.S. context is so challenged that it should not be put to the purpose of making inferential claims such as those found in the QJPS article.

If a redistricting plan measures the same or better on all other legal criteria, AND such a plan beats a plan on a criterion of interest, then the existence of such a plan reveals that the criteria is not constraining. In this case, plans generated by the public are both more compact and politically fair than the adopted plan. These plans demonstrate that the legislature did not necessarily have fairness in mind when they drew their congressional plan. The public plans also demonstrate -- consistent with Drs. Chen and Rodden's expert report -- that geography does not prevent the creation of a fair congressional plan in Florida.

Note: The analysis here is drawn from a forthcoming chapter in a book edited by Seth McKee on Florida's recent redistricting experience, entitled Jigsaw Puzzle Politics in the Sunshine State, co-authored with my colleague Micah Altman. All opinions and errors are my own.