Ghanaian economist George Ayittey attended the Oslo Freedom Forum in May. There, he sat down with me to talk about defeating dictators.

Thor Halvorssen: How pervasive is dictatorship in Africa today? George Ayittey: Africa has more dictators per capita than any other continent. In 1990, only four out of the 54 African countries were democratic; today, 21 years later, it is only 15. Fewer than ten can be deemed economic success stories and a free media exists in only ten African countries. Some people call this progress... that's not what I would call it. 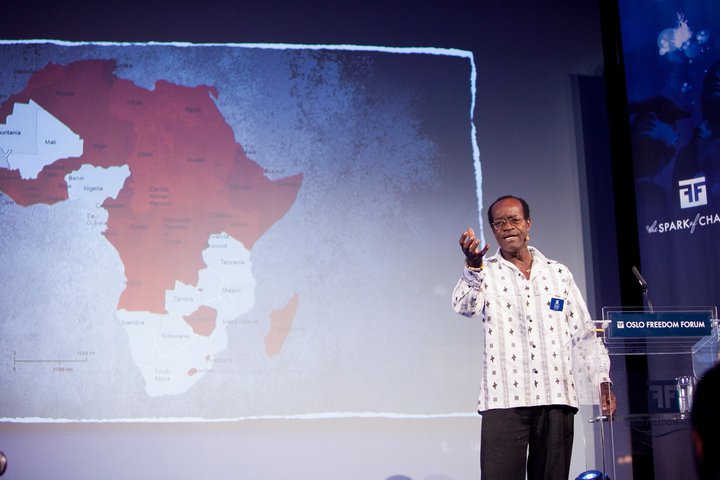 George Ayittey presents at the Oslo Freedom Forum. In the Africa graphic behind him dictatorships are shown in red, democracies in white.

TH: That means at least 39 countries in Africa are still ruled by dictators. GA: And we are fed up. Fed up! Angry Africans are fed up and are taking the heat to them. Dictators cause the world's worst problems: all the collapsed states, and all the devastated economies. All the vapid cases of corruption, grand theft, and naked plunder of the treasury are caused by dictators, leaving in their wake trails of wanton destruction, horrendous carnage and human debris. But guess who's always cleaning up their mess? For decades, the West has spent trillions of dollars trying to persuade, cajole, and even bribe them to reform their abominable political and economic systems. The West has even tried appeasement in their rapprochement. Enough! TH: But shouldn't the West pressure dictators with other measures like cutting off IMF loans and international aid packages and threaten to stop recognizing them diplomatically? GA: The West has to understand that dictators never have and never will be interested in reform. They are stone deaf and impervious to reason. Period. Dictators are allergic to reform, and they are cunning survivors. They will do whatever it takes to preserve their power and wealth, no matter how much blood ends up on their hands. They are master deceivers and talented manipulators who cannot be trusted to change. TH: What kind of resources do they need in order to maintain their survival? Surely the loss of Western funding would hinder them? GA: After a mere four-and-a-half years in office, the late dictator of Nigeria, Sani Abacha, managed to accumulate a personal fortune of 5 billion dollars. Omar Al-Bashir has siphoned 7 billion out of Sudan. And Hosni Mubarak of Egypt managed to accumulate a personal fortune of 40 billion dollars! All stolen from their own people. Let me put that into perspective. The net worth of all U.S. presidents, 43 of them, from Washington to Obama, amounted to 2.7 billion. That means that Africa's kamikaze bandits each stole more than the net worth of all U.S. presidents and then more. TH: How does a human rights activist fight against 40 billion dollars of bribe money? GA: This is exactly what happened in Egypt and Tunisia. Fed up with their corrupt antics, angry street demonstrators started pushing dictators out: Ben Ali fled, Mubarak was shoved aside, and more coconuts will tumble But caution: Noisy rah-rah street demonstrations alone are not enough. Three cardinal principles must be followed for a popular revolution to succeed. First, a united coalition of opposition forces is essential. Second, the dictator's modus operandi -- strengths and weakness -- must be studied in detail. Lastly, getting the sequence of reform right is crucial; there are several steps that must be followed precisely in order. TH: The sequence you just described should perhaps be named Ayittey's law. By a "coalition" do you mean a political alliance? Wouldn't that be difficult in most of these countries suffering under dictatorships or one-party rule?

GA: A small group of pro-democracy activists -- call it an elders council -- is imperative to serve as the nerve center, plan strategically, and coordinate the activities of the various opposition groups, civil society groups and youth movements. For example, The Gathering in Sudan in 1985, The Danube Circle in Hungary in 1988, Charter 77 in Czechoslovakia in 1989 and the Alliance for Change in Ghana in 1995, in which I participated. If the dictator schedules an election, the council must rope all political parties into an electoral alliance. In 2010, dictators "won" elections because of a divided opposition field. For funding, the council should rely on its own diaspora community, not on Western donors. TH: Why should reformers depend on their community as opposed to Western donors? GA: Reform must start with intellectual freedom and freedom of the press. Reform must come from within -- made by the people themselves, not by Western governments or financial institutions. Internally-initiated reform is far more sustainable and enduring. The self-immolation of Mohammed Bouazizi started the Arab Spring. His was the ultimate and extreme form of freedom of expression. 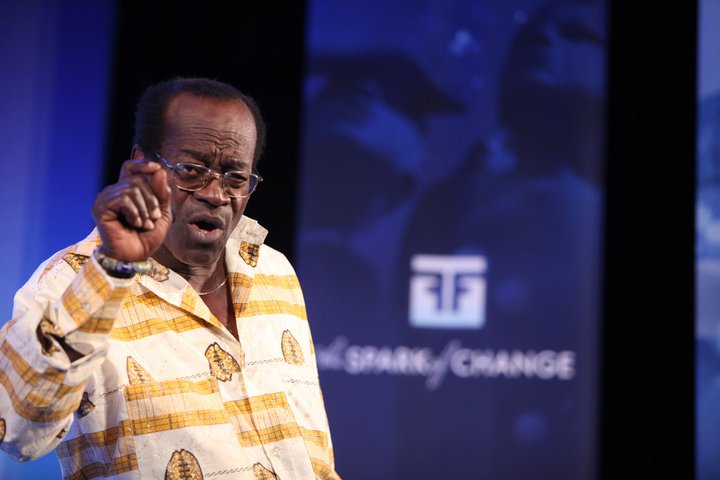 TH: Ok, so first a coalition, second we find the dictator's weaknesses... GA: The modus operandi of all dictators is essentially the same: Besides parliament, if there is one, they seize control of six key state institutions (the security forces, the media, the civil service, the judiciary, the electoral commission, and the central bank), pack them with their supporters, and debauch them to serve their interests. To succeed, a popular revolution must wrestle control of at least one or more of these institutions out of the dictator's clutches. The game was over for Ben Ali and Hosni Mubarak when the military refused to fire on civilians. Ditto in the Philippines in 1986 and Georgia in November 2003, where the security forces were charmed with roses (hence, the "Rose Revolution.") Ukraine's Orange revolution of November 2004 won the Supreme Court to its side and Pakistan's Black Revolution of March 2007 had the full support of the judiciary. Let me give you 3 more ways of toppling a dictator's stronghold: First, get the media out of their hands: create pirate radios, use social media. That's what will unleash the reforms we all cherish so dearly, not Western sermons, sanctions, or appeasement. Second, hit them with their own constitution. For example, Article 35 of China's Constitution guarantees freedom of speech, press, assembly, and association. In Ghana, we used the Constitution and the courts to free the airwaves, leading to a proliferation of FM Radio stations, which were instrumental in ousting the regime in 2000. Third, a dictator's weakness is exploited by s-t-r-e-t-c-h-i-n-g its military geographically. Shut down the civil service and any military regime will collapse. It will not have enough soldiers to replace civil servants across the country; we saw this in Ghana in 1978 and Benin in 1989. We also saw the same thing this year, as street protests in Tunisia and Egypt erupted simultaneously in several cities and towns, straining security forces. TH: But, that's not the end, is it? Toppling the dictator is just the beginning... GA: Getting rid of the dictator is only a first step in establishing a free society. The dictatorship must also be disassembled. We didn't do this in Africa in the 1960's. We removed the white colonialists and they were replaced by black neo-colonialists, Swiss bank socialists, crocodile liberalists, quack revolutionaries, and briefcase bandits.

Africans will tell you, we struggled very hard to remove one cockroach from power and the next rat came to do exactly the same thing. This is because we did not disassemble the dictatorship state. To disassemble a dictatorship you have to do things in order and steps. This is like overhauling a vehicle where repairs must be made in order: you don't fix the transmission when the battery is dead, nor do you install a new sound system when the battery is dead.

TH: What happens when revolutions don't follow this sequence in that order?

GA: Reversals of revolutions occurred in several countries because the reform process was out of sequence or haphazard. For example, premature economic liberalization -- like the "shock therapy" in Poland, the Czech Republic, and Russia in the early 1990s -- produced vampire capitalists. The institutional reforms and legal framework needed to make economic liberalization succeed had not been undertaken. The nomenklatura remained firmly entrenched, frustrating reforms. A few (eight) oligarchs used inside knowledge and political connections to gobble up state assets at rock-bottom prices and became instant billionaires.

Most disastrous for Africa was economic liberalization ahead of all other types of reform -- like the Washington Consensus. To be sure, economic liberalization engenders prosperity but dictators never level any playing field. They implement only those types of reforms that benefit themselves, their families, and their cronies. Those African countries that pursued economic liberalization eventually failed the political test and imploded: Burkina Faso, Egypt, Ivory Coast, Kenya, Libya, Madagascar, Tunisia, and Zimbabwe. In Egypt, the street protesters who ousted Hosni Mubarak now seek to roll back his free-market reforms and hold its beneficiaries accountable. And Ivory Coast, once described as an "economic miracle," now lies in ruins. China currently faces this quandary. If it opens up politically, the Communist Party will be swept away; if it doesn't, it may disintegrate like the former Soviet Union.

TH: So, in your speech at the Oslo Freedom Forum you will provide a roadmap on how to defeat a dictator in three principles and five steps.

I will dedicate my speech to the following, who are also mentioned in my forthcoming book: in Africa: the Cheetah generation -- taking back Africa one village at a time -- they have taken back Tunisia and Egypt and will take back more African countries; in Bahrain: Ali Abdulemam, who was invited to speak at this event in Oslo but has suddenly disappeared; Belarus: Oleg Bebenin; China: Liu Xiaobo; Iran: Neda Agha Soltan; Russia: Anna Politkovskaya; Tunisia: Mohammed Bouazizi; Venezuela: Judge María Lourdes Afiuni; and to pro-democracy activists in Burkina Faso, Cameroon, Ethiopia, Libya, Syria, Uganda, Yemen, Zimbabwe and elsewhere.

The reason why I will do this is because dictatorships are not unique to Africa alone and to show solidarity with others who are also struggling for freedom -- a stance the Oslo Freedom Forum has admirably demonstrated. By working together and learning from each other we can defeat these heinous dictators.

George Ayittey is from Ghana and he is president of the Free Africa Foundation in Washington, DC. His new book, Defeating Dictators, will be published by Palgrave/MacMillan in November. Follow him on Twitter. Thor Halvorssen is president of the New York-based Human Rights Foundation and founder and CEO of the Oslo Freedom Forum. Follow him on Twitter and on Facebook.