His Facebook page includes information on his location (Dallas, TX), birth date (July 6, 1946), education (Harvard Business School and Yale), as well as links to the George W. Bush Presidential Center, the Bush-Cheney Alumni Association, the Clinton-Bush Haiti Fund, and a link to Amazon, where his forthcoming book, Decision Points, is available for pre-order. There's also a link to the Washington Speakers Bureau, for those interested in scheduling an event with President Bush.

His first status update, posted around 10AM ET, read:

Since leaving office, President Bush has remained active. He has visited 20 states and 8 countries; given over 65 speeches; launched the George W. Bush Presidential Center; participated in 4 policy conferences through The Bush Institute; finished the first draft of his memoir, "Decision Points"; and partnered with President Clinton to establish the Clinton Bush Haiti Fund. More on his activities in future posts...

Laura Bush's memoir, "Spoken from the Heart," is #1 on the "New York Times" Bestseller List for the third consecutive week. To learn more, visit her website at www.laurawbush.com

His status updates are, thus far, less personal than his wife's, who has been sending short posts from her book tour.

At the time of this post, some 560 people have "liked" his page. Facebook users have posted a stream of complimentary messages on his wall (no word yet on whether the page's admin or Facebook will be monitoring the content.) "I may not have agreed with everything you did, but I never doubted your love of country or your will to protect her," wrote one user.

A Twitter account, @George_WBush, was created under his name, but it has not been verified as authentic. AFP political correspondent Olivier Knox (@OKnox) tweeted, "Sorry to disappoint, but @george_wbush is not the former president's feed, his office says, and Dubya has "no plans to tweet."" 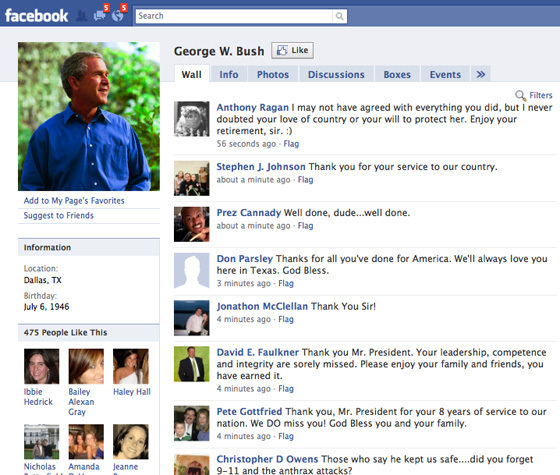