More than half of Americans view former President George W. Bush unfavorably, making him the most unpopular living U.S. president, according to
a CNN poll released Thursday.

Just 43 percent of people questioned said they have a favorable opinion of Bush, while 54 percent said they view him unfavorably. Two-thirds of Americans, in contrast, said they have a positive view of Bush's predecessor, former President Bill Clinton.

Of the other living former presidents, Jimmy Carter is viewed favorably by 54 percent of people questioned and George H.W. Bush gets a 59 percent rating.

Bush's 43-percent favorable rating is roughly the same as it was in 2010. It is higher than it was immediately following his tenure in the White House in 2009, when his favorable rating bottomed out in the high 20s.

"Don't be surprised if the Obama campaign mentions the name of George W. Bush at every opportunity, and don't be surprised if that strategy works," CNN Polling Director Keating Holland said. "And the mention of Bush's name appears to prompt at least a few people to take a more positive view of their current financial situation."

The poll also reaffirms the Obama campaign's strategy of using Clinton to help campaign for Democrats in tough races around the nation. His endorsements have helped Democratic Reps. Bill Pascrell and Mark Critz stay in office, though his work notably failed to help Milwaukee Mayor Tom Barrett (D), who lost the Wisconsin recall election Tuesday to Republican Governor Scott Walker.

Bush's unpopularity didn't prevent him from recently stealing the show at the White House, when Obama unveiled his predecessor's portrait.

Bush told Obama he was pleased to know "that when you are wandering these halls as you wrestle with tough decisions, you will now be able to gaze at this portrait and ask, 'What would George do?'" 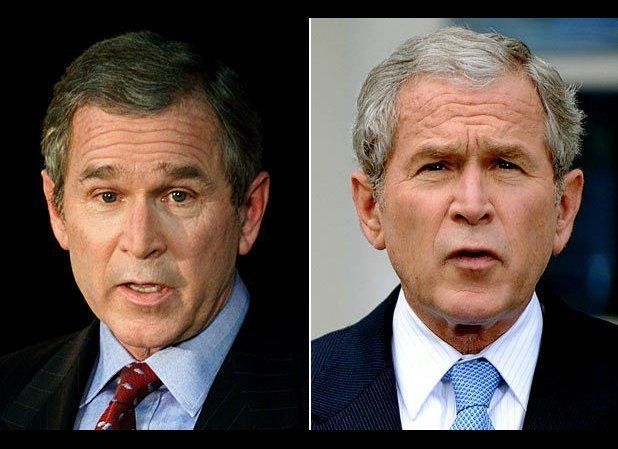