Don't worry, there are still plenty of dogs (and cats!) to see here, including a Shih Tzu, a boxer, a sheepdog, a corgi and a labrador. The pièce de résistance of canine portraits is a painting of a tragic-looking dog sitting next to window that overlooks the White House, separated from the former Bush home by a set of heavy black bars. How would Bonnie Flood, Bush's former painting teacher, explain this?

We're not sure. The Atlantic has proposed that the images are actually more self-portraits, speculating that the ex-president is channeling his own inner anguish through his series of pups. New York Magazine thinks there is more to the painting's symbolism as well, though we remain skeptical.

While we all mull over the wonder that is the 43rd president's considerable collection of paintings scroll through the slideshow below to get a taste of how art critics across the web have characterized Bush's beloved works. Let us know your critique of his oeuvre in the comments, and see the images on Gawker.

PHOTO GALLERY
The Bush Paintings: A Look Back At The Reviews

Another Documentary Dedicated To The Art World's Most Adorable Couple: Last Tuesday, a documentary titled “Herb and Dorothy 50x50” premiered at the Whitney Museum, continuing where the last story about art collectors Dorothy and Herbert Vogel left off. (The New Yorker)

LACMA Gets A Whole Lot Of Couture: The Los Angeles County Museum of Art has added 158 pieces to its 20th Century fashion collection, acquiring couture designers dating from 1880 to 2008. (Art Daily)

A Gigantic Billboard In Chelsea, Explained: The Los Angeles–based organization ForYourArt is paying tribute to the recently closed poster company, Colby Poster Printing Co, with an exhibition titled "In the Good Name of the Company." (Hyperallergic)

Russian Avant-Garde Performance Artist Vladislav Mamyshev-Monroe Died: “First I copy the face of the person from photographs, change my clothes and stand in front of the camera… And then -- click! And for a few seconds, the essence enters my body," Mamyshev-Monroe once said of his art. (Raw Story) 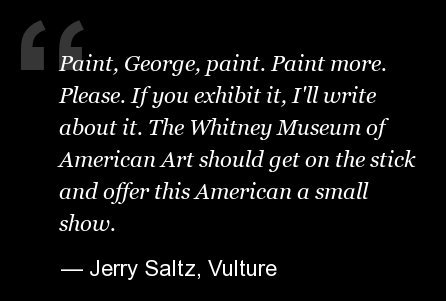