For half a century, somewhere in America, night in, night out, George Carlin stood on a stage, raging, berating, sniping, griping, purring questions, snarling answers, kicking holes in the polyester pants of hypocrisy, puking down the nice clean tux of conventional wisdom, convulsing audiences and never failing to do "this real moron thing I do: it's called THINKING!"

Thinking counts. The riled-up, curmudgeonly commentator he played to such hilarious effect onstage was shot through with an intelligence that, like no other, got under the skin of the American Dream. All his life he yanked the band-aids off that battered carcass, and poked with savage indignation at what he found underneath. And the longer he did it, the better he got.

"It's called The American Dream because to believe it, you have to be ASLEEP!"

Unlike many of his peers he died uncorrupted, uncompromised and not particularly wealthy. He was urban not suburban, his voice bristling with the energy of the Harlem streets from which he sprang, cutting through middle-class crap like a fine old bone-handled straight-razor. Because he did this live, often in lowbrow locales like blue-collar clubs and Vegas, the idea that George Carlin was a major artist may raise the hackles of the artist-ocracy. That would be their loss. In his maturity Carlin became a unique creative force, equal parts actor, philosopher, satirist, poet - a genuine man of the people, not a multi-millionaire charlatan hiding in a studio, an artist who sharpened his art with and for live human beings, not the anonymous zero of a camera lens. 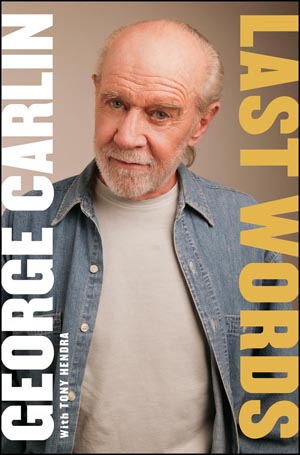 For almost four decades he criss-crossed Flyover America as many as 200 times a year, largely uninterested in playing to the choir of coastal media except for brilliant biannual HBO specials, building a devoted following of millions a few thousand at a time. George demonstrated a simple, often overlooked principle: laughter like politics is always local. It happens between real people in real places and if you weren't there you didn't really get it. Laughter overheard on a piece of furniture is just a blurred facsimile in comparison.

In short, calling George Carlin a "comedian" describes his work as inadequately as "painter" describes Francis Bacon or "guitarist" BB King. No one understood better that comedy at its best is a dark and beautiful art.

I don't intend The Greatest claim to be at the expense of our other comic geniuses. The ability to induce laughter is as varied as it is mysterious. Saying George is our greatest comedian is a way to shorthand the range and depth of his comedy - though he was also a past-master of what he called 'micro' or observational comedy - and to set him apart to this extent: now that his work is complete, he's the one to beat.

A ninth-grade dropout, his mature pieces were essays, broadsides, jazz-like solos, based on omnivorous reading and a steely logic - e.g. The Planet is fine, The People are fucked (1992), Why we don't need Ten Commandments (2001) - but without a whiff of pretension. He had a genius for distilling a lot of information and complex issues into a few succinct and hilarious sentences. Abortion and the Sanctity of Life (1996) is the most incisive essay I know, on why right-to-lifers have not the slightest respect for life. Far more memorable and persuasive than any number of weighty studies or impassioned speeches. Consider just how much is going on in these lines:

"Conservatives want LIVE babies so they can raise them to be DEAD soldiers."

"If life is so sacred] how come when it's us it's an abortion but when it's a chicken it's an omelet?"

It was the big things George wanted to deal with - he had zero interest in celebrity and topical humor - especially the big things people didn't want comedians to deal with, like abortion, religion, God, rape, mass murder, patriotism, suicide, random disasters and of course, that sport of fat white business cocksuckers in cute little knickerbockers, golf.

"Ever watched golf on television? It's like watching flies fuck."

He expressed satanic glee at the very things most people desperately avoid thinking about. He told me once that discovering entropy was one of his greatest moments. Wonderful that the entire planet and every species on it, including us, would gradually cease to function, decay and die. And not just what we call life - the animal and the vegetable - but the mineral: stars, galaxies, dark matter, time-space, finity itself: all subject to same iron laws of decay and death. The very nature of the Universe met his fundamental comedic standard. It's fucked. So it's funny.

It's this breadth of vision that I believe will make him remembered and quoted as a major American artist. He's certainly in the pantheon that includes H.L. Mencken and Mark Twain (whose eponymous award for humor he won a few days before his death), along with the likes of Terry Southern and Nathaniel West. His savagery and coruscating language even bear comparison to Swift. But he was something else these men of letters were not: a born clown, fall-on-the-floor-funny, a master craftsman of the stage.

Around 15 years ago George asked me to help him write his story. Not the story of his life so much as the story of his art, how despite real and self-inflicted setbacks he arrived at the place he did. Working on it was a wild, hilarious, and fascinating ride during which a cordial acquaintance became a close friendship. For several reasons the book was never finished in his lifetime; in recent months with the blessing of his daughter Kelly and his executor (and longtime manager) Jerry Hamza, I edited and brought it to completion. It was published on Tuesday by Simon and Shuster. If it had come out on its original schedule in the 90s it would've been his first bona fide book - his first published words. Now it's his fourth book and his last published words. Which is where it gets its name. I hope you find Last Words as funny, moving and intriguing to read as it was for me to help create.