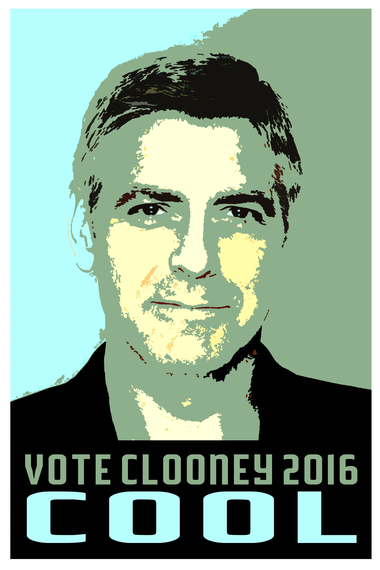 Cool, calm, and confident Clooney. If Ronald Reagan and Arnold Schwarzenegger can become politicians, perhaps we should convince Batman to come out of his cave to save the day. If Clooney isn't a good choice, then Americans should draft some other popular, good-looking person to offer his temporary services.

Why? Because we need a candidate bipartisan enough to win the presidency who would use the fix-Washington strategy Harvard Law Professor Lawrence Lessig is proposing.

Two weeks ago, Lessig announced his plan to run as a referendum President. Lessig maintains that without a referendum to address the biggest problem that besets our democratic process -- politicians kowtowing to big money donors -- no President could hope to accomplish anything. Not Hillary, not Trump, not Bernie. Congress and the two parties are too belligerent.

Lessig's plan?
• Raise one million dollars (he's almost half way there) by Labor Day.
• Get on the stage at the first Democratic debate on October 13, 2015.
• Educate his viewers about the Citizen Equality Act of 2017 that eliminates gerrymandering, institutes public financing of elections, ends corruption, and makes voting more accessible.
• Win the 2016 election. (Good luck, Larry!)
• Step down and let his Vice President take over as President as soon as the good Professor signs the Act. You can take a poll for his VP through Lessig's website.

Lessig insists that if voters elected him president, then Congress would know that the people have spoken, and that he and all of Congress are mandated to pass the Citizen Equality Act of 2017.

More than a million people have viewed Lessig's TED talk about the issue of money warping the political process. Out of 220 million eligible voters, that's still a pittance. Lessig thinks that if he explains his playbook at the Democratic debates, he'll take votes away from Bernie and Hillary.

I have a problem with Professor Lessig being the person to carry out his plan. It's not a bad idea, however, it's a pipe dream. I recognize Lessig's idealism and applaud him for it. But nobody wants to vote for a loser. Americans want to get behind a winner. To make Lessig's plan work, a person of Clooney's appeal needs to step up.

Even with a populist President, Lessig's plan is a long-shot. The president will be faced with the same problem every president will have - a Congress that cuts off his (or her) hands, derides his best intentions, and votes against the will of the citizens.