George Clooney has spent the past week traveling around Southern Sudan with Ann Curry, trying to bring attention to the threat of civil war and genocide (scroll down for AP article).

Here are some pics that Ann tweeted earlier this week, along with her captions.

PHOTOS:
"We are heading to the unstable border between N and S Sudan" 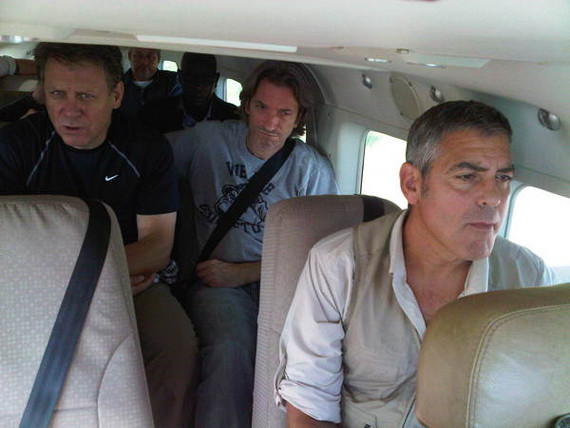 "A post http://post.ly/11Lsj and a bb photo of Clooney on top of a pickup today" 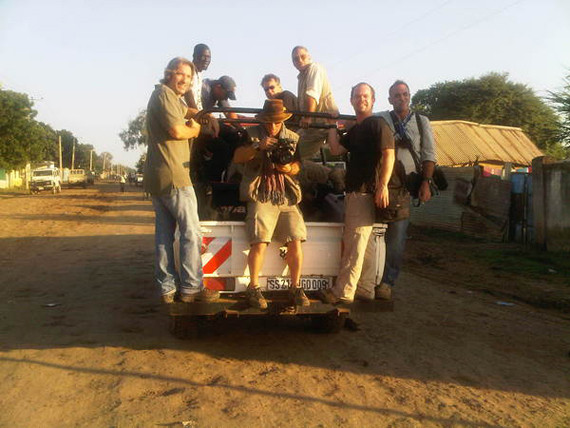 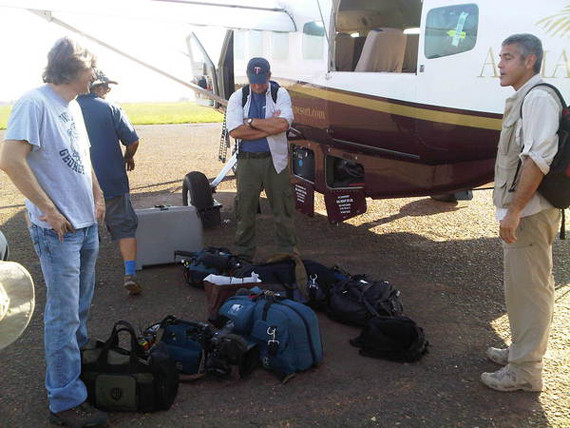 The high-level visits are putting the spotlight on the Texas-sized area of Sudan that is far less known to Americans than the western region of Darfur, where mass atrocities have been committed over the last decade.

Southern Sudan is three months from a Jan. 9 independence vote that could see Africa's largest country break in two. The vote -- and the potential of a new north-south war because of it -- are the reason behind the rash of visits.

"If you knew a tsunami, or Katrina or a Haiti earthquake was coming, what would you do to save people?" Clooney said, according to a blog post by Ann Curry, a reporter for NBC who is accompanying Clooney.

Clooney spent the past week traveling to remote, conflict-prone areas of Sudan's south with John Prendergast, the founder of the Enough Project, an anti-genocide advocacy group.

One photo posted by Curry showed Clooney pointing over a field that Curry wrote was the site of a mass grave from 2008. That was in Abyei, a town that was largely burned to the ground after southern and northern armies clashed there, prompting an estimated 60,000 people to flee. The U.N. reported at the time that at least 140 people died.

Clooney, who declined a request for comment, also visited the town of Malakal, where elements of Sudan's northern and southern armies have clashed twice since the end of the 21-year north-south civil war in 2005.

The group of Americans also talked to villagers in Lul, an area where Human Rights Watch recently documented killings and rapes by southern soldiers against civilians who opposed the ruling Sudan People's Liberation Movement.

When the U.N. Security Council arrived Wednesday, school children lined the streets and hundreds of people at the airport chanted a greeting to America's U.N. ambassador, Susan Rice.

The group also chanted "Welcome, welcome ICC," a reference to the International Criminal Court that has indicted Sudan's president for war crimes in the western region of Darfur. Rice is known for her hardline views on how the U.S. should deal with the northern government, which is headed by President Omar al-Bashir.

The Security Council plans to meet with Southern Sudan President Salva Kiir but will not meet with al-Bashir. Members will also assess preparations for the Jan. 9 independence vote in Southern Sudan and a separate vote that day in the oil-rich region of Abyei.

Officials from the United States Holocaust Memorial Museum in Washington spent two weeks in Southern Sudan to assess the likelihood that mass violence will break out following the January vote. Mike Abramowitz, the director of genocide prevention at the museum, said "the next year is a very dangerous time for the civilians in Sudan."

"It is very hard to predict genocide. However, there are warning signs, many of which are present in Sudan," Abramowitz told The Associated Press last weekend. "Today there is an opportunity to avoid calamity, with sufficient international focus and pressure brought to bear on both southern and -- particularly -- northern leaders."

In a speech last week, Kiir said that he and his people have experienced "the anguish of war" and do not want to return to conflict.