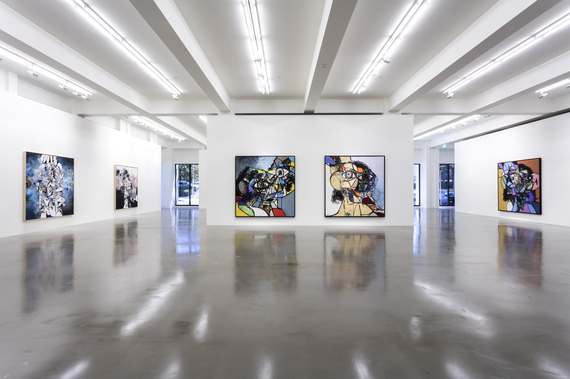 George Condo approaches painting like a great jazz musician reinterpreting popular melodies to express their own intense feelings. The distinctive visual tone of Condo's monumental paintings separate him from the artists he reinterprets - and for that matter, any other artist - in the same way that we can always recognize the distinctive sound of John Coltrane or Thelonious Monk or Miles Davis no matter what melody they happen to be improvising. This is a gift all great artists have: no matter what their subject or medium happens to be, in their hands it becomes a vehicle they drive with unmistakeable style, to take us on a thrilling ride with unexpected twists. Just as Shakespeare can transform well-known folktales or Coltrane can transform Broadway songs, Condo can transform iconic images from great masterpieces in his unmistakeable bizarre mental landscapes - that are really self-portraits. This is not a gift that can be taught or learned - because it comes from internal motivation - but it requires tremendous knowledge and skill to cultivate into great art.

Condo is both a skilled painter and musician with tremendous knowledge of art history and musical theory. He broke into the East Village art scene in the early 1980s when he was a founding member of the band Hi Sheriffs of Blue. His zany mixmaster skill for hybridizing European Old Master paintings with funky, American pop culture imagery is so powerful that he became instrumental in the international revival of painting - along with Jean-Michel Basquiat and Keith Haring - from the 1980s onward, influencing artists of his own generation and later generations.

His current show at Spruth Magers is his first solo show in Los Angeles since 1999 when he showed at Patrick Painter Gallery. Condo has shown with Monika Spruth in Cologne since 1984, when he had a huge impact on German painters. Later, Monika Spruth joined forces with Philomene Magers, and together they continue to expand their gallery with more international branches to cultivate the careers of their artists, many of whom emerged through their representation in the 1980s to become art stars. This 30-year history of loyalty and dedication between a major gallery and major artists they have nurtured is unique in a fickle art world.

The Condo exhibition of twelve new multifaceted portrait paintings at the beautiful new Los Angeles branch of Spruth Magers is a tour de force. A star studded opening with a VIP party afterwards merged the worlds of pop celebs like Lady Gaga, Jessica Chastian, and Leonardo Dicaprio with art world stars like John Baldessari, Barbara Kruger, and Michael Govan in an eclectic mix we associate with Condo. 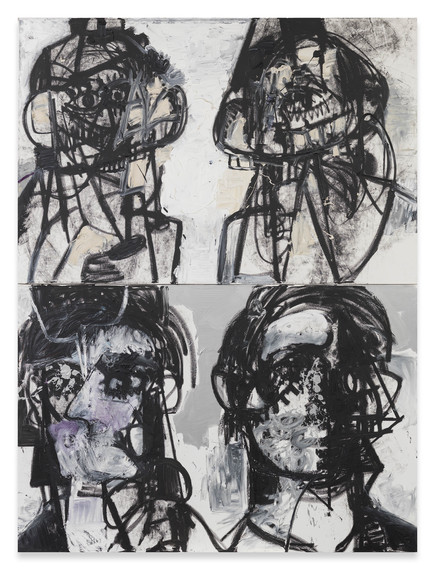 The new paintings made during the past two years have a more intensely personal emotional undercurrent because they were painted during a fight with throat cancer - which left him unable to speak for six weeks. Irrepressible Condo says this made him feel like a "cat with nine lives." The four multifaceted Self Portraits Facing Cancer, featuring a beautiful woman's face turning into a monkey, were painted when he did not know if his cancer was curable and evoke his "frenetic state dealing with the issue."

Condo explains that all these paintings are "driven by musical influence." We see iconic images referencing Picasso, Goya and Monet in these Condo paintings, deconstructed in much the same way the late Coltrane plays Rogers and Hammerstein or Thelonious Monk plays Ellington. They deconstruct well known melodies by "taking and copying popular melodies and turning them inside out" in the same vein as Condo arranges fragments of faces and geometrical forms. This virtuosity cannot be reduced to mere appropriation or imitation because it is so inventive, and this sets Condo's paintings apart.

Despite all the art theory taught in art schools, the reconstructive aspect of the postmodern approach is usually ignored and an artificial historical timeline is emphasized over inventiveness - even though as Jean Francois Lyotard argues, "a work can become modern only if it is first postmodern." True invention requires the deeper understanding Condo has of the way images are constructed and can be deconstructed - by being torn apart into different parts - and then reconstructed without depending on pre-established rules, definitions and categories. 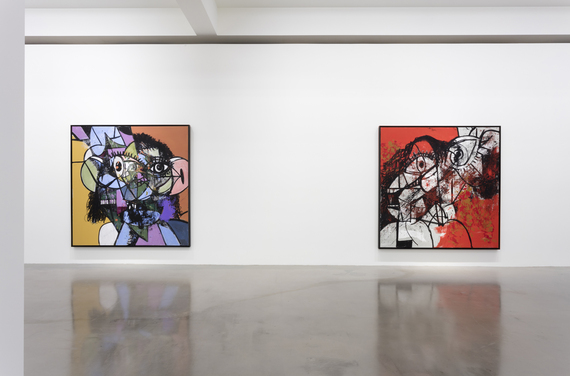 In 2015, Condo departed from his usual pastels and charcoal and "found a way through music to get into these new paintings." Listening to late Coltrane while he painted, Condo realized that "he was obliterating his own music" and that he could also "obliterate my own fingers in painting." He loves the intensity of Coltrane "digging into his own song" because "the parts are moving off each other independently and solos are so violent." Condo began to think of this deconstructive approach "like me playing Monet in a painting" looking at Monet's water and "seeing reflections of something completely different than what was in the painting" - like an Aztec totem from a different period.

Of course, painting exists in space and music exists in time, but Condo multitasks to mesh the two together - mixing different periods of time simultaneously within a frozen moment. He says the mind is abstract, because many thoughts and perceptions can cross our mind simultaneously.

Condo insists that "there is no real difference between abstract and figurative."
Looking closely at a small section in a traditional masterpiece, we can discover an exquisite abstraction; conversely, realism represents the artificial. Condo famously coined the phrase "Artificial Realism" because the notion of realism is so idealized it is an artifice. His paintings explode the historical separation between figuration and abstraction as yet another categorical artifice. 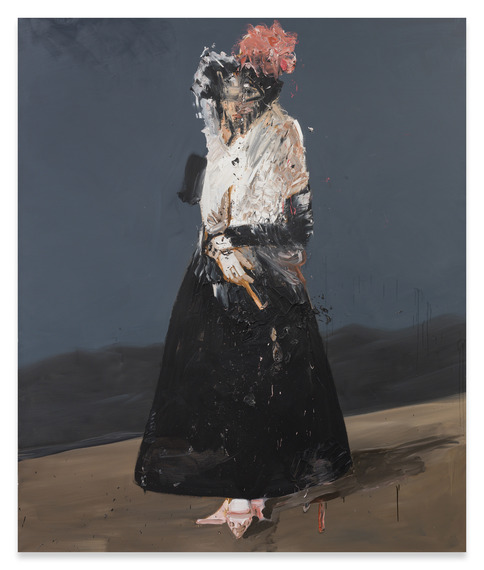 
In a series of three beautiful paintings, Impressions of Goya, referencing Goya's The Countess of Carpio, Marquesa de la Solana, the backgrounds are realistic, but the faces are abstract and her features are obliterated. Condo lived in Paris from 1985 to 1995 and worked at the Louvre with a certified copyist to learn Old Master techniques. He is so well versed in painting skills that he could paint these backgrounds in just a few hours. In the Diagonal Portrait series, he uses his signature hybridization technique in a tragicomic way to suggest the fragility of life.

Paradoxes replace shallow artifice throughout this exhibition aptly titled Entrance to the Void, because no matter what the subject is or what art history he references, we can feel the deeper emotions of the artist underneath filling the "void." If, as Walter Pater says, "all art constantly aspires towards the condition of music," then Condo uses a perfect vehicle for reconstructing deconstructions in his jazz-inspired mental landscapes. Just as a great jazz musician can turn a song which is not jazz into great jazz, Condo can turn a pop image which is not art into great art. Just as a great jazz musician can use a happy song as a vehicle to evoke their own sad emotions, Condo can use a masterpiece as a vehicle to evoke his own turbulent emotions. As Condo says, "I'm reconstructing what has been deconstructed like a cartoon character coming back to be the human character it once personified." 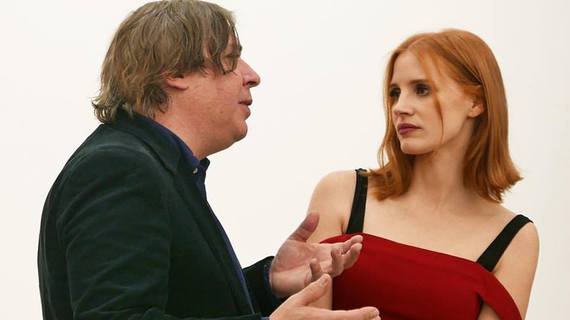