But just how much did the Condo go for, exactly? 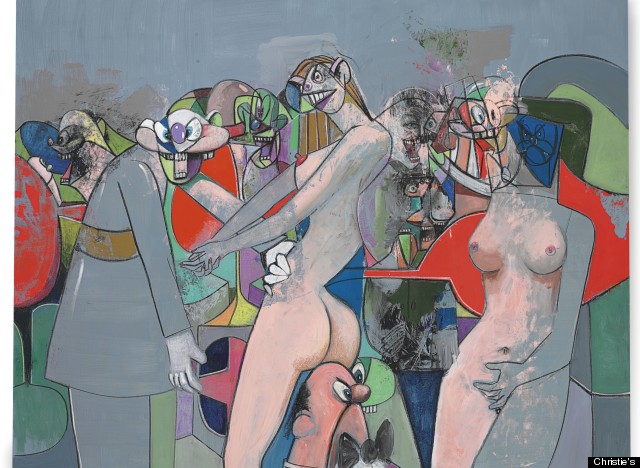 The chaotic array of supple nudes and garish, grabbing men sold for a whopping $1.3 million, Christie's announced today. The impressive price tag is the highest ever for the New York-based painter, who is still alive to see his smut-inspired masterpiece turn heads at the prestigious auction house.

Condo is not exactly a stranger to the glitzier side of art, however. His pieces currently hang in well-known permanent collections at the Museum of Modern Art and the Metropolitan Museum of Art in Manhattan, and past auctions at Christie's and elsewhere have breached the million dollar mark.

So, readers, what do you think of Condo's big Christie's hit? Are you a fan of "The Manhattan Strip Club" or would you rather spend your millions on, say, an actual condo? Let us know in the comments section.

To check out what's on the horizon at Christie's, scroll through the slideshow of the upcoming auction, "Pop Culture," below.

1 / 10
Madonna (Jean Paul Gaultier)
A couture corset in green silk with conical cups and beaded fringe, embroidered with candy stripes of opalescent sequins and peppermint bugle beads, with clustered sequins and beads at cups and hip line, fastening with a zip, labelled inside Jean Paul Gaultier, Paris, worn by Madonna during the Blond Ambition tour, 1990, including during her performances of Hanky Panky and Now I'm Following You, Olympic Stadium, Barcelona, 1 August, 1990 Catalogue Notes: After performing Sooner or Later in Barcelona, Madonna saucily removed a long black gown to reveal the shimmering corset beneath, which she wore throughout the next two songs before climbing the stairs to a raised platform and disappearing from view by stage lift at the close of Now I'm Following You. Estimate: £10,000-15,000
CHRISTIE'S IMAGES LTD. 2012