The New York subway system is a world of silent commuters who, despite riding in close proximity to other people, rarely make contact with their fellow travelers. It's an intriguing phenomenon that inspired Brooklyn-based artist George Ferrandi to test the limits of the subway's shared spaces in a site-specific performance piece titled "it felt like i knew you." 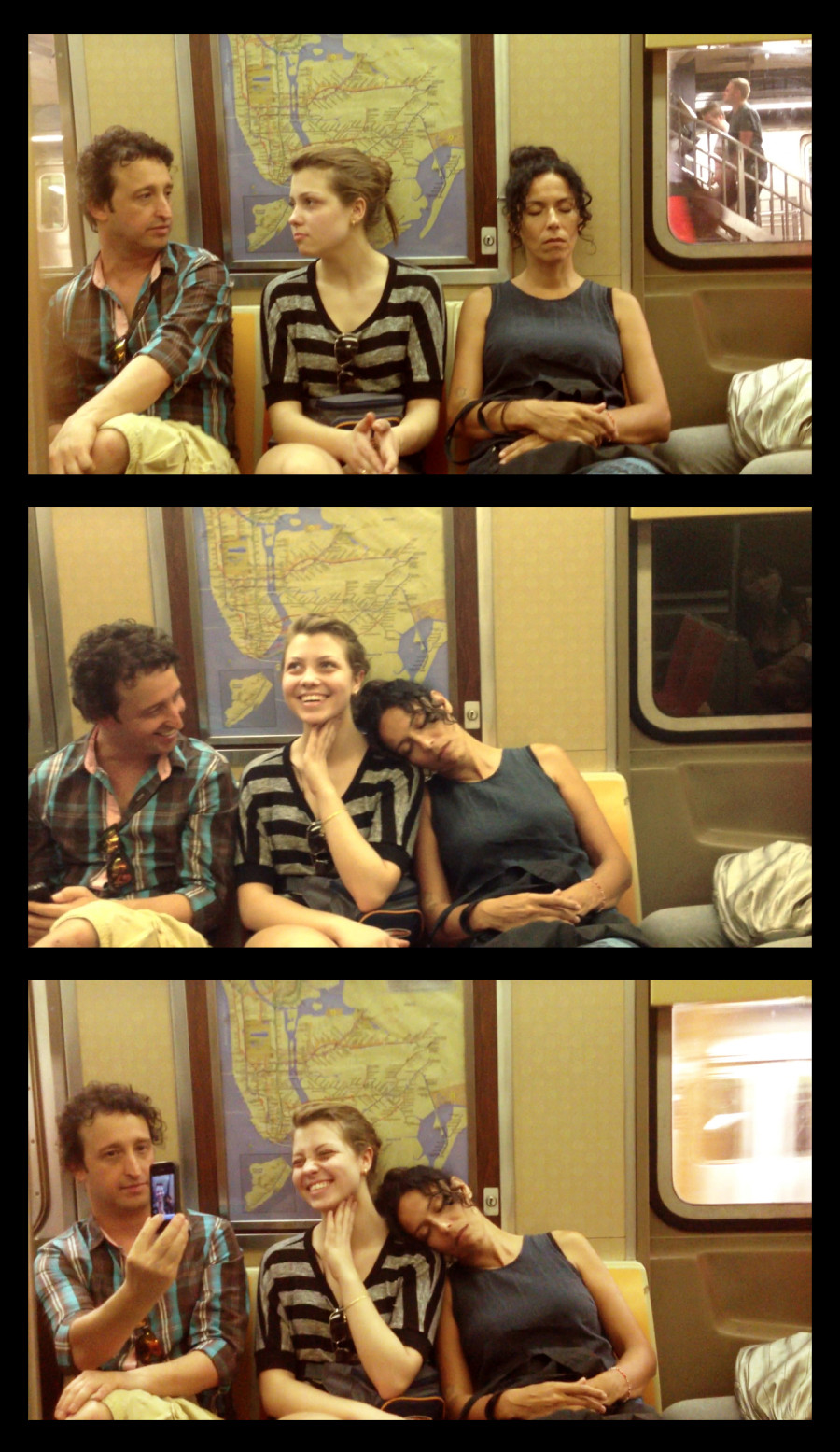 The project began in 2012, when Ferrandi decided to change or reshape the way she experienced a subway ride. She began by catching a ride on a crowded subway, during the evening rush hour, and nabbed a seat next to a fellow traveller. From there she embarked on a mental and emotional experiment of "resculpting" the space between her body and a stranger's, transforming what she considered a stiff and restricted space into a malleable, inviting distance by resting her head on that person's shoulder. Essentially, she slept on her unsuspecting partner, forcing both the artist and the stranger to confront their spatial and, often times, emotional relationships.

We chatted with Ferrandi to learn more about her subway art endeavors. Here's what she had to say about bold transgressions, connecting with strangers and the "Culture of Fear" in America.

Why the subway? Ostensibly, you could conduct a performance between strangers in a lot of places in New York City. What drew you to the trains?

It was a decision born of loneliness. In New York, it can be easy to feel “alone in a crowd,” but even more so on a crowded subway. We’re often exhausted from the day and crammed together, making physical contact with many people, but not actually interacting in a caring way with any of them. More than once, I found myself on a packed train with my head an inch from someone’s shoulder, wanting so much the comfort of that human connection, but recognizing how transgressive that tiny gesture of intimacy might be.

It’s a very specific and mysterious dynamic that I think is singular to, or at least magnified on the subway. On the bus, for example, it’s not so crowded, we face forward, we can look out the window. We are not removed from our lives or our living landscape in the way that we are underground, so people interact with each other more comfortably. The subway is primally scarier –- we are under the earth, after all -- so we feel more vulnerable and necessarily more protective of our bodies in that space. 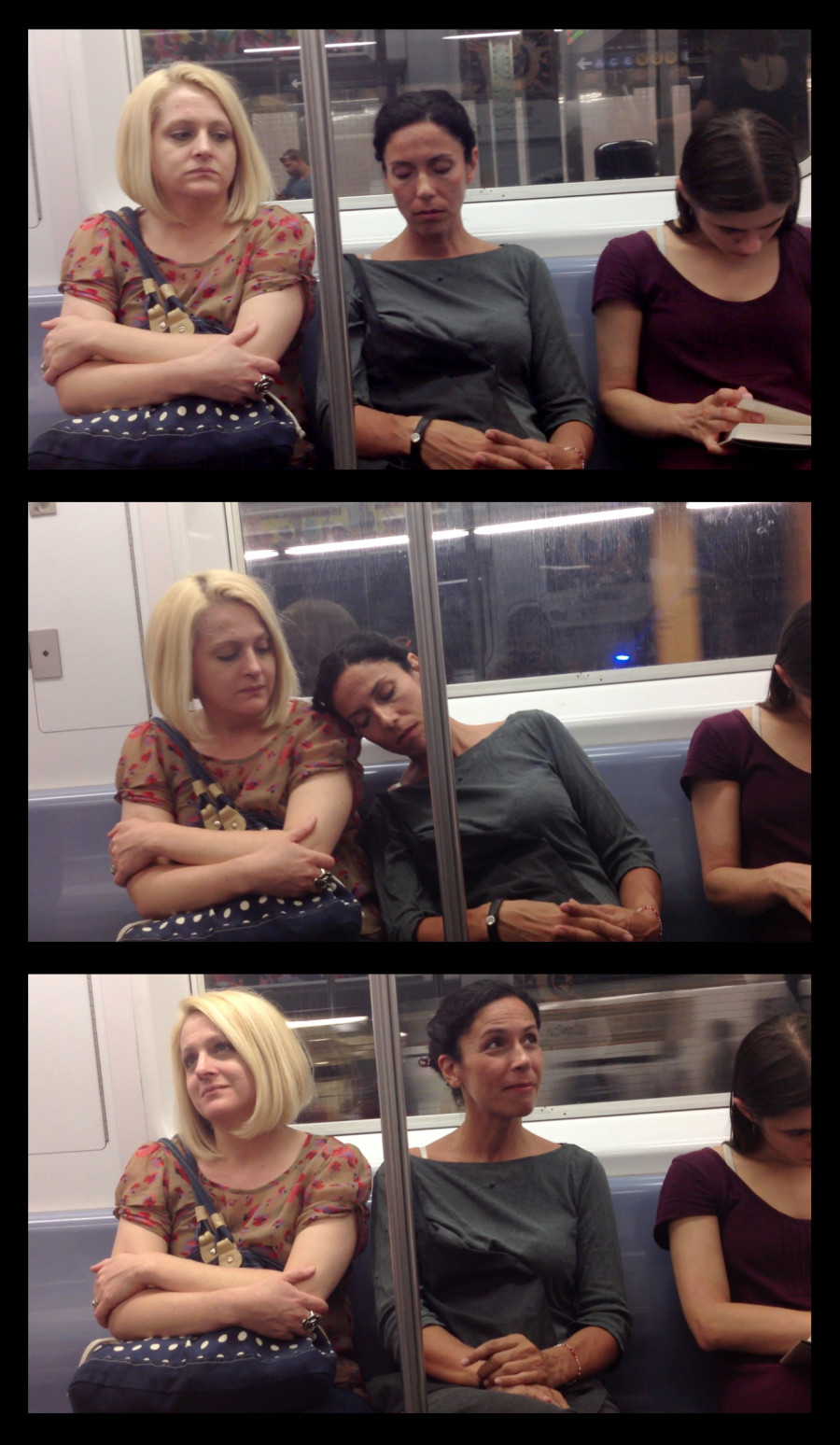 You've worked on projects between strangers before. What is it about the connective possibilities of strangers that inspires you?

I like to think that we’ve invented the characters that we are for the stories that we are living. Sometimes it takes an interaction with a stranger for us to expand our character’s limits. We can be braver or bolder or smarter or kinder or sexier with strangers, because we can reinvent ourselves in their eyes. I also think it’s easier for us to see the poetry in interactions between strangers – to recognize the broader metaphors latent in simple human exchanges.

In your opinion, what were the worst and best interactions you had with commuters?

Worst: I think because I’d experienced such tenderness doing this project, I became somehow protective of the space in subway cars and its potential as a location for generous behavior. This is the only explanation I have for why, weeks after I’d stopped doing the project, I scolded someone who was behaving less than generously on a very crowded train. Unfortunately, this person was volatile, and proceeded to punch me in the head.

Best: Before I actually started doing this project, I was just riding the train imagining it and wondering whether I could get up the nerve to essentially love and trust a stranger enough to lean my head on them. The elderly man next to me had dozed off and I started “practicing” –- focusing on mentally reshaping that space between us to a more familiar one. I didn’t physically move even the slightest bit; I just convinced myself I knew him and loved him, and relaxed my body next to him, as if he were already my friend. In his sleep, he reached for my hand and rested his hand on my leg – not in a sexually charged way, just in a ‘gentle human contact’ way. After riding like that for sometime, he started awake and was genuinely mortified and apologetic, explaining what was happening in his life that might have made him need that comfort. He got off the train still apologizing, but I knew that I had cleared the path for that familiarity just by softening the space between us, and that there was the potential to experience something powerful through this project.

How would you characterize the 'performance' aspect of the piece? And what makes this different, for you as an artist, from a casual encounter?

I come to performance art through sculpture and installation, so I think about the piece as a kind of "spatial intervention" more than a performance. I am trying to treat the space between me and this person next to me like a complex, invisible sculptural material -- made of social norms and personal fears and limited time and loneliness -- and reshape it. There is nothing casual about it for me; it makes my stomach hurt more than any stage performance or live presentation I've ever done. I recognize that this gesture will most likely be considered an imposition by this person, even if only for a second, and I dread that. But I also recognize how powerful the poetics of our interaction can be, and how potentially beautiful.

What, if anything, did you learn from the project?

For me, this piece taps into the mystery and fragility of how we relate and communicate to each other as human animals, full of signs secret even to ourselves. It’s given me a deeper understanding of the way New Yorkers evolve to maintain their privacy in public spaces. We carry our energy so closely. We’re often pressed up against each other on the train with a kind of “I wish I wasn’t touching you” energy that is invisible but respected. This is part of why so many people are touched by a photo of one man resting his head on the shoulder of another; it challenges a preconception about tenderness between strangers, especially in New York. And it offers a tiny counterpoint to the Culture of Fear being cultivated in America. 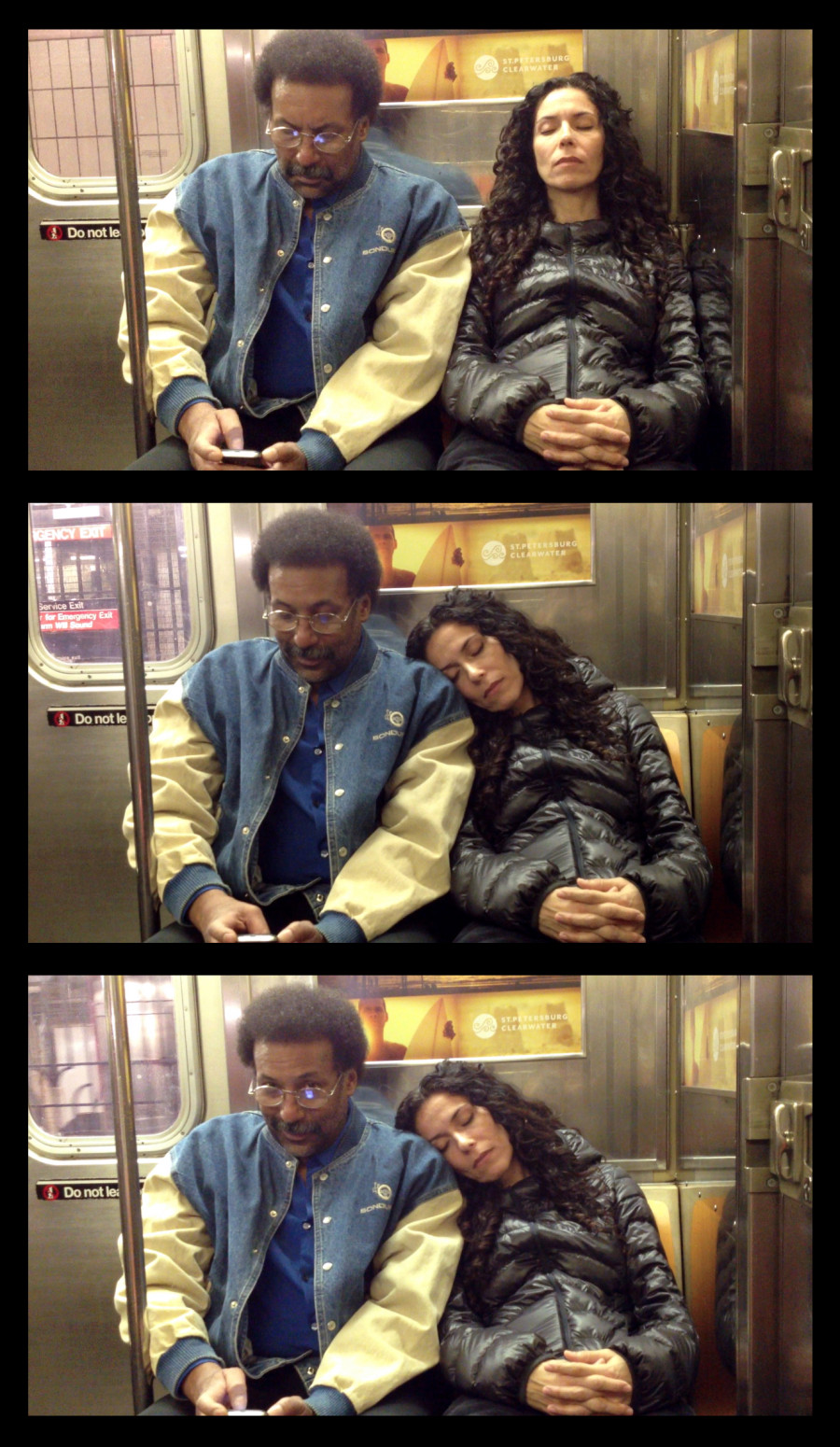 All images are stills are from iPhone videos shot by Angela Gilland. "It felt like i knew you..." will be on display in the exhibition "Guts" at the Abrons Art Center in NYC from December 6 to December 31, 2013.