Former President George Herbert Walker Bush, who navigated U.S. foreign policy as the Soviet Union collapsed, led an international coalition that quickly ousted the Iraqi military from Kuwait, but then lost his re-election bid amid a struggling economy, died Friday at the age of 94.

“Jeb, Neil, Marvin, Doro, and I are saddened to announce that after 94 remarkable years, our dear Dad has died,” former President George W. Bush ﻿said in a family statement.

“George H.W. Bush was a man of the highest character and the best dad a son or daughter could ask for,” he continued. “The entire Bush family is deeply grateful for 41′s life and love, for the compassion of those who have cared and prayed for Dad, and for the condolences of our friends and fellow citizens.”

Statement by the Office of George H. W. Bush on the passing of the 41st President of the United States of America this evening at 10:10pm CT at the age of 94. pic.twitter.com/XUPgha2aUW

Jeb Bush tweeted that his father was “the greatest human being that I will ever know.”

I already miss the greatest human being that I will ever know. Love you Dad!

Bush served as the 41st president from 1989 to 1993, following two terms as vice president under Ronald Reagan. His extensive public service record also included stints as director of the CIA, chairman of the Republican National Committee, ambassador to the United Nations and envoy to China, as well as a two-term member of the House of Representatives for a Houston-area district. He was a decorated World War II veteran.

His wife, former first lady Barbara Bush, died in April at the age of 92. Days later, he was hospitalized in Houston, his home for decades, with a blood infection. Bush was released two weeks later, but after traveling to his family compound in Kennebunkport, Maine, he was hospitalized again in May for low blood pressure and fatigue.

Bush was born on June 12, 1924, in Milton, Massachusetts, and raised in Greenwich, Connecticut. His father, Prescott Bush, was an investment banker and a Republican senator from Connecticut.

George H.W. Bush enlisted in the Navy in 1942 at age 18 and flew 58 combat missions, getting shot down once over the Pacific.

While still in the Navy, he married Barbara Pierce on Jan. 6, 1945. They had six children: George W., who went on to become the 43rd president; Robin, who died in infancy; John (or “Jeb”), who became governor of Florida and ran for the presidency in 2016; Neil; Marvin; and Dorothy.

The Bushes had been married for more than 73 years when Barbara died ― the longest of any presidential couple. Late last year, he passed fellow Republican Gerald Ford as the longest-lived U.S. president.

After the war, Bush attended Yale University on a fast-track program that allowed him to graduate early. He and his family moved to Texas, where he thrived in the oil industry. During his early years in the business, he and his family resided in West Texas.

Resettling his family to Houston in 1959, he set about energizing the Harris County Republican Party in what was then heavily Democratic Texas. He ran for the Senate and lost in 1964 and then ran for the House and won in 1966. It was a historic victory ― Bush was the first Republican sent to the House from Houston.

In 1970, President Richard Nixon helped persuade him to run for the Senate again. After Bush lost, Nixon appointed him ambassador to the U.N. In 1973, as the Watergate scandal increasingly threatened Nixon’s presidency, he named Bush to head the Republican National Committee. Bush was on the job ― and in the White House ― when Nixon resigned from office on Aug. 9, 1974.

Soon after, Bush stepped down from the RNC post. But Nixon’s successor, Ford, quickly picked him to head what was called the U.S. Liaison Office in China. Bush welcomed the change, writing in his diary that he and his wife wanted “a new adventure and a new challenge.” He called China “the place to be,” as that country’s communist regime and the U.S. were still in the early stages of engaging with one another and didn’t yet have official diplomatic relations.

After less than two years in Beijing, Bush was summoned back to Washington as Ford’s pick for CIA director. In January 1976, Bush took over an agency under a cloud ― congressional investigations of the CIA had revealed illegal and unauthorized activities. Bush was credited with restoring the agency’s morale.

Out of the CIA job after Ford lost the 1976 election to Democrat Jimmy Carter, Bush returned to Houston and the private sector. But he soon set his sights on the White House. Early in the 1980 campaign he emerged as the main threat to Reagan, the presumed frontrunner, and he famously lambasted his rival for promoting “voodoo economics.”

But by the spring it was clear Reagan would be the nominee; Bush ended his candidacy and endorsed the former California governor. Reagan ultimately chose Bush as his running mate, with the two serving eight years together.

Bush was a loyal lieutenant to Reagan, never making waves or diverting the spotlight from the first-in-command. His approach was exemplified when, barely two months into Reagan’s first term, the president was seriously wounded in an assassination attempt in Washington. Bush, who was in Texas, immediately arranged to fly back to the nation’s capital. When his plane landed, aides suggested he take a helicopter to the White House to project a reassuring image of the government still functioning. Bush dismissed the idea, saying, “Only the president lands on the South Lawn.”

As the 1988 presidential campaign began, Bush was viewed as the favorite for the GOP nomination. He stumbled out of the gate in the Iowa caucus, finishing third, but thumped his rivals in the New Hampshire primary and quickly wrapped up his party’s nod.

Like Reagan, Bush put off announcing a running mate until after the GOP convention had started. He then surprised most analysts by selecting a relative unknown ― then-Sen. Dan Quayle of Indiana, who had the distinction of being the first baby boomer on a White House ticket.

Political operative Lee Atwater served as Bush’s political strategist, and he targeted Michael Dukakis, the Democratic nominee in hard-hitting ― and often controversial ― ads. Some of the spots questioned the Democrat’s patriotism, others appealed to racism. As Julian Zelizer, a Princeton University history and public affairs professor, put it in a 2016 CNN column, Atwater “lowered the bar” for what “was permissible in presidential campaigns.”

Bush also did his part, deriding Dukakis as a “card-carrying member of the ACLU,” a dog-whistle to the days when Red-baiter Sen. Joe McCarthy (R-Wis.) recklessly labeled government officials and others as “card-carrying communists.”

It helped the GOP effort that Dukakis proved an uninspiring campaigner, and Bush easily won the presidency with 426 electoral votes to 111 for his rival.

During the campaign, Bush had famously promised: “Read my lips: no new taxes.” As president, that came back to haunt him when budget realities forced him to negotiate a 1990 deal with a Democratic-led Congress that did, in fact, raise taxes.

That same year, Bush signed into law the landmark Americans with Disabilities Act and a measure that increased legal immigration to the U.S. by 40 percent.

His other major domestic initiatives included a focus on voluntarism. He used a phrase that became identified with him ― “a thousand points of light” ― to refer to local efforts to solve community problems.

Europe underwent a sweeping reconfiguration during his term as Soviet satellite nations one by one shed the communist governments that had long ruled them. Most dramatically, the Berlin Wall came down as East and West Germany reunified. As this process played out, Bush carefully recalibrated U.S. foreign policy and the country’s dealings with Russia.

His sternest test came when Iraqi dictator Saddam Hussein invaded Kuwait in August 1990. The president set about forging a U.S.-led coalition to respond, signing up dozens of nations to provide varying degrees of assistance. Congress authorized the use of military force, and Operation Desert Storm launched in mid-January 1991. Within a matter of weeks, the Iraqi forces were routed from Kuwait. Many expected the coalition to march on and overthrow Saddam in Iraq, but Bush halted the offensive at the end of February, and Saddam stayed in power.

Ahead of the 1992 presidential election, many parts of the United States were struggling economically. Unemployment rose and Bush, who had always seemed more interested in international affairs, was slow to take action. He had also been hurt by his controversial pick of U.S. Circuit Judge Clarence Thomas for the Supreme Court the previous year. Despite sexual harassment claims made against Thomas by professor Anita Hill ― as well as questions about Thomas’ qualifications ― Bush refused to back down on the nomination.

The result: Democrat Bill Clinton swept into the White House with 370 electoral votes to Bush’s 168. Clinton benefited from a strong third-party run by businessman Ross Perot, whom many Republicans blamed for attracting votes that might otherwise have gone to Bush. The president had also been politically wounded by a primary challenge from conservative commentator and former Reagan communications director Patrick Buchanan.

After his electoral loss, Bush returned to Houston. Besides working to open the George Bush Presidential Library and Museum at Texas A&M University in College Station, he remained an active presence on the international scene throughout the 1990s and into the 2000s. He partnered with Clinton to raise money for the victims of the 2004 Indian Ocean tsunami and later Hurricane Katrina. He advised his two sons who entered politics. And he clearly reveled when his eldest son won the White House and then the prize that had eluded him ― a second term.

When he attended his son’s inauguration in January 2001, Bush became part of only the second father-son presidential duo in U.S. history ― the first having been John Adams and John Quincy Adams.

Bush had a major health setback in December 2012, when he suffered from complications stemming from a respiratory infection. But he bounced back, marking his 90th birthday by parachuting out of a helicopter. In recent years, he had used a wheelchair.

Late last year, as the Me Too movement gained momentum nationwide, allegations emerged that Bush had groped women in the past. Seven women came forward to say he did so during photo ops between 2003 and 2016, while another said he squeezed her inappropriately while they posed for a picture in 1992.

Carla Herreria contributed to this report.

This article has been updated with a statement from former President George W. Bush. 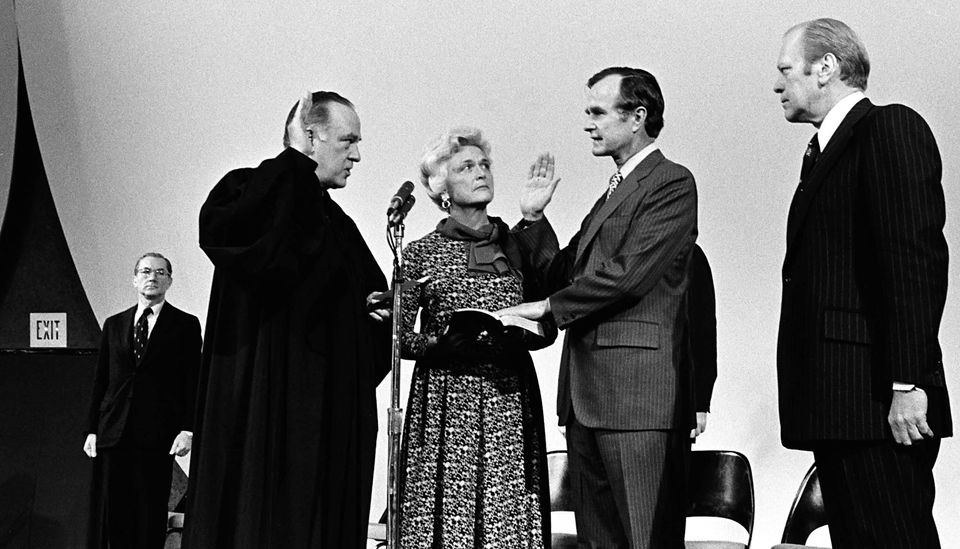