In cities across France yesterday, millions of people marched against terror. They held up pens and pencils, flags of different nations, giant posters that together created the thoughtful eyes of the slain cartoonists of Charlie Hebdo. Freedom is a universal longing, and freedom of press, freedom of information are the strongest weapons -- not tanks and nuclear bombs -- against terrorism and oppression.

The irreverent weekly's covers could clearly cross the line. It is highly recommended that you view them with the help of a French speaker who has followed the news in France for years. Taken out of context, some covers are cringe-inducing. For instance, the image of a naked woman running with a veil coming out of her bottom actually skewers "French fundamentalism": the so-called "burqa ban" that prohibits wearing veils covering the face but they're allowed to be worn inside; the naked woman found an extreme way to apply the ban. Here's a helpful link that provides context to another one of their more eyebrow-raising covers. A pro-immigrant, leftist rag, Charlie Hebdo seeks to shoot spitballs at the national conversation in France, and prides itself on exposing extremists of all varieties.

One legendary designer who is no stranger to controversy himself is George Lois, the creator of Esquire magazine's decade-defining covers in the 1960s. Last year, Lois was invited to speak in the land of his heritage -- Greece -- about his storied career. Recent events reminded me of his advice to use creativity to change the world, to be a cultural provocateur. "My concern has always been with creating images that catch people's eyes, penetrate their minds, warm their hearts and cause them to act," he says in his talk. 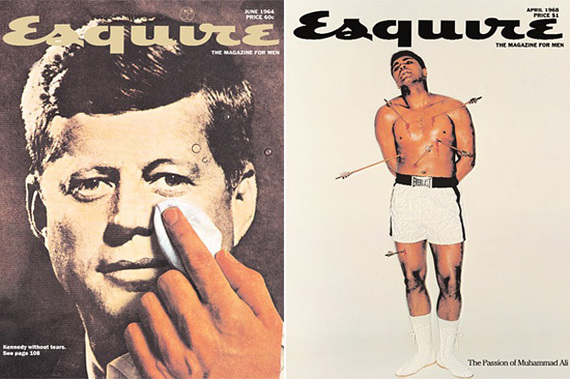 More than ever, we can't let fear stand in our way. There's too much at stake. We need to be vigilant in our work and our actions to take a stand on the issues that matter to us, and communicate those big ideas using the power of creativity. Lois, in this video, explains how, as he cautions: "Your mission is not to sedate, but to awaken."

For more on Lois's insights, check out his extremely useful book Damn Good Advice (For People with Talent!)