Word came out last week that George Michael, 48, was admitted to a Viennese hospital for severe pneumonia. (Though he has cancelled the remainder of the tour he was on, Mr. Michael is reportedly responding to treatment and slowly recovering.)

Ever heard of a group called Christians for a Moral America? Neither had I. Neither had anyone else -- until this weekend, when the group Tweeted these lovely messages: 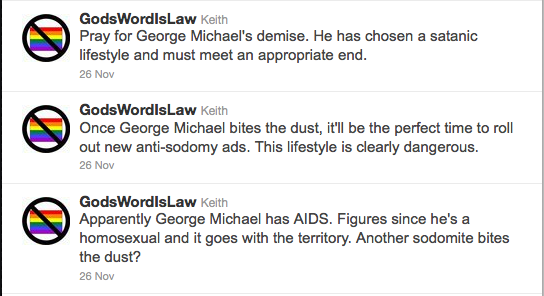 And now Christians for a Moral America will be known throughout the Internet.

And what is unlikely to matter during its 15-minutes of mud-spattered fame is that Christians for a Moral America consists entirely of one guy: fury-fueled Keith.

It won't matter that CFAMA's Facebook page has 117 fans. 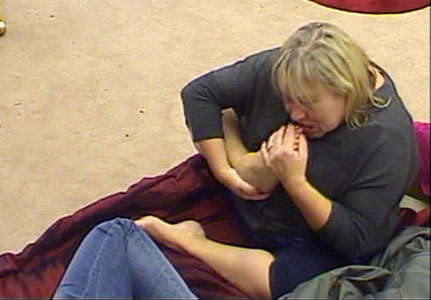 It won't matter how obvious it is that Keith wouldn't know Christianity from a boil on his ass. None of those sorts of things will matter, because so many people are so ready to believe the worst of Christians and Christianity, because so many have so much emotion invested in the idea that virtually all Christians are narrow-minded, hate-filled, fear-based, hypocritical misogynistic homophobes.

Meanwhile, in preparation of the print edition of "Wings on a Pig," I've been rereading the heartbreaking letters contained with it from gay and lesbian Christians.

And I've been reflecting on the inspiring phone conversation I had yesterday with Roger McClellan, and on the superb work he's doing with his Progressive Christian Alliance.

And I've been thinking of the man who wrote me just this morning: an anguished pastor torn between coming out and knowing that doing so would sever him from the church and congregation he has so faithfully served for 20 years.

For every one person like Keith I've ever known -- for every person who's ever fanatically endeavored to transmogrify the beautiful love of God into the horrible hatred of men -- I've known 200 who are quiety and humbly working, in Christ's name, to make the world a better, more loving place for all.

We want you to take issue with Keith. We're with you on that. We support that.

But please don't confuse him with us.