Two weeks ago, the Newark Museum opened two photography exhibitions: George Osodi's Royals and Regalia: Inside the Palaces of Nigeria's Monarchs and Hassan Hajjaj: My Rock Stars. In terms of the sitters and the artists' approach to photo-portraiture, the two shows could not be more different. Yet they have quite a bit in common, and it is this dynamic that makes the pairing done by the Museum's Senior Curator Christa Clarke such a compelling, thoroughly engrossing exhibit.

The Lagos-based Osodi has made a name in the international art scene for his documentary photography, which has focused on the human and environmental costs of natural resource exploration. Mixing photojournalism and documentary photography, Osodi's work on the Niger Delta, for instance, saw him taking great risks photographing armed resource-control gangs and the vast oil-spill wastelands in the region. But in Royals and Regalia, he presents powerful portraits of Nigerian royalty whose stunning regalia and palace decor speak equally about their economic status, the weight of tradition, survival of peoples, and the surprising layering of material cultures required for the production of the spectacle of real and symbolic power of these ancient and modern monarchies.

The diversity of regalia and décor seen in these photographs opens our eyes to the incredible number of autonomous ethnic and religious sovereignties in present-day Nigeria, many of them existing centuries before the late-nineteenth- and early-twentieth-century colonization by Britain. As with kingships in most areas of the world, these men and women, now largely without the political power they wielded in years past, retain tremendous symbolic power that is indexed in their very bodies, attire and courtly life. Given that royal portraits are usually highly formal, orchestrated affairs--and there are many of such here--it is the few deviations from this norm that are the real gems. Examples of these include the picture of the Orodje of Okpe and his retinue, his right hand partially shielding his face, leaving the viewer to wonder if this is part of his royal getup or he was caught in mid action; or the one of the Oni of Ife lounging on a couch deep in thought, as if unaware of the photographer's presence.

Osodi's subjects are the high and mighty, men and women who at least in days past had tremendous power, and who in the present are the guardians of tradition. Yet, the portraits reveal how much the performance of this traditional power depends on acquisition of luxury (or simply exotic) materials and goods from far beyond the respective kingdoms, even as they equally mask the fact that many of these rulers were once well-traveled chieftains of modern business and the professions. In these portraits then are multiple and complex stories and histories of not just the royals but also of their societies as they contend with ancestral legacies and the imperatives of global modernity.

Unlike Osodi, the UK-based, Moroccan Hajjaj is best known for his candy-palette, anti-ethnographic photos of Moroccan hipsters, images that are at once products of the artist's creative imagination, and studio portraits of real people. His portrait practice invokes mid-twentieth-century, pattern-intensive African photo-portrait styles of Mama Casset and Seydou Keita and the theatrical staging of Malick Sidibe and Samuel Fosso. But Hajjaj adds to this tradition the electric Kool-Aid colors of late 1960s American youth culture and Black Arts Movement. He in fact pushes the cliché about Africans' love of color and pattern--famously enshrined in "10 in Search of a Nation," the de facto aesthetic manifesto of the Chicago-based AfriCOBRA artist collective led by Jeff Donaldson--to its absurd limit.

Hajjaj combines his talent as a fashion/furniture designer and photographer, and the result is a kind of lively and optically stimulating portraiture in which the artist all but takes full control of the subjects' personalities, if these can be determined by their attire and surrounding. In his best known series, Kesh Angels, he showed women bike riders of Marrakesh in their mostly Hajjaj-designed, branded, colorful veils, accessories and cool attitudes, challenging prevailing ideas about female subjectivity in contemporary Moroccan and Islamic societies. While the subjects of Kesh Angels are supposedly anonymous denizens of Marrakesh streets, the rock stars featured in the Newark show are in fact musicians of various stripes and status that, according to the artist, have been of some influence in his life and work. As with his other shows, these portraits are part of a room installation complete a room divider (filled with collectible craft items), colorful furniture and a horizontal multipart screen showing the featured musicians in performance.

It is shows like these two that have made Newark my favorite museum. Go see for yourself!

George Osodi and Hassan Hajjaj at the Newark Museum
Gallery 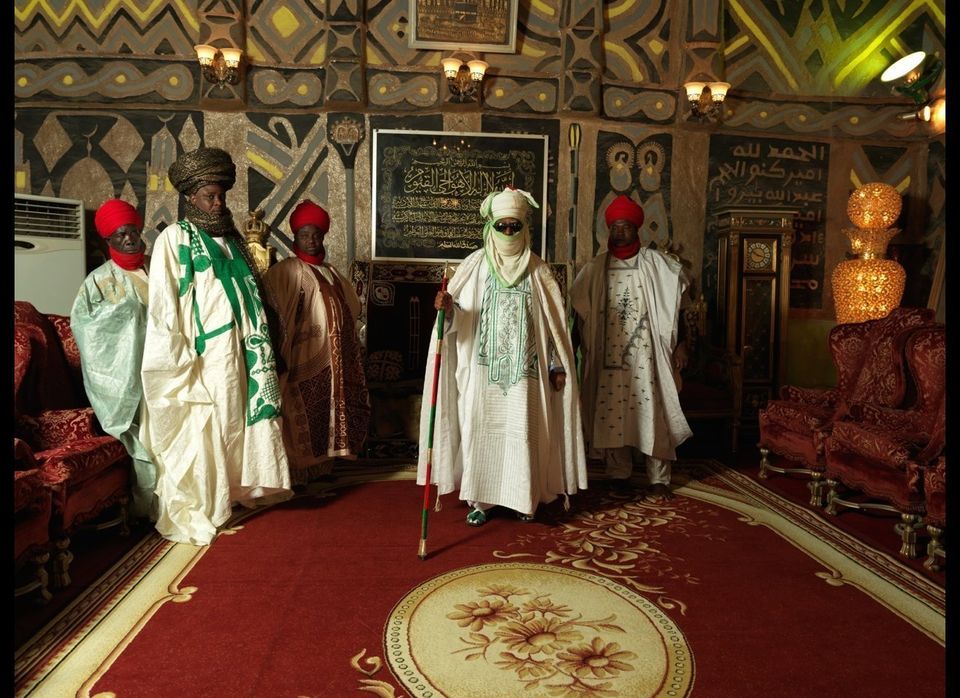