If you donated $20,000 to the Wild Spirit Wolf Sanctuary last month, you had a chance to be killed by "Game of Thrones" author George R.R. Martin in his newest novel, "The Winds of Winter."

The problem is not many people have $20K to blow, like one particular 13-year-old UK resident named Jack. But it's a good thing he didn't let that stop him.

Deciding to live like winter is coming, the boy donated what money he had and wrote Martin a heartfelt letter explaining the situation, reports Mashable. 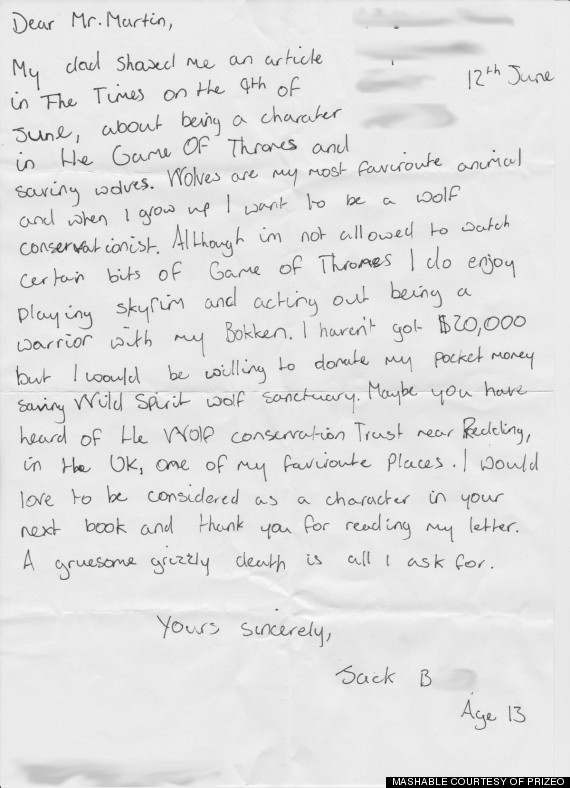 Wow, if that doesn't hit you right in the heart tree, nothing will.

Then, proving that he is the coolest guy in the Seven Kingdoms, Martin wrote back the sweetest response.

Thank you so much for your heartfelt, touching note.

I’ve heard that you donated all your £153 pocket money savings to my Prizeo fundraiser on behalf of the Wild Spirit Wolf Sanctuary. I cannot tell you how much that moved me. It pleases me no end to know that my novels, and the TV series based on them, have inspired readers as young as yourself to rally to the support of these majestic and too often stigmatized animals

Alas, I cannot promise you a grisly death in THE WIND OF WINTER. Those spots have already been filled by some very generous donors, and there’s a limit to how many people even I can kill.

However, inspired by your example, my friends at Prizeo and I would love to follow your lead with a $10,000 in your name to the UK Wolf Conservation Trust. That’s a wonderful organization that I've heard much about, and they are lucky to count people like you as supporters.

I wish you the best of luck in your future career as a wolf conservationist, and hope that you inspire many others to follow your lead.

Okay, so the kid isn't really going to die in the books, but a $10,000 donation is still pretty cool. And for an author who's known for killing off everyone's favorite characters left and right, it's nice to see him write at least one happily ever after.

Now, if only we could do something about that Red Wedding.

George R.R. Martin's Response To A Fan's Letter Is The Happiest Ending He Ever Wrote
"Game Of Thrones"