The "Game of Thrones" Season 4 finale was full of shocking twists and surprises, but the most mind blowing of all was Tyrion's epic scene in the Tower of the Hand.

While escaping from prison with the help of Jaime and Varys, the Imp takes a detour to the Tower, strangles Shae, who he finds naked in his father's bed, and then shoots Tywin with a crossbow while he's on the potty, forever making him king of the porcelain throne.

It's definitely a lot to take in, but this Maisie Williams (Arya) Instagram pic pretty much sums it up: 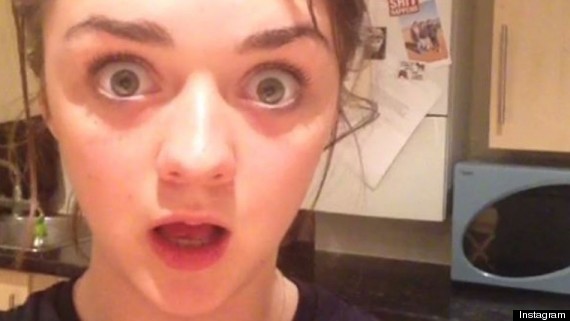 For everyone who was left with their jaw dropped, George R.R. Martin opened up to Entertainment Weekly about the crazy scene, explaining that Tyrion just couldn't take it any more.

One major difference between the books and the show that should be noted is that before entering the Tower of the Hand, Tyrion learns the truth about a scarring event from his past. Jaime reveals that Tyrion's first wife, who he thought had been a whore, was actually just a lowborn girl and Tywin and Jaime had lied to him about it. (Stuff like this is probably why "Punk'd" got canceled.) Tywin also made Tyrion watch as she got raped by Lannister guards. (Whoa! Not even Ashton Kutcher would touch that one.)

Additionally in the book, Tyrion lies to Jaime that he killed Joffrey before going on his murderous rampage.

Martin explained, "He’s so hurt that he wants to hurt other people."

As far as the murders in the show, Martin says these were two different kinds of events. The author calls Shae's murder "the blackest deed that [Tyrion's] ever done." It was "a great crime of his soul" because he could have stopped at any time, but he felt so betrayed that he waited until it was finally done.

Tywin, on the other hand, may have to put part of the blame for his death on himself (you know, besides the fact that he had Tyrion's wife raped in front of him). The truth is that Tyrion never went into the Tower with the intention to kill his Father. Martin says that as a boy he was always taught to "follow through on threats," and when Tywin continues to call Shae a "whore" despite Tyrion's objections, he had no choice but to deliver a Father's Day present that would really hit his dad in the heart (or the stomach, rather).

Martin also hinted at another twist to come, saying Varys may have played a bigger role in these events than we think.

All in all, "The Children" will go down as one of the best episodes of the season, but if you think the craziest stuff is all behind us, you know nothing, Jon Snow.