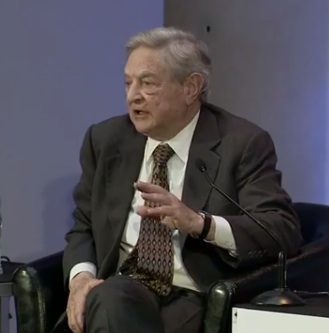 George Soros has gone to Berlin to tell the Germans that their policies are leading to the disintegration of not just the Euro, but Europe itself.

Yesterday in a panel on the "Future of Europe" at a conference organized by the Institute for New Economic Thinking, Soros said:

The Euro has really broken down. It has sprung defects, some of which could have been anticipated and some were anticipated. But some actually couldn't. Effectively, heavily indebted countries [in Europe] have ended up in the position of a third world country that is heavily indebted in a foreign currency. And that is only one of the unanticipated results of how things worked out [with the Euro].

Bottom line. Soros thinks Europe is over unless Germany immediately changes course and develops a policy framework that is far more flexible and pragmatic than it is forcing now.

Here is the clip of George Soros on the "Future of Europe" panel:

More on the INET meeting in Berlin soon.

-- Steve Clemons is Washington Editor at Large at The Atlantic, where this post first appeared. Clemons can be followed on Twitter at @SCClemons