UPDATE, 6:30pm: The New York Observer's Foster Kamer reports that earlier this afternoon, Reuters, in response to the hotly criticized piece discussed in detail below, went ahead and ran an entirely new story on the subject under the same byline. Only this new story completely switched the premise of the old one. As Kamer notes: "Reuters changed the story. Not 'corrected,' or 'published a rebuttal to the original reporting,' but 'changed the story.'"

Kamer includes screengrabs, which you can view here. The new version of the story can be read, here, while the old one remains online here.

The most significant change has been to the article's lead paragraph. Before the change, it read:

Anti-Wall Street protesters say the rich are getting richer while average Americans suffer, but the group that started it all may have benefited indirectly from the largesse of one of the world's richest men.

George Soros isn't a financial backer of the Wall Street protests, despite speculation by critics including radio host Rush Limbaugh that the billionaire investor has helped fuel the anti-capitalist movement.

The new story makes no mention of the fact that it's been changed -- no editor's note, no correction, no nothing. I anticipate that this will change. For the moment, however, they've just taken the original story, inverted its original premise entirely to create a new story, and are now pretending that this is how it was intended to read all along.

As Salon's Alex Pareene puts it: "Haha is this Reuters' first week on the internet?"

It was only natural that someone would come along at some point, size up the ongoing Occupy Wall Street demonstrations, and commence a paranoiac aria titled, "OMG! GEORGE SOROS!" But I'm a little surprised that this "someone" has turned out to be two Reuters reporters, who attempt today to determine "Who's behind the Wall St. protests?" The piece basically gets over on the fact that the reporters, Mark Egan and Michelle Nichols, have a less conventional definition of "deductive reasoning" than the one typically deployed by journalists.

Okay, let's sample these wares, shall we?

Like the protesters, Soros is no fan of the 2008 bank bailouts and subsequent government purchase of the toxic sub-prime mortgage assets they amassed in the property bubble.

The protesters say the Wall Street bank bailouts in 2008 left banks enjoying huge profits while average Americans suffered under high unemployment and job insecurity with little help from Washington. They contend that the richest 1 percent of Americans have amassed vast fortunes while being taxed at a lower rate than most people.

Well, color me astounded! You mean that there exists a burgeoning mass of people who have made the utterly quotidian observation that the "the Wall Street bank bailouts in 2008 left banks enjoying huge profits while average Americans suffered under high unemployment and job insecurity with little help from Washington?" And that these people are not "fans" of this? Clearly they wouldn't feel that way if George Soros hadn't happened to have made the same observation and arrived at the same sentiment.

But you'll forgive me if I don't find this compelling. The public sentiment has long run against the Wall Street bailouts. And, more recently, it's been running against Wall Street in general. As Lindsay A. Owens reported a week ago, the public's "[a]nimosity toward Wall Street is at its highest level in at least 40 years." And in a Washington Post/ABC News poll that was published just yesterday, 70% of respondents had an unfavorable opinion of Wall Street financial institutions. When those responses were broken down along party lines, the lack of favor remained evident by solid majorities.

As John Aravosis puts it:

Holy cow! You mean the protesters aren't big fans of the Wall Street bailout and George Soros also isn't a fan? That kind of deductive logic deserves a Pulitzer.

So this shared-sentiment angle isn't too remarkable, Reuters. What else you got? Well, Egan and Nichols do include this quote: "George Soros is behind this." And that would command my attention if it weren't for the fact that it comes from Rush Limbaugh, who thinks Soros is behind everything that's ever ailed him. Rush Limbaugh probably thinks that George Soros is responsible for making Oxycontin so compulsively delicious.

Eventually -- and I mean, after paragraphs of mountain-grown piffle! -- the reporters gamely attempt some sort of "follow the money" exercise:

According to disclosure documents from 2007-2009, Soros' Open Society gave grants of $3.5 million to the Tides Center, a San Francisco-based group that acts almost like a clearing house for other donors, directing their contributions to liberal non-profit groups. Among others the Tides Center has partnered with are the Ford Foundation and the Gates Foundation.

Aides to Soros say any connection is tenuous and that Soros has never heard of Adbusters. Soros himself declined comment.

Okay, so, two years ago, Open Society gave some money to the Tides Foundation, who in turn gave a smaller amount of money to the magazine published by Adbusters, which Reuters describes as "an anti-capitalist group in Canada." Then two years later, Adbusters "brainstormed" up the "Occupy Wall Street" campaign. Just as George Soros conceived of it, I guess! The folks at Adbusters aren't particularly willing to credit Soros for this exchange of money, telling Reuters that they "wish he would give Adbusters some money, we sorely need it ... He's never given us a penny."

But there's no reason to dispute the fact that money went from Soros to Tides and then on to Adbusters. As anyone familiar with the way taxpayer money flowed via the Wall Street bailouts to AIG counterparties with no scrutiny or accounting would tell you, "Money is fungible."

AdBusters has a reported circulation of 120,000 and a cover price of $7.95. If an issue of AdBusters sells 1,090 copies, the gross profit is equivalent to a year of funding from Tides. More perspective: Americans for Prosperity, the umbrella Tea Party group founded and partly funded by David Koch, had a 2010 budget of $40 million.

I'd add that in Reuters' own reporting, they note that "more than $75,000" has been pledged to Occupy Wall Street through Kickstarter. I am assuming that they are referring to the money raised to produce the "Occupy Wall Street Journal," which was raised by 1,696 backers (only one of whom contributed more than $1,000). If I'm not mistaken, the $75,000 raised on Kickstarter in the past few weeks is almost three times as much money as Tides provided Adbusters between 2007 and 2009. This would tend to lead one to conclude that the answer to the question, "who's behind the Occupy Wall Street protests?" is, "the actual people doing the actual protesting."

At any rate, if this Reuters story isn't sitting atop the Drudge Report by the end of the day, this entire quasi-journalistic exercise will be deemed a failure.

UPDATE: I'm getting the impression that Egan and Nichols have pretty much embarrassed their colleagues. Here's how Reuters' Anthony DeRosa and Felix Salmon reacted to this over Twitter: 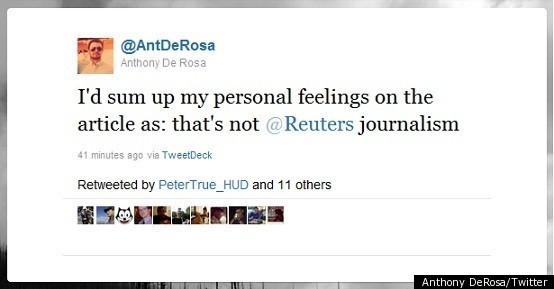 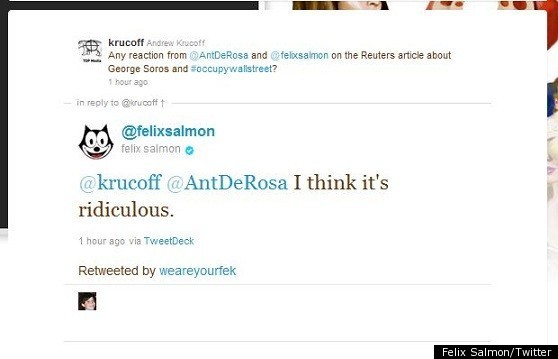 For a roundup of media reaction to this story, here's Foster Kamer of the New York Observer.