Researchers recently uncovered a startling phenomenon -- a set of teardrop-shaped lakes in Antarctica that mysteriously move, jogging along at a pace as fast as 5 feet (1.5 meters) per day.

The lakes sit atop the George VI ice shelf -- a massive floating plain of ice larger than Vermont, composed of the mingled fronts of glaciers that flow off the edge of the continent and rest on the ocean.

Glaciologist Doug MacAyeal at the University of Chicago, and student researcher C.H. LaBarbera, noticed the traveling bodies of water while studying satellite images of 11 ice shelf lakes captured between 2001 and 2010.

"We compiled 10 images for the last 10 years and literally made a movie," MacAyeal told OurAmazingPlanet, "and as we looked at the loop, the lakes moved up the coast."

The discovery was something of shock, he said. "We walked into our research with an expectation that has been completely defied by what we observed."

MacAyeal said he had expected the lakes to move over time, but only because the ice shelf underneath them also moves, as ice flows from the interior of the continent out to sea.

Instead, "we found a subset of lakes that defied this in a spectacularly curious and interesting way, by moving parallel to a coastline of the George VI ice shelf," MacAyeal said. 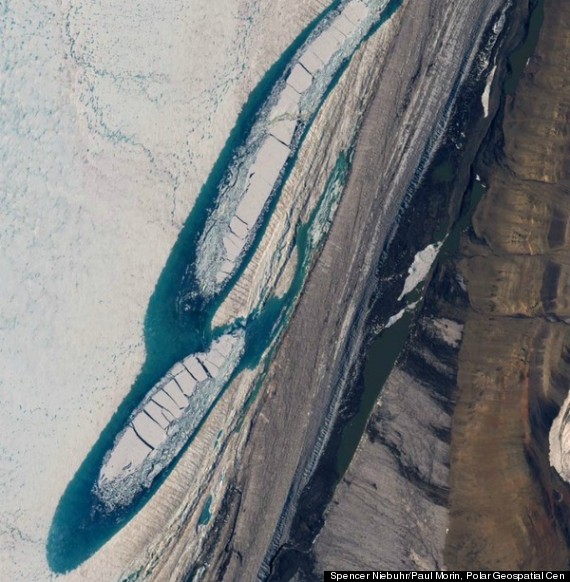 It turns out the mechanism at work is something that nearly everyone would recognize from TV or the breakfast table -- that gooey, back-and-forth folding action often shown in ads for chocolate or maple syrup, and known in scientific parlance as viscous buckling.

But in this case, the chocolate or maple syrup is the ice shelf, and it's "pouring" horizontally and smashing into and oozing around nearby Alexander Island, enfolding the large island in an icy embrace. As the ice scrunches around the island, it propels the lakes along. It's a geographical arrangement that makes the George VI ("Yes, the one from 'The King's Speech,'" MacAyeal said) an oddity among its ice shelf neighbors, which typically flow unimpeded out into the open ocean.

In recent years, these floating ice plateaus have become the subject of a flurry of research because of their apparent link to climate change and rising seas. Scientists have discovered that ice shelves function as massive doorstops for glaciers; when ice shelves weaken or collapse, they allow glaciers to slide into the ocean more quickly, which, in turn, raises global sea levels.

In the last decade, increasingly sharp-eyed satellites have captured several catastrophic ice shelf collapses in grim detail. Nearly all of these collapses have occurred along the Antarctic Peninsula, home to the George VI ice shelf and one of the most swiftly warming places on the planet.

Changes in wind patterns have raised temperatures on the peninsula by 4 or 4.5 degrees Fahrenheit ( 2 or 2.5 degrees Celsius) in the last 50 years, and the warming trend appears to be striding ever southward, consuming more and more of the region. 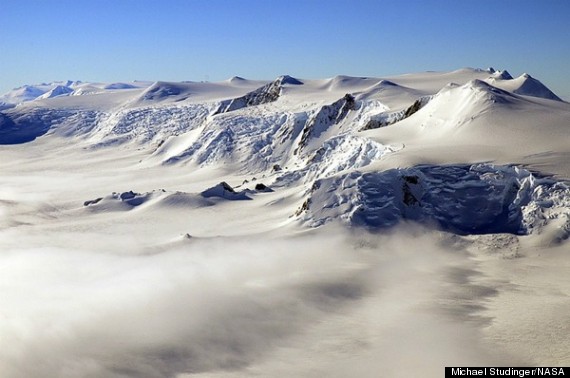 Holt said that data show the ice shelf is thinning and fracturing somewhat along its southern front, but, according to MacAyeal, it appears that the ice shelf's cozy relationship with Alexander Island is keeping it healthier than some of its neighbors, insulating it from the more extreme effects of climate change. (The island likely acts as a buffer against warming ocean water, and also acts as a sawhorse, propping up the edge of the ice shelf.)

And because its lakes are the result of strange weather patterns created by mountains on Alexander Island (instead of global warming), the ice shelf gives scientists a natural petri dish to study how ice shelf lakes alter the structure of ice shelves in general.

"We're interested in surface lakes on ice shelves because they're the precursor of ice shelf collapse," MacAyeal said. "This ice shelf gives us longstanding lakes for reasons other than climate change, and with consequences that aren't going to kill the beast we're studying, so can we look at these lakes to see what's going on."

Yet even with its island protector, it could be that the George VI ice shelf won't be entirely immune to the effects of warming. "It's in that region where we're expecting to see changes over the next 10 or 20 years," Holt said.

In the meantime, MacAyeal said, the ice shelf could offer clues to the physics behind the plight of more vulnerable ice shelves. "We expect that to be a harder problem," he said, "but we'll get closer to the real ultimate goal, which is to understand why lakes and ice shelf instability are correlated."