Georgia's Governor Nathan Deal has to determine whether HB 859, the "Campus Carry" law passed by the Georgia legislature, should be signed. While I'm sure the authors of the bill had good intentions, it violates nearly every Republican principle on the books.

Reading HB 859, it says nothing about how any additional security officers will be provided to Georgia college campuses to enforce the age and event restrictions the bill mandates. So either the bill won't be enforced, or such security guards must be provided. And given that Georgia requires balancing the budget, expect a tax increase to pay for this campus law enforcement, which won't be cheap (and we haven't even talked insurance yet, or lawsuit liability). Expect your tax bill go up if this bill is signed into law.

Last fall, a student at Umpqua Community College gunned down nine fellow students and a professor before taking his own life. Political candidates Donald Trump, Mike Huckabee and Carly Fiorina blamed UCC for being a "gun-free zone," but that's not true. Oregon is one of seven states with Campus Carry rules, as noted by the National Conference of State Legislatures. The UCC did try to limit guns on campus, but the state courts stopped their attempts. So no, Trump, Huckabee, Fiorina and other presidential candidates aren't telling you the truth about Campus Carry. Research it for yourself, if you don't believe me.

Oregon's laws are as confusing as HB 859's provisions, which ban guns at athletic events, but how about tailgate parties, for example? It's like allowing guns in bars, as long as you don't have them on the patio, in the bathroom, or within 15 feet of the band. As a result, provisions in Georgia's law are difficult to enforce. 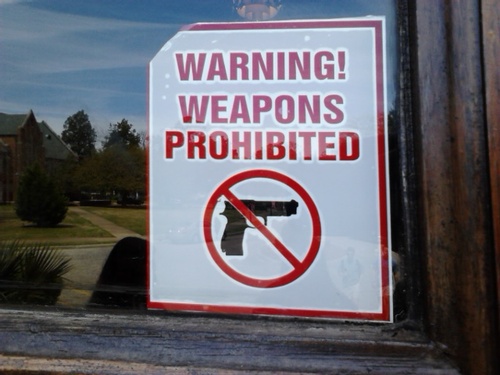 In the wake of the Newtown shooting, the NRA and Republicans were quick to blame mental health for the Connecticut tragedy. Well, Georgia's Campus Carry never mentions mental health. In fact, some backing it tried to make it harder for Georgia courts to deny someone a gun based on mental health concerns not long ago. Even Obama's post-Newtown shooting proposals covered mental health better than this.

4) Georgia Campus Carry has no provisions for training.

The NRA and Republicans are all about gun safety, in the form of training. Yet there's nothing in the bill that requires those carrying a weapon on campus to have any sort of training (like HB 331 or HB 778). In fact, bills requiring training aren't getting any traction in the Georgia legislature.

A frequent argument by Republicans is that the existing gun laws and requirements should be enforced before new ones are made. Yet a bill by some Campus Carry supporters calls for the elimination of Georgia gun licenses, making them optional as well. And that's a scenario that should have all gun owners, not just Republicans, concerned.