Georgia state lawmakers are discriminating against immigrants through proposed legislation SB 67 that would restrict driver's license exams to be issued in English only. Currently the state offers the exam in 13 different languages but according to State Senator Jack Murphy, the chief proponent of the legislation, restricting the privilege to English-only drivers is a matter of safety. The senator believes that foreign language drivers pose a danger because they cannot read English language road signs. If Georgia offered driving tests only in English it would eliminate the perceived problem.

I say perceived because I could find no evidence that non-English speakers are a danger. Even in legislative hearings, as the bill was being debated, there was no testimony by road safety experts to prove that English-only drivers would improve safety. Not only was there no evidence the bill would make Georgia roads safer, the proposed bill offers driver's licenses for illiterate drivers. Fifteen percent of driver's licenses in Georgia are issued to people who cannot read at all. According to Senator Murphy, they qualify as safer drivers than the non-English literate immigrants. If the bill passes, U.S. citizens and legal residents who are not proficient in English will be prohibited from driving.

I tried to speak with Senator Murphy but was told he was not available until after the legislative session. I tried to speak with a representative from the Governor's office, Sonny Perdue, but received no response. I called the Chamber of Commerce of the State of Georgia to see what their position might be -- no response. The immigrant community, civil rights leaders and religious community vehemently oppose the restrictive bill. Jerry Gonzalez, executive director of Georgia Association of Latino Elected Officials (GALEO) calls the measure xenophobic and anti-immigrant. "There is no evidence that this measure will make roads safer. It is just an attempt to target immigrants, legal or not." The bill will affect an estimated 60,000 immigrant drivers. People who need their car for employment or transporting their children will have to use an inadequate public transit system or find alternate transportation. Non-English speakers who have a history of safe driving will no longer be permitted to operate a motor vehicle. Bill Nigut, Southeast Regional director of the Anti-Defamation League (ADL) says, "The economic harm of an English-only policy could have a devastating impact. Many will not be able to obtain a driver's license and will be stranded and unable to go to work."

If there is no substantiated or legitimate basis for the restrictive legislation one can only draw conclusions that non-English speakers are not welcome in the state of Georgia. Some speculate that the bill is aimed at the growing Spanish speaking population and undocumented immigrants. It is a harsh, punitive measure that will not curb illegal immigration but will probably score political points.

The vast majority of non-English speakers in the state of Georgia were most likely marginalized in their home countries, fled oppression, escaped poverty, survived war or were searching for better opportunities. They have run into the arms of America to be embraced by the nation of immigrants where all are considered equal and all have a fair chance at stability and success. To require an English-only driver's license exam is literally forcing immigrants to sit at the back of the bus. They are not safe enough, smart enough or worthy enough for the simple liberty of driving a car. I wonder what any of us would feel like if our driving privileges were stripped for no legitimate reason. 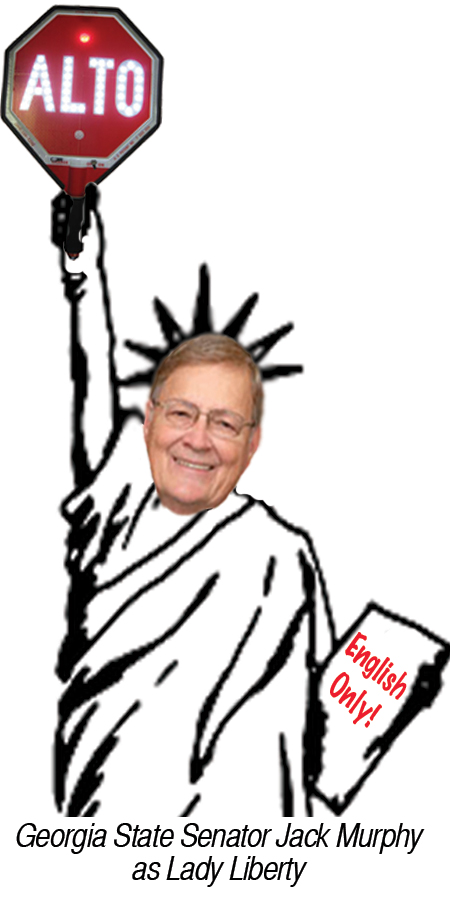 The Georgia state legislature has made a scapegoat of immigrants for some cheap political gain. To further oppress and restrict the mobility of an already vulnerable population is cowardice and shameful. What Senator Murphy and his supporters do not understand is that immigrants are a vital part of what makes this country strong and unique. America was never intended to be a home just for the white, rich and English speakers. If the Statue of Liberty were somehow moved to Georgia, the powerful ode to immigrants by Emma Lazarus would have to be modified to accommodate the bigotry of the Georgia State Legislature:

"Give me your wealthy, I shun the immigrant poor,
Your huddled politicians yearning to be free (of Spanish),
The wretched refusal of your driving test score.
Send these, the homeless, tempest-tost away from me
I turn off my lamp beside the closed golden door."

I apologize to Emma Lazarus for my unskilled poetry. Please read the real poem here and see if the State of Georgia is living up to her promise.