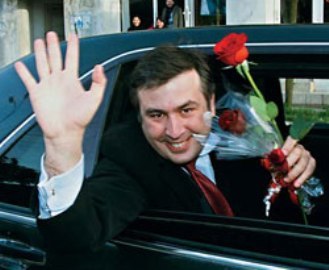 Georgia declared independence from the Soviet Union in April 1991; Eduard Shevardnadze was chosen as Georgia's second president in 1995. Several bloody conflicts wracked the young country early on, such as a stunning military defeat by a separatist movement in the region of Abkhazia and ethnic violence in the region of South Ossetia.

During this time, Shevardnadze's government faced many charges of corruption and steadily declined in support and popularity. The instability during Shevardnadze's presidency led to poverty and economic stagnation, which, coupled frustration with the government, led to a widespread desire for change.

On November 2nd, 2003, elections were held for the Georgian Parliament. These elections were seen as crucial for laying the groundwork for the 2005 presidential election, during which Georgians hoped to elect someone who could move the country forward.

It was suspected that Shevardnadze rigged the elections in his party's favor, and non-violent protests broke out on November 3, 2003, following the announcement of the election results.

This "Rose Revolution," so called for the roses protestors carried, resulted in the resignation of Shevardnadze and new elections being held the following January. Mikheil Saakashvili, a prominent politician and leader of the movement, ran unopposed and was inaugurated on January 25th, 2004.

Read the entire Moment here. "You had to pay bribes to accomplish the most simple thing" 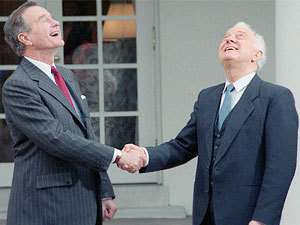 MILES: In 2002, people were not really looking for street action nor were they engaged in conspiracies to oust Shevardnadze. They were going through the motions of the democratic system but with the idea that change was still a year and a half or two years away.

In 2002, crime and corruption were rampant. You had to pay bribes to accomplish the most simple thing, policemen were not paid basically. A police or Customs Officer job was considered a license to steal. Policemen would buy their jobs from the local police chief or the regional police chief or the Minister, depending on how high up the job was, and he would then buy his uniform and his equipment, such as it was, and then he would collect bribes.

Physical conditions in the hospitals, clinics and schools were unbelievably bad. No electricity, no heat, no running water; children and the teachers would have to go out and use an outhouse in the back. Buildings not painted or repaired for 10 years; the windows broken and replaced with a piece of cardboard.

Each child, every day, had to bring in a couple of sticks of firewood to fuel the fire in this little tin stove to heat the class room that day.

In order to get medical care, you would pay the doctor directly -- you'd bribe the doctor in essence to provide you with a little bit of medical care, and your family would bring food for you and maybe a brazier and some charcoal to the hospital ward for a tiny bit of heat....

The issue was Shevardnadze's willingness to implement the decisions that he had made and by the stage of his career when we were together from 2002 to 2003 he either was no longer capable of implementing unpleasant decisions, unpopular decisions or really unwilling to.

The Beginning of the End: The 2003 Parliamentary Elections

Q: The fraudulent election of 2003 -- how did we see that at the time and what happened?

MILES: That is what brought the Shevardnadze government down, basically. This was the regularly scheduled parliamentary election. And it's a real Parliament; it's not a rubber stamp in Georgia.

We felt as the Georgians felt, that the November 2003 parliament election was a rehearsal for the presidential elections in April 2005 and so we wanted to do everything we could to get the Georgian authorities to run an open and honest and decent election. It didn't have to be perfect but it should be something like our own elections, except for Florida I guess, and we really went at it hammer and tongs.

We organized a massive campaign to rectify the voter registration list. That list was just a bloody mess and so through USAID we rented a huge, vacant building, like a gymnasium; we filled it up with tables and chairs, computers, of course, and then we hired a small army of young people who would sit and type these lists precinct by precinct into the computer in a way in which you could cross-check names. The result was a pretty useable list. That cost over $1 million; I think $1.8 million or something to do all that.

Now, I have to confess that, in the end, these lists were often ignored by the various election commissions -- they preferred "their" lists which were easy to manipulate. But where you had a more progressive set of local election officials or a certain balance in the local electorate, then the lists were a wonderful asset. 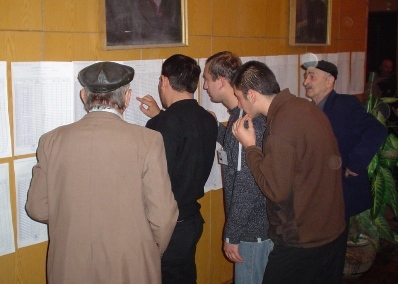 We provided training, which we do in a lot of countries, but we did a lot of it in Georgia. It didn't matter which political party -- the government party, the opposition parties, the radical parties -- we would provide training for them, for election workers, even for people working in the political campaign. How do you run a political campaign? How do you organize a political rally? And so on. How do you do media? We organized working visits to the United States but we also had U.S. experts coming to Georgia. We had a leading American expert on exit polls come to Georgia and help set up a professional exit polling system for Georgia so everyone would have a rough count of how the election was looking as the day went on. This proved quite valuable when I had my conversations with Shevardnadze after Election Day. "Shevardnadze thought this fuss over the election would blow over and that he would be able to get away with this"

Then Election Day came. And actually the first returns on election morning indicated that things were going smoothly but then it got worse during the day and it was clear that the election wasn't going well.

The situation got worse during the day and meanwhile there were 600 foreign observers there in a country of four and a half million people; that's a lot of observers. And they issued a scathing report. My own people reported some of the weird things which they had seen. I went out and looked at a few polling places myself; it was just a debacle.

It was too obvious, too massive, too well documented by the foreign observers and the Georgian observers, too much at odds with the rather scientific exit polling which had been done, and Shevardnadze ran up against a very determined and dedicated and intelligent opposition in the form of [Mikheil] Saakashvili, the [future] President, but also backed up by Nino Burjanadze, the Speaker of the Parliament, and by Zurab Zhvania, who later became Prime Minister, who had been in the government before and had fallen out with Shevardnadze.

And the three of them called for a rally of their supporters down in the main city square of Tbilisi. A lot of people turned out, and to make a long story short they stayed for a month down there during very bad weather; this was already November. Tbilisi has relatively mild winters but it does snow and blow and it can get pretty damn cold and unpleasant. And the people stayed through all that.

The organizers were very good at changing the venue slightly, bringing in entertainment, declaring, "Okay, we're going to take a day off. Everybody go home and have a shower and a hot bath if you can and drink some tea and come back the next day and we'll do this again" and so on. And Shevardnadze just wasn't willing to compromise.

"Saakashvili saw the moment and in an astute, if demagogic, political move, began immediately to call for Shevardnadze's resignation" 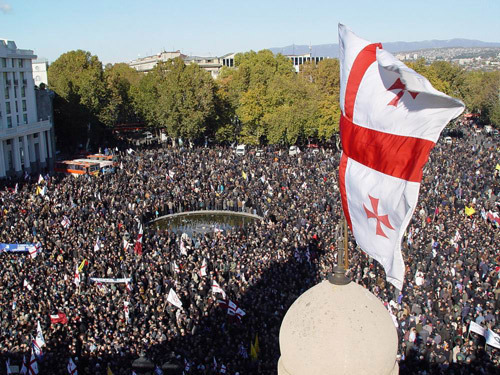 Saakashvili, in contrast to the other leaders of the opposition, had immediately called for Shevardnadze's resignation.

But Saakashvili saw the moment and in an astute, if demagogic, political move, began immediately to call for Shevardnadze's resignation. Neither Burjanadze nor Zhvania had planned to appear continuously at the demonstrations downtown. But they simply couldn't break away --the demonstrations were simply too big and too enduring -- so they began to reappear more frequently than they had planned.

People were already fed up with the Shevardnadze administration. They were unhappy over the poor collection of revenues, the abysmal state of the infrastructure, the failure to pay salaries and pensions and the increase in crime and corruption, and they responded to Saakashvili's repeated demand for Shevardnadze's resignation and so there began to be increasing pressure on Shevardnadze, not just to rectify the election but to resign. In the end it was quite non-violent, quite bloodless. This was the Rose Revolution. It was a major political development and all achieved bloodlessly.

[The roses were] a kind of a gimmick, actually the idea of Mark Mullen, of the National Democratic Institute. I expect he was as surprised as anyone to see the way in which this became the symbol of the democratic movement in Georgia. But it was designed to demonstrate the non-violent nature of the opposition. Amazing, the over-sized role such gestures can assume.

And as the opposition leaders approached the Parliament, and Shevardnadze was already in there speaking, the ranks of the uniformed policemen opened like Moses parting the Red Sea and the demonstrators poured into the Parliament building waving their red roses and declaring that this is an illegal Parliament and people should disperse and go home....

Shevardnadze was hustled out by his security guards, Saakashvili took the podium, the rostrum, and ceremoniously drank the tea out of Shevardnadze's glass that had been left sitting there on the rostrum and declared that the people have taken power, or whatever, and then everybody went home. They actually stayed around the building for a while but basically they went home.... "Some guy in the Parks Department had some very serious fireworks; the instant that resignation was announced, poom, off into the air went these fireworks"

That evening, as usual for the past month, there were tens of thousands of people out in the streets of Tbilisi. This was late at night; I was at the Embassy with the team, and you began to hear this roar.

We were close enough to where the people were to hear the roar of the crowd and at the same time they were broadcasting the news on the TV and on the radio and simultaneously, and I don't know what insightful civil servant had thought about this, but fireworks broke out. I mean, I'm talking about the kind of big fireworks that you have on the mall here on the Fourth of July. 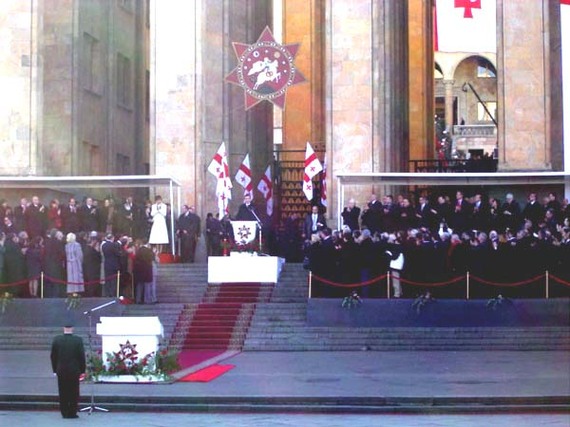 So some guy in the parks department had somehow managed to get his hands on some very serious fireworks and the instant that resignation was announced, poom, off into the air went these fireworks. It was a pretty amazing thing, really.

[Presidential elections were held.] We were very supportive of the new government. [Inauguration in photo]...

And then after that, because the government immediately embarked on a serious reform program, and I'm not saying they did that perfectly...but it was so vastly superior to what the Shevardnadze government had done that there was no question that we would support these efforts and would be very helpful to them in the process. So we began doing things that we would not have dreamed of doing before with Shevardnadze.