Georgie Craig, of Scarborough, North Yorkshire, in England, was diagnosed with global development delay when he was 1 year old, according to his fundraising page. The disability affects his movement and ability to communicate, leaving Georgie, now 3, unable to stand or walk.

After doing research, his parents learned about a form of therapy involving the Therasuit -- a suit that was originally used to help astronauts gain muscle strength after returning from space -- Metro reported.

Specialists who worked with the suit were confident it would help the 3-year-old:

"When all of this started we had no idea what would happen with Georgie, but to hear a specialist tell us that she’s sure Georgie will walk -- that’s just massive for us," Naomi Jamieson, the boy's mother, told Scarborough News. 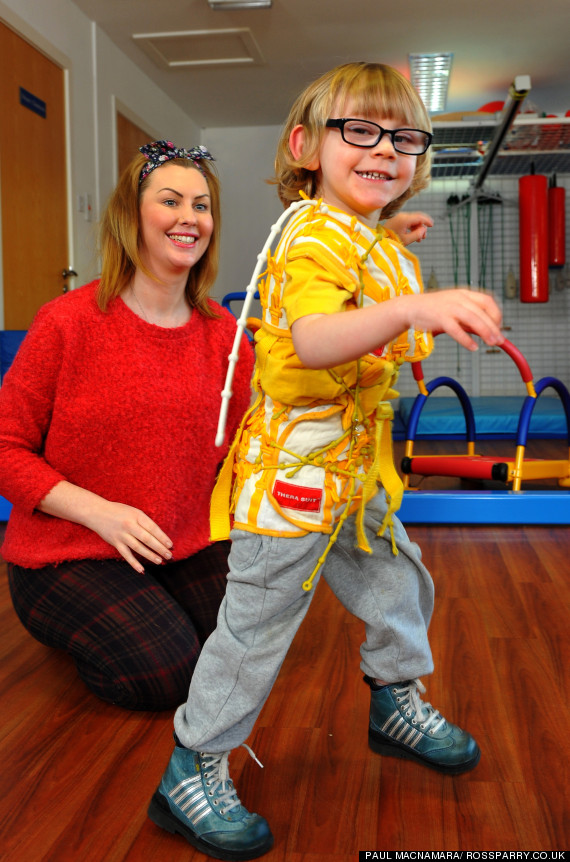 The child began Therasuit therapy last month, and on Dec. 24, walked without help for the first time.

"When he was in the suit on Christmas Eve he took 11 unaided steps. It was the best Christmas present we could have ever hoped for and it really was a miracle," Jamieson said, according to the Daily Mail. " 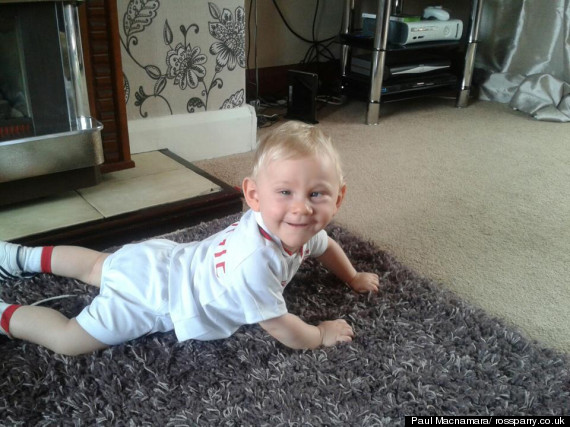 While his therapy has been challenging, Georgie has had some fun in the process.

"Wearing the specialized suit is the equivalent of running a marathon. After he has been in the suit for a few minutes, connections have been made in his brain so he knows what muscles to use," Jamieson said, according to the Daily Mail. "It’s all through play therapy so he doesn’t realize he’s doing any work."

With the strides Georgie is making in his mobility, his parents hope that the toddler will also be able to one day make improvements in his communication skills, as well.

"We just want to give him a better quality of life, and for one day to hold a conversation with him," his mother told Metro.

Watch Georgie walk unaided for the first time in the video above.

To learn more about Georgie or to make a donation toward his therapy costs, visit his fundraising page here.

ハッブル宇宙望遠鏡が撮影した「モンキー星雲」ことNGC 2174
NASA, ESA, and the Hubble Heritage Team (STScI/AURA)
This Hubble Space Telescope photo shows NGC 2174, the "Monkey Head Nebula," located 6,400 light-years from Earth.
NASAのソーラー・ダイナミクス・オブザーバトリーが撮影した太陽フレア
Goddard Space Flight Center/AP
A powerful X-class solar flare, one of three X-class flares unleashed by the sun on June 10 and 11, as seen by NASA's Solar Dynamics Observatory. X-class flares are the most powerful kind.
地球から1500万光年離れたところにある渦巻銀河「M83」
NASA, ESA, and the Hubble Heritage Team (STScI/AURA)
Hubble image of the barred spiral galaxy M83, the "Southern Pinwheel," which lies 15 million light-years away in the constellation Hydra. This mosaic image was released in January.
若田光一宇宙飛行士が撮影した、地球の大気と三日月
NASA
Astronaut Koichi Wakata tweeted this view of a crescent moon rising and the cusp of Earth's atmosphere on Feb. 1, 2014.
地球から2300万光年離れたところにある渦巻銀河「NGC 4258」
NASA/CXC/JPL-Caltech/STScI/NSF/NRAO/VLA
Galaxy NGC 4258, located about 23 million light-years away from Earth, as seen by NASA's Chandra X-ray Observatory.
国際宇宙ステーションのアレクサンダー・ガースト宇宙飛行士が撮影した「レインボーオーロラ」
ESA/NASA
This photo of a "rainbow aurora" was taken by ISS astronaut Alexander Gerst.
土星探査機カッシーニが撮影した土星の環のクローズアップ
NASA/JPL/University of Colorado
This close-up image of part of Saturn's rings was taken by the Cassini spacecraft on June 30. It shows, from left to right, the outer portion of Saturn's C ring and the inner portion of the B ring.
国際宇宙ステーションのレイド・ワイズマン宇宙飛行士がツイートした夜明け
Reid Wiseman/NASA
ISS astronaut Reid Wiseman tweeted this image of a sunrise on Oct. 29. Wiseman wrote, "Not every day is easy. Yesterday was a tough one. #sunrise"
NASAのソーラー・ダイナミクス・オブザーバトリーが撮影した、太陽のコロナループ
NASA/Solar Dynamics Observatory
This image taken by NASA's Solar Dynamics Observatory shows a profile view of coronal loops. Coronal loops are found around sunspots and in active regions.
赤外線写真で撮影された土星の環
NASA/JPL-Caltech/Space Science Institute
This image shows the sunlit side of Saturn's rings. It was taken in red light by the Cassini spacecraft's narrow-angle camera on Aug. 23.
天体写真家ロゲリオ・アンドレオが撮影した「勾玉星雲」ことIC 405
Rogelio Bernal Andreo/Deep Sky Colors
Several celestial objects photographed in the same field of view by Spanish-American astrophotographer Rogelio Bernal Andreo, including supernova remnant Simeas 147, the "Flaming Star" nebula, nebula IC 410, and galactic clusters M36 and M38.
天体写真家リック・スティーブンソンが撮影した輝線星雲「SH2-199」
Rick Stevenson/Flickr
Astrophotographer Rick Stevenson released this photo of SH2-199, also known as the "Soul Nebula," in December. This emission nebula is located about 6,500 light-years from Earth.
地球が属する「天の川銀河」の中にある大マゼラン雲
ESA/Hubble & NASA
This Hubble image shows a portion of the Large Magellanic Cloud, a small nearby galaxy that orbits our galaxy, the Milky Way.
土星探査機カッシーニが撮影した土星の夜明け
NASA/JPL-Caltech/Space Science Institute
A new day dawns on Saturn. The image was taken with the Cassini spacecraft's wide-angle camera on Aug. 23.
1億3千万光年離れたところにある2つの渦巻銀河「NGC 2207」と「IC2163」
X-ray: NASA/CXC/SAO/S.Mineo et al, Optical: NASA/STScI, Infr
The photo is a composite image of the spiral galaxies NGC 2207 and IC 2163, located 130 million light years away in the constellation Canis Major. The image contains data from the Chandra X-ray Observatory in pink, optical light data from the Hubble Space Telescope in red, green, and blue, and infrared data from the Spitzer Space Telescope in red.
1979年に撮影された木星の白黒写真をカラーに
NASA/JPL
In January and February 1979, NASA's Voyager 1 spacecraft zoomed toward Jupiter, capturing hundreds of images during its approach, including this close-up of swirling clouds around Jupiter's Great Red Spot. This image was assembled from three black and white negatives and newly released.
太陽の紫外線
AP Photo/NASA
An extreme ultra-violet wavelength image of a solar flare captured on Sept. 10.
110万5千光年離れた超新星「SN 2014J」
NASA, ESA, and the Hubble Heritage Team (STScI/AURA)
This Hubble Space Telescope composite image shows a supernova explosion designated SN 2014J in the galaxy M82, at a distance of approximately 11.5 million light-years from Earth. It was taken on Jan. 31, as the supernova approached its peak brightness.
大マゼラン雲の中にある「タランチュラ星雲」ことNGC 2070
NASA, ESA, and E. Sabbi (STScI)
An image of the Tarantula Nebula (or NGC 2070), located about 160,000 lights years away, released in January.
「火炎星雲」ことNGC 2024
X-ray: NASA/CXC/PSU/K.Getman, E.Feigelson, M.Kuhn and the MYStIX team; Infrared: NASA/JPL-Caltech
This composite image shows one of the clusters, NGC 2024, which is found in the center of the so-called Flame Nebula about 1,400 light years from Earth. In this image, X-rays from Chandra are seen as purple, while infrared data from NASA's Spitzer Space Telescope are colored red, green and blue.
土星の衛星・テティス
NASA/JPL-Caltech/Space Science Institute
Saturn's moon Tethys captured by the Cassini spacecraft's narrow-angle camera on July 14.
フィラエ無人ランダーが撮影したロゼッタ彗星探査機
ESA/Rosetta/Philae/CIVA
The Philae lander took this portrait of the Rosetta spacecraft on Sept. 7, 2014, at a distance of about 30 miles from comet 67P/Churyumov-Gerasimenko.
「火炎星雲（NGC 2024）」と「馬頭星雲（IC 434）」
Roger Hutchinson/Flickr
A widefield view of the Flame (NGC2024) and Horsehead (IC434) Nebulae in Orion, captured in December by astrophotographer Roger Hutchinson. The pair are approximately 900 to 1,500 light years away.
ロゼッタ彗星探査機が着陸に成功したチュリュモフ・ゲラシメンコ彗星
AP Photo/ESA/Rosetta/MPS for OSIRIS Team
Comet 67P/Churyumov-Gerasimenko, captured on Aug. 3, 2014 by Rosetta's OSIRIS narrow-angle camera.
1500光年離れたオリオン大星雲
NASA/JPL-Caltech
The Orion Nebula, an immense stellar nursery some 1,500 light-years away. This stunning false-color view was constructed using infrared data from the Spitzer Space Telescope.
ワイズマン宇宙飛行士が撮影した国際宇宙ステーション
NASA/Reid Wiseman
NASA astronaut Reid Wiseman captured this image from the International Space Station and tweeted it on Sept. 28, writing, "The Milky Way steals the show from Sahara sands that make the Earth glow orange."
ガースト宇宙飛行士が撮影したオーロラ
NASA/ESA/Alexander Gerst
European Space Agency astronaut Alexander Gerst tweeted this photograph taken from the International Space Station to social media on Aug. 29, 2014, writing, "words can't describe how it feels flying through an #aurora. I wouldn't even know where to begin…."
非常に明るい中心核を持つセイファート銀河のひとつ「NGC 1433」
ESA/Hubble & NASA, Acknowledgements: D. Calzetti (UMass) and the LEGUS Team
This view, captured by the NASA/ESA Hubble Space Telescope and released in July, shows a nearby spiral galaxy known as NGC 1433. At about 32 million light-years from Earth, it is a type of very active galaxy known as a Seyfert galaxy--with a bright, luminous center comparable in brightness to that of our entire galaxy, the Milky Way.