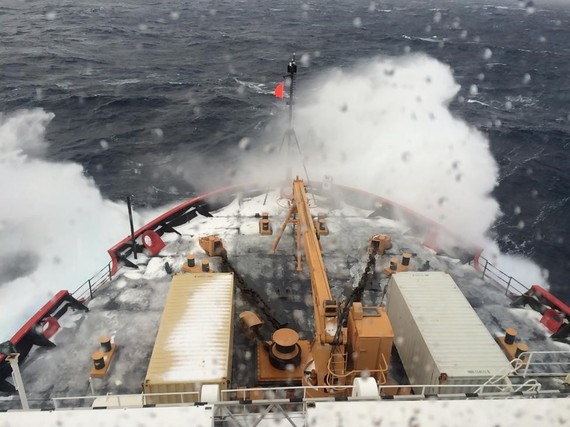 Photo taken from the bridge of the Healy, strong winds blowing sea spray up to the fifth deck of the ship.

This morning the decision was made to abandon the U.S. - Canadian GEOTRACES cross-over station due to rough weather. The cross-over station was designed to compare results with Canadian researchers who occupied the same location in mid-September to ensure the accuracy of our measurements within the international oceanographic community. Over the past two days we have been on stand-by waiting for the winds to subside below 20 knots in order to safely deploy our equipment. We were able to complete some rosette casts to sample radioisotopes, however, attempts to collect water and particles for trace-metal analysis were abandoned as cable lines frayed under pressure from strong surface currents. Rough weather is predicted to stick around this location for days so we are heading south towards our finals stations, and calmer seas.

The Canadian GEOTRACES team also encountered rough seas at this station but the weather cleared long enough to complete their work. The Canadian team's sampling wire also suffered some minor damage, but it wasn't from the weather. A curious polar bear and her two cubs were caught gnawing on the ship's wire, luckily the bears lost interest before any serious damage was done (check out this link for the full story). Perhaps this cross-over station just wasn't meant to be.